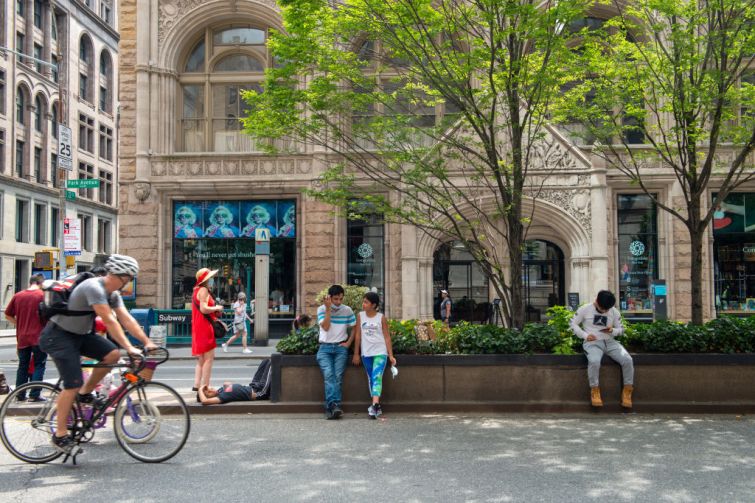 People rest on a traffic island along Park Avenue during Summer Streets by the New York City Department of Transportation on Aug. 07, 2021 in New York City. Photo: Alexi Rosenfeld/Getty Images

A little more park is headed to Park Avenue.

The city wants to find a landscape architect to create a master plan to redesign the enclosed green spaces and traffic medians on Park Avenue in Midtown East, known as the Park Avenue Mall, New York YIMBY first reported.

The 20-year plan to renovate the 11-block stretch from East 46th to East 57th streets would bring back the medians’ historical use as a walking path. Before the iconic mall was paired down in 1927 to make way for two more traffic lanes, the medians were 40 feet wide and were interspersed with benches, bushes and greenery, according to The New York Times.

To design the new public space, the city plans to issue a request for proposal (RFP) in the spring to hire a landscape architect who will create a master plan for the project and work with the New York City Department of Transportation (DOT) on the new design, according to New York City Councilmember Keith Powers, whose spearheading the efforts.

“The pandemic has already accelerated a movement towards a more pedestrian-friendly experience across the city, and this project is a great example of how shifting priorities can help shape a more enjoyable streetscape,” Powers said in a statement.

The project will run simultaneously with the city’s plans to redevelop the Grand Central Terminal train shed directly beneath Park Avenue, which allows for the complete reconstruction of the malls over a 20-year period, according to Powers.

Both real estate and politicians alike hope that the redesign will breathe some life into the central business district of Midtown East, particularly as the neighborhood still struggles under a pandemic that’s forced workers out of offices and kept visitors away.

Landlord Fisher Brothers — which owns several properties on Park Avenue — sponsored an intentionally whimsical private design competition for the mall in 2018. While none of the designs were practical, Winston Fisher, a partner in the firm, hoped it would encourage people to imagine what was possible for the outdoor malls along Park Avenue.

“You can look for inspiration with what they did with the High Line,” Fisher told Commercial Observer. “People will hopefully come from all over to experience and walk and engage and there will be programming and it’s very exciting.

It will engage the workers outside and give them more interaction,” Fisher added. “It should be a lot of fun.”

Fisher said he hopes to see places people can sit and eat, enjoy art displays, bike and enjoy their community with the redesign of the medians. The city is considering a range of potential features — like café-style seating, concessions, walkable bike paths and public events, according to the DOT.

“[Public spaces] are more important than ever,” Fisher said. “This would then create something that is world-class and signature and it would show progress. This is probably one of the most iconic strips of land in the world. Finally, we will have a design that’s reflective of its reputation.”