Cannabis Store Design: What Newcomers Should Aim For 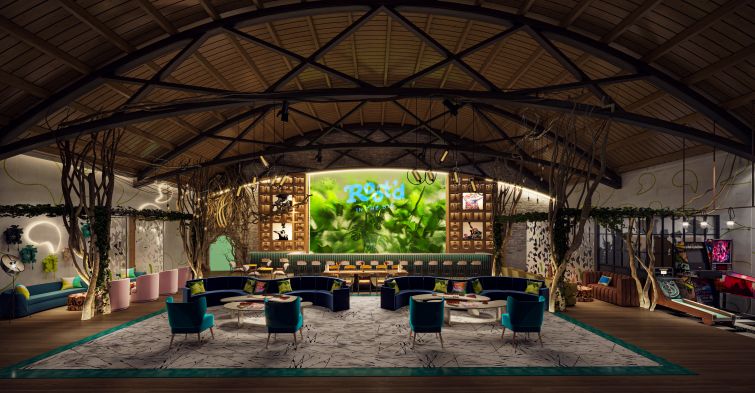 A rendering of the lounge in the Root'd cannabis store in Oakland, Calif., that Rush helped design. Rendering: McBride Company

Since April 2017, the architect has been the head of innovation for The McBride Company, a Manchester, Vt.-based design and concept firm known for its cannabis projects across the country. (The company is also well-known for the designs behind the Margaritaville Hotels & Resorts.) McBride’s dispensary projects include the Root’d store and music venue in Oakland, Calif., the Enlightened store in Chicago and a similar site, the Grass Monkey, in Portland, Maine.

In the designs, Rush and company say they try to destigmatize what was until eight years ago an illegal recreational drug nationwide (and that’s still illegal at the federal level). How? By curating an experience for the customer so compelling that it keeps them coming back, much like Rush helped do for Disney.

Or, as he put it in a December interview with Commercial Observer about cannabis and the most successful stores that sell it: “The product is basically the same. The experience is better.”

Rush said this experiential approach will be essential to helping recreational cannabis dispensaries stand out from each other in New York City, where the first ones are expected to open next year. The city could end up hosting hundreds of such stores. Not all will succeed in what’s already a business bound tightly by red tape and dogged by sometimes dicey financing options — but one that’s nevertheless drawing major players looking to cultivate audiences.

This interview with Rush was edited for clarity and length.

What would be the most important features of a cannabis store in New York?

We’ve been in the dispensary design business probably longer than anyone else. We started with the creation of a dispensary in California called Pineapple Express. It was one of the first design concepts for a dispensary that really adapted best practices from mainstream retail and applied it to an industry that was shady and somewhat unsafe feeling.

What we found over the past five years, especially, is moving toward these more brand affinity-type experiences is just light years beyond fulfilling a commodity or providing a product.

How do you do that?

It’s interesting because it’s different every time. A lot of these companies, especially the young ones, somehow secure a license, and then they get to the point where they realize nothing sets them apart from their competition. That’s because there’s nothing there except their product.

With cannabis, the product is fairly homogenous and the real distinction comes from either farm-to-table-type companies or ones that want to promote some unique aspect of their product. Translating that into the retail environment can involve a huge range of design solutions.

What will happen in New York is the ones that will become most successful will be the ones with multiple locations that have some strong brand affinity to consumers based on a relationship that they create or the product they’re offering, or this kind of luxury distinction that kind of blurs the line between commodity and an idea. Companies like Nike and Peloton; and Lululemon is probably the greatest example — it transcends a product.

For Lululemon, it’s athleisure wear, but what it’s transcended into is this collective group of people who have similar interests and support each other. That even comes down to the retail stores, which function as stores; but they also are yoga studios and they’re educational. We’ve adapted a lot of that approach into dispensary design.

Can you give some examples of what works as far as the design?

It’s a combination of things. A traditional dispensary is one where you have limited access; you select your product either with assistance or by yourself; eventually, you end up standing in a line, paying for your product, and have it given to you. There’s nothing wrong with it. It’s just your typical retail model.

But to come in without the intention of buying something because you want to learn is something we’ve taken advantage of in creating multipurpose retail spaces that can function as almost classrooms or presentation spaces. In the evenings, two or three nights a week, some of these spaces will invite the community to come in and learn the difference between THC and CBD, for instance.

Then we’ve taken it to the next step. We’re building a beautiful dispensary in Oakland, Calif., called Root’d. As part of this, we’re building a huge consumption lounge with an entertainment venue, food and beverage facilities; it’s multi-level. Due to California law, you can’t serve alcohol; but we’re creating cannabis-infused mocktails and appetizers.

It’s located in an historic district in Oakland. You can come there and listen to some great music; you can smoke some weed if you want to, or not, because you could just sit there and enjoy a drink.

That type of connection creates these loyalty instances, which convert consumers into advocates. When you have an advocate for your brand, that’s really the golden opportunity because, now, they will be going to Root’d just to listen to a band. It has nothing to do with cannabis. That’s when you know it’s going to be a big success because that’s really what retailers aspire to: having a reason for people to go besides just to buy something.

How big is the place in Oakland?

The dispensary is about 3,000 square feet, and the consumption lounge is about 9,000.

A lot of the New York operations, though, will be on the smaller side. What can they do, or what works, if they can’t hold events?

New York’s going to be an interesting situation because of the density of the population. The spaces will probably be smaller footprints. It’s going to be a place where dispensaries leverage technology to create a transaction that’s engaging, fulfilling and informative, but also fast. We’ve seen that same thing happen in Boston.

In this case, then, we’re adapting different transaction models. Instead of your typical point of sale, and having to stand in line and tell someone what you want, you’re doing it online before you even go to the dispensary. On an app on your phone, you’re placing an order, you’re learning about the different strains; and then, through a personalized interaction, you’re going to pick up that order.

That’s probably what we’re going to see in New York to begin with because the demand, the popularity, will be so high.

Then, as the competition wanes, the ones with the strongest brand stories with some messaging or some way to create a relationship with a consumer are going to be the ones that become more successful. We’ve seen this before, where one location becomes two, becomes four. Suddenly, it takes on this critical mass where they want to be able to communicate with their fans; and they do so through choice, but also through very curated communications, engagement, reward programs, reasons to go that make a consumer feel special — nothing new in retail but definitely new in dispensary design.

I’ll go back five years, to where a dispensary could be any hole in the wall. The product could be housed in glass cases lifted from whatever house or sale they could find, and a bunch of stuff in cardboard boxes.

The ones that did well created environments that felt safe, or that looked like there was intelligent thought and design put behind it, that gave someone confidence that this was legit and that they wanted to be associated with this brand. That’s as simple as I can put it.

This concept of intelligent design, we live every day. We tend to move away from the things that look amateurish or unprofessional or somewhat nefarious even, and more toward brands that have a strong belief, something that aligns with my beliefs; or something that I find interesting and I want to hear from them, I don’t consider their email to be spam — I can’t wait to open it.

The one thing that does promote well is the idea that I’m going to get something that somebody else isn’t. “Wow, I bought a bunch of product and now I’m about to get a reward.” Again, nothing new about that in retail; but when you apply that to the cannabis industry, the markup traditionally is so high that the value and the perception of –  I got something that someone else didn’t because I’m special – that’s a really, really powerful tool. And it costs dispensaries nothing to say, “Look, this is the second time you’ve been in here. We’re going to give you three rolled joints just for being a great customer.” That guy’s not going anywhere else.

Has your work at Disney come into play with this sort of design?

Absolutely. I worked for Disney for 17 years as a vice president in the imagineering group. My team did retail around the world.

The idea of a storyline and suspension of disbelief, we apply to all of our designs. McBride continues to be the designer for Margaritaville and all of its properties, which range from cruise ships to luxury hotels to casinos to resorts. We apply the same principles from the smallest dispensary to the largest casino. There is the creation of an environment where you can transport someone or convey this idea that belief is suspended because now you’re in a different place and it has a different feel.

That is basic design. That has not been traditionally applied to dispensary design because of the newness of the industry and you didn’t need that to be able to succeed. Now it turns out you do need that line of thought.