Curaleaf, Trulieve, Green Thumb and others are adding dozens of retail spots and pocketing billions in profits 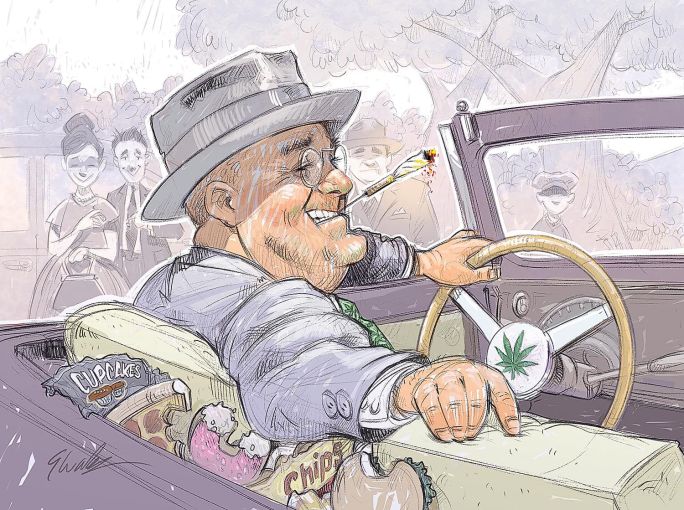 At a private White House dinner on March 12, 1933, Franklin Roosevelt told his guests he planned to draft a message regarding pending congressional legislation that would legalize the production and sale of low-alcohol beer.

The move would bring an end to 13 years of alcohol prohibition, and would prove a boon not only to the brewing industry, but also to the coffers of federal and state governments. They would get to tax alcohol again (and wealthy Americans, Roosevelt’s original constituency, might get a break on their taxes, which they’d been paying a lot more of since the 16th Amendment enshrined a federal levy on personal incomes 20 years earlier).

The famously bibulous Roosevelt, whose Democratic Party had swept to power the year before, in no small part on a promise to legalize recreational alcohol, made it clear to his dinner guests what the thrust of his message would be, according to the later memoir of one of those guests.

“I think this would be a good time for beer,” the president told them. (The remark is often misquoted on t-shirts, coasters, posters, mugs, etc., as FDR saying ” … for a beer.”)

The 21st Amendment toward the end of 1933 would officially finish off what the president and his Capitol Hill allies unofficially sent reeling.

Not since Roosevelt’s jolly remark has a vice been as poised for a financial boom as marijuana is now. Its industry’s largest companies are worth billions of dollars each, and its footprint is expanding behind a wave of legalization. There are challenges, but they’re seen as navigable the more that U.S. markets open up to weed.

In April, New York became the 15th state to legalize recreational marijuana for adults; D.C. also allows it. The move, of course, opened America’s largest city to recreational marijuana, and further cemented what seems like an inevitable trend toward legalization in at least most of the country.

At the start of 2021, there were 10 publicly traded marijuana companies with stock values of at least $2 billion each, according to information published through the Nasdaq (the list includes a firm that specializes in cannabidiol, a derivative of cannabis). These companies, too, reflect who are likely the most powerful players in the business.

Medicinal marijuana sales have seeded most of their value and potential. It’s far easier for existing companies that specialize in dispensing marijuana for prescribed medical purposes to transition to recreational sales than it is for new companies to break into the space.

With a $7.92 billion valuation, Curaleaf Holdings, under CEO Joseph Bayern and operating out of the Boston suburb of Wakefield, is the most highly valued pot stock in the U.S., according to the Nasdaq information, which was assembled by analyst Sean Williams. It started purely as a medicinal marijuana dispensary operation.

But, with its move into the recreational space, the Nasdaq expects it to be the first U.S. marijuana operation to clear $1 billion in annual sales, and it seems to be well on its way in 2021. Curaleaf ended the first quarter of the year with 102 medical and recreational retail locations, and its retail footprint covered 42 percent of the U.S. population, processing nearly 20,000 transactions daily, according to Curaleaf’s first-quarter earnings call on May 10. That represented a 12 percent annual increase during the quarter.

“Based on the breadth of our platform, the strength of our balance sheet, and our experienced management team, I believe we are uniquely poised to take advantage of the explosive growth ahead as the industry continues to grow to $100 billion and beyond,” Christine Taylor, Curaleaf’s senior vice president of financing and accounting, said on the call.

The world’s most valuable marijuana company — Canopy Growth, worth $9.18 billion as of January and with a large U.S. footprint — is based in Canada, which, in late 2018, became the second country behind Uruguay to legalize the drug.

Potential growth aside, the industry’s most powerful players face sometimes unique challenges amid the patchwork of regulations that shadow a business operating in several different states and D.C., rather than under one federal umbrella. This is especially true on the retail end for recreational sales. Companies must land the necessary vending licenses to open a store, and, oftentimes, they must ensure that this licensing lines up with the store’s opening.

Some states, including California, require that companies first have control of a particular retail site before they can even apply for a license. Also, there is usually a fixed number of marijuana sales licenses in a particular state, ceding the more established names in the business that much more power.

The biggest challenge, though, is at that federal level. U.S. authorities list marijuana on the schedule of particularly dangerous drugs — right there with heroin and LSD — and that precludes conventional financing avenues, such as commercial and investment banks. That leaves public stocks as well as private capital to fill the void.

The biggest private equity firm investing in marijuana is probably Privateer Holdings, led by Executive Chairman Brendan Kennedy. In 2016, it became the first PE firm to raise $100 million for the marijuana space. Tuatara Capital, under Chairman Mark Zittman, is also particularly active. A marijuana-focused, special purpose acquisition company that it backed raised $175 million in a public offering in early 2021, the company said.

The battle for property that this red tape sets up has also made a power player out of Ryan George. He started online clearinghouse 420Property for marijuana-friendly listings in 2016 after a career in real estate, including as a commercial leasing broker. The site recently relaunched and expanded (see Power 100 Honorable Mention page 127).

Treating marijuana as a dangerous drug also prevents business owners from deducting certain business expenses. This leads to much higher taxes for cannabis companies, nevermind to expensive audits when some of these same companies try to work around the tax code.

For all his lionization of FDR — he had the 32nd president’s portrait hung prominently in the Oval Office — President Joe Biden remains opposed to legalization. For now, that ensures that legislation descheduling marijuana that passed the U.S. House in December is going nowhere. The industry’s most muscular players will continue to accrue power behind state-by-state legalization.

Should Biden ever follow his hero’s lead, though, alcohol’s rise shows just what could happen with marijuana. Within a few decades of that White House dinner in March 1933, America was the world’s largest beer market, and, by the early 21st century, the world’s largest wine market, too.

It’s now poised this year to overtake China as the largest e-commerce market for alcohol as well, with the value of that niche alone expected to exceed $40 billion by 2024, according to analytics firm IWSR.