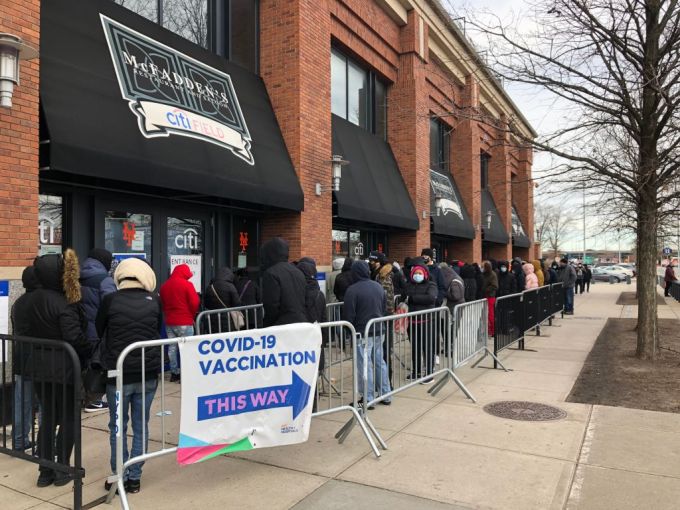 New York City’s vaccine mandate for private-sector workers went into effect on Monday despite some ire from the business community and at least one potential class-action lawsuit to block one of the last Bill de Blasio-era policies.

The mandate applies to in-person and public-facing workers — not remote staffers or people who don’t come into contact with other employees or customers, according to the city. Private workers can get exemptions for religious or medical reasons and businesses can be subject to a $1,000 fine for refusing to comply. However, de Blasio has said that city inspectors who check will “ideally” avoid penalizing businesses except for those who simply refuse to cooperate.

De Blasio, in his last week as mayor before Mayor-elect Eric Adams assumes the position on Saturday, announced the mandate on Dec. 6, after the Occupational Safety and Health Administration (OSHA) paused enforcing a similar federal private-employer vaccine requirement for businesses with more than 100 employees in November, due to a legal battle in federal court. The city mandated that all municipal workers must be vaccinated against the coronavirus by Dec. 1 at the latest.

Most large employers in the city were preparing for the federal vaccine mandate, though smaller companies may have been a bit more surprised by de Blasio’s mandate, Kathryn Wylde, president and CEO of the business organization the Partnership for New York City, told Commercial Observer.

“Most [larger] businesses had set up their protocol and plans based on President Joe Biden‘s private sector mandate,” said Wylde. “For small businesses that were not covered in the president’s mandate, that were not prepared, they don’t necessarily have the resources … in terms of people. They’re having trouble hiring enough people.”

Local businesses were certainly concerned when the mandate was announced in early December, as many small companies lack the legal or human resource departments to help manage a staff member’s medical or religious exemptions, said Thomas Grech, president and CEO of the Queens Chamber of Commerce.

“There’s concerns around a small business — who does not have a lawyer on staff, any kind of legal representation [or] any kind of HR department — being requested and required to review employees who have a request … for a religious exemption or a medical exemption,” Grech told CO. “These small businesses don’t have the wherewithal or the means to be able to do that.”

When the program was first announced, Grech said the Chamber of Commerce’s phones went off the hook with calls over questions about the new rule, but he thinks the business community, and New York as a whole, understands the importance of getting vaccinated to help limit the spread of the virus that has severely hurt the city’s economy, particularly its local restaurants, businesses and tourism industry.

“We’re 22 months or so into this pandemic,” said Grech. “So I think people’s responses to this have been muted as far as fighting [the mandate]. I think people look at it as, if we’re going to get this thing done and over with … let’s do everything we possibly can to get our people vaccinated, and where necessary, to wear masks.”

And businesses have already felt the pain caused by a surge in the more-contagious omicron variant. In Brooklyn, 77 percent of businesses saw a reduction in holiday sales and 20 percent temporarily closed their doors over the holidays, according to a survey from the Brooklyn Chamber of Commerce.

In the past two weeks, more than half of businesses surveyed had a staff member test positive for the virus and 59 percent reported that employees had called out sick from work in the last three weeks. An overwhelming majority, at 94 percent, supported the city’s mask mandate.

“Omicron has taken all of us by surprise, and the toll on small businesses during this holiday season has been staggering,” Randy Peers, president and CEO of the Brooklyn Chamber of Commerce, said in a statement. “Just when many of our small businesses were hoping to make up some ground for losses incurred throughout the pandemic, they now face another uncertain winter as we head into 2022.”

Just under 81 percent of New York City residents are at least partially vaccinated against the coronavirus and just under 72 percent have received two doses of the vaccines. The mandate is intended to get those numbers even higher, as a wave of coronavirus cases skyrockets above 20,000 per day in the city.

Larger companies were less perturbed by the mandate, which in many cases, already mirrored existing policy within the banking and commercial real estate industries. Goldman Sachs has had a vaccine requirement in place since Sept. 7, a spokesperson told CO, and recently decided to require employees to get COVID-19 booster shots as well. Some of the first companies to announce vaccine mandates were the The Durst Organization and the Related Companies, which both required staffers to get vaccinated by the end of August or early September. So the policy itself may be mostly unneeded for large companies like Durst, Jordan Barowitz, vice president of public affairs for Durst, told CO.

“It’s mostly symbolic for large employers who have vaccine mandates in place but for smaller employers who are struggling with labor shortages, it’s quite onerous, which isn’t a formula for good public policy,” said Barowitz.

It’s unclear how burdensome the policy will be on small businesses, given both de Blasio and Adams’ plans for its more relaxed enforcement. Adams announced on Thursday that he plans to keep the policy with a focus on compliance, not punishment, and Grech was optimistic about Adams’ upcoming tenure.

“We’re really looking forward to the new administration to go in there and offer some more balanced responses to this pandemic, and to really get all the city workers vaccinated and anybody that gets in contact with the public,” said Grech.

And employers are taking the policy seriously, added Wylde.

“I think no one wants to defy the law and this, the mandate is an executive order — it’s the law,” said Wylde. “It’s a matter of the $1,000 fine, but it’s [also] the reputational risk associated with defying the law. They are taking it seriously, but hoping for a reprieve.”

And for those that don’t, there’s a class-action lawsuit already underway against the vaccine mandate.

Staten Island-based law firm Fonte & Gelormino is forming a suit on behalf of any employee in the private sector or private school, according to the firm’s website. The firm’s online description of the legal action states that it has “literally received hundreds of calls from [sic] requesting our advice and help,” about the mandate.

The law firm did not immediately respond to a request for comment.

Update: This story was updated to indicate that Eric Adams will keep the COVID-19 private-sector employer vaccination mandate in place into 2022, he announced Thursday.