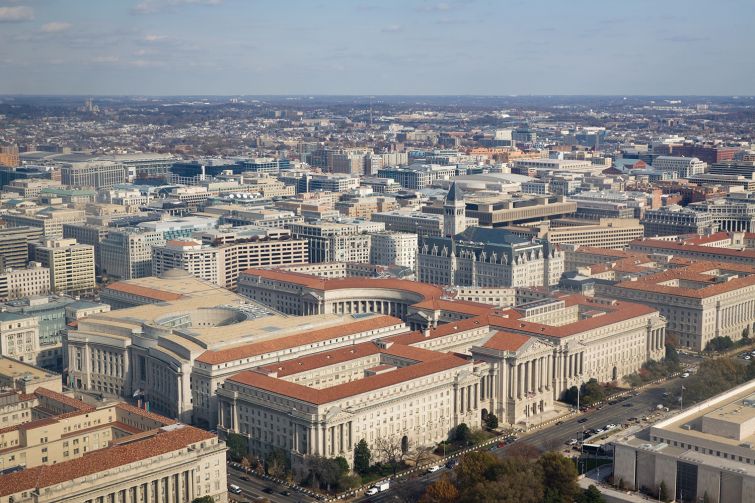 Vacancy in Washington, D.C., is at an all-time high of 18.2 percent, exceeding the 18 percent mark for the first time ever, according to a third-quarter office report from CBRE.

The delta variant is the main culprit for the increase, as much of the positive momentum in leasing from Q2 dissipated, the report noted.

One deal at the very end of the quarter was a big driver in the gross leasing volume ending at 3.1 million square feet. Just this week, the Securities and Exchange Commission announced a 1,274,000-square-foot prelease at Douglas Development’s 60 New York Avenue NE project.

Tech companies are the one bright spot in the District, with 365,000 square feet of leases signed this quarter, which represented 9 percent of all activity in the market.

The Northern Virginia office market showed encouraging early signs of improvement in the third quarter, following four quarters of disrupted activity. Gross leasing activity held steady over the prior quarter to end the quarter at 2.1 million square feet. While this is still a 22 percent decrease from the 2018-2019 quarterly average, it showed a marked improvement from the second half of 2020 and first quarter of 2021, with an average leasing volume of 1.7 million square feet.

Still, even with these improving metrics in the NoVA market, vacancy increased 10 basis points over the prior quarter to 20.6 percent, an increase of 160 basis points from the beginning of last year, approaching the market’s peak vacancy level of 20.9 percent from the first quarter of 2018.

Commercial Observer: How would you illustrate what we saw in D.C. as it relates to vacancy? What does this record number tell us?

Wei Xie: Not unlike other U.S. gateway markets, D.C. office demand declined from the economic impact and effects of remote work due to the pandemic — 3.3 million square feet of negative net absorption since Q1 2020 has contributed to the continued elevation of D.C. office vacancy. That said, Q4 2020 recorded the greatest amount of negative net absorption, with each of the subsequent three quarters reporting less occupancy loss, which hopefully is an indication that the worst is now behind us. Additionally, nearly 1 million square feet of the 3.3 million square feet total occupancy loss was attributable to preleases signed before the pandemic and unrelated to COVID.

Why do you believe subleasing is dropping so drastically?

Similar to the net absorption story, sublease availability peaked in December 2020 and has since been on a consistent trajectory to stabilize and improve. Some tenants initially decided to sublease space as a knee-jerk reaction to the pandemic and remote work, but have since recognized their need for office space after all and reversed their decision.

Some of the decline is also attributable to expired lease terms and sublease space becoming prime space directly marketed by the landlords. A combination of fewer tenants adding their space to the sublease market, and more spaces being removed from the market, is expected to continue to moderate sublease availability. This is also the case nationally, however D.C. has led other U.S. markets in this trend line.

Why are tech firms an important sector for D.C.?

Not only has tech contributed to more occupancy gains in D.C. — both before and during the pandemic — than any other industry sector, it has also contributed 9 percent of all leasing activity since January 2019, three times its three percent share of the market’s total occupied space.

As the District’s two largest tenant groups, the federal government and law firms both have been on consistent trajectory of contraction and densification of their office footprints. The tech sector has provided the much-needed growth and leasing activity to help boost demand and market momentum. Growth from tech in D.C. has been broad-based, both from big tech, as firms expand their presence outside of the West Coast, and from local, home-grown firms that continue to attract funding and grow their business in a robust fashion.

In 2020, D.C. regional tech firms have attracted more than $3.5 billion in venture capital funding — a record high for the region, and 2021 is on pace to break the record again. Most of the funding has been directed to tech firms that service a wide variety of industries, from education, financial services, to energy, health care, government and cybersecurity.

What can you project about the next few months of what we will see in the District regarding vacancy?

Without significant expansions or new market entries, D.C. vacancy will likely continue to rise in the near term, as a few more projects are set to deliver adding vacant space to the market, and tenant contractions will likely persist in the next three to six months. However, trophy and Class A+ product will remain the tighter segments of the market, as quality large blocks of space in core submarkets remain measured and the construction pipeline is expected to pull back significantly as compared to the past five years.

What is contributing to Northern Virginia’s slight turnaround?

Northern Virginia has traditionally been a “large tenant market,” where a handful of large tenant movements could dictate headline stats. During the third quarter, most notable lease transactions were flat renewals or extensions that did not involve space givebacks. Additionally, Amazon leased another 167,000 square feet in National Landing that represented net new demand.

That said, the delta variant surge has led to a pullback in tenant touring activity during the quarter. However, the rate of decline was a lot less pronounced in Northern Virginia as it was in Downtown D.C. This is consistent with trends in the past 18 months, where suburban markets have been less immediately affected by the pandemic than downtown, higher-density markets.

Are there concerns about the rising vacancy?

Thanks to expansionary tenant activity mostly by tenant firms, Northern Virginia office vacancy actually trended down in recent times before COVID effects kicked in. From the peak in Q1 2018 to Q2 2020, overall vacancy decreased 200 basis points from 20.9 percent to 18.9 percent. Although we have lost some of the occupancy gains during this time, there continue to be tenants in the pipeline looking to materially expand their presence in the market, which helps position the market to rebound after the COVID effects subside.

That said, the exact level of impact from remote work will remain to be seen. But we believe in the underlying strengths of the market in terms of talent, infrastructure and pro-business policy, all of which should continue to attract employers to our region.

What sectors can help NoVA? Who is leasing space?

Tech, business services and consulting, financial services, education are among some sectors poised for growth.