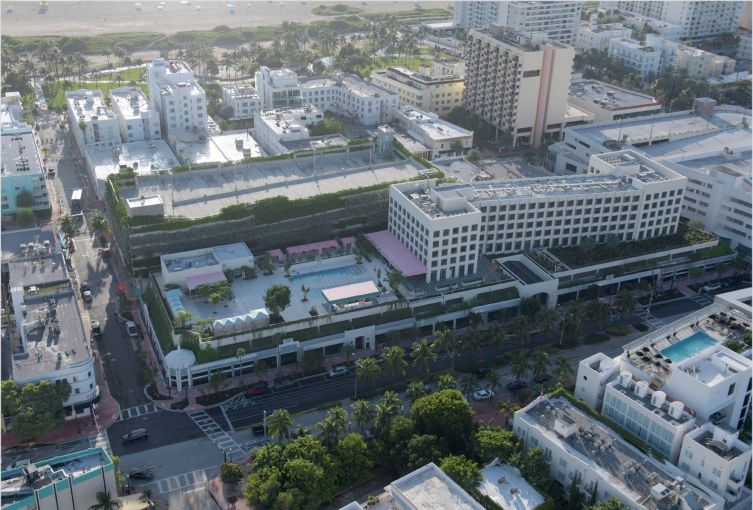 An aerial view of The Goodtime Hotel. Photo: W&D

Walker & Dunlop’s (W&D) New York debt and equity capital markets team spearheaded the arrangement of the debt on behalf of Imperial. The team was led by Aaron Appel, Keith Kurland and Jonathan and Adam Schwartz, who worked alongside Ari Hirt and Sean Bastian to source and negotiate the financing on the 266-room luxury hotel, which has quickly become a Miami hotspot.

“This was one of the most highly anticipated projects in Miami Beach, and we received an outpouring of interest from the capital markets on this transaction,” Jonathan Schwartz said.

Located at 601 Washington Avenue in South Beach, the hotel features a 30,000-square-foot space that hosts a restaurant called Strawberry Moon operated by Groot Hospitality, a company run by Grutman. The eatery opens up to a rooftop pool and club area that hosts live music. The hotel also has around 46,000 rentable square feet of ground-floor retail space and 242 parking spaces.

The hotel was built by Imperial Companies, a New York-based development firm co-founded in 2014 by Fascitelli and Birnbaum, who lauded W&D for its work in securing the debt via a statement provided to CO.

“The Goodtime Hotel is one of the most iconic hotel offerings in Miami,” Appel said. “The property’s luxurious rooms feature many different sizes and appeal to a wide range of travelers.”

The official opening celebration of the hotel — which was several years in the making — in late April saw a host of celebrities attend, including Kim Kardashian, David and Victoria Beckham, Vanessa Hudgens and reggaeton icons Maluma and Bad Bunny, among others.

The first few months that the hotel was open proved to be raucous. In late July, The Real Deal reported that the hotel was at risk of losing an entertainment permit on its roughly 26,000-square-foot rooftop pool deck, due to almost 30 noise violations.

Miami Beach’s planning board was due to hold a hearing Tuesday about revoking the permit for the pool deck, TRD reported. A legal representative for the hotel insisted in the summer that eliminating the rooftop entertainment component would prove detrimental to the success of the development, adding that the operators of the hotel had already taken measures to soundproof it and stop headlining DJs in the space.