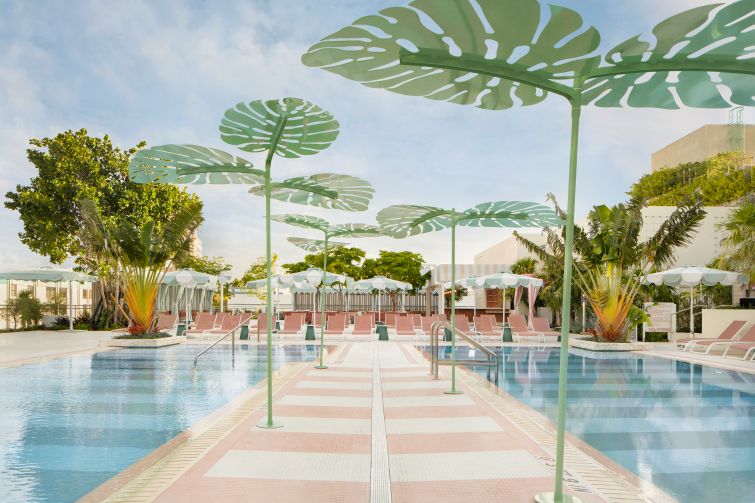 Named The Goodtime — an ethos that encompasses all of Grutman’s enterprises — the 266-room, lifestyle hotel is poised to reinvigorate the Washington Avenue entertainment corridor, a stretch of South Beach’s Art Deco district that runs from Fifth to 17th streets, which has fallen out of fashion over the last decade.

Grutman first arrived on Miami’s scene in 2008 as managing partner of LIV, the now-legendary nightclub, inside the historic Fontainebleau Hotel. Once a haunt for The Rat Pack, and a set piece for James Bond’s “Goldfinger” in the 1950s and 60s, the reimagined resort reopened with its own celebrity cache. Whether it was LeBron James celebrating the Miami Heat’s NBA championship or the Kardashians partying in the DJ booth, LIV established itself as a bona fide hotspot, promising an epic night out fueled by heavy-hitter headliner DJs, from David Guetta to Tiësto, week after week.

In 2013, Grutman followed up with sister nightclub Story, on the opposite side of Miami Beach at 136 Collins Avenue in the upscale South of Fifth neighborhood, before making the leap into restaurants and beyond Miami Beach in 2015, when he opened Komodo, a clubby pan-Asian restaurant in the Brickell Financial District. Grutman’s Groot Hospitality continued its growth, opening buzzy, see-and-be-seen restaurants from Swan in the Design District, his first partnership with Williams, to Papi Steak in South Beach.

“I want to create an ecosystem for myself,” Grutman told Commercial Observer of his business philosophy. “We create environments for people to eat at, to party at. They all connect with each other. For me not to do a hotel would be just criminal at this point.”

When The Goodtime Hotel opens on April 15, the experience will be more akin to next-generation hip, stylish, accessibly priced lifestyle hotels that have cropped up in the area in recent years, rather than the luxurious opulence of the pricier oceanfront resorts along Collins Avenue. For comparison, The Goodtime’s opening rates advertised on its website start at $269 a night, while rooms at the Fontainebleau start at $447, and the most expensive rooms on the beach can easily run upward of $700 in high season.

“We’re really hyper-focused on it being an experience,” Grutman said. “It’s a very whimsical property and it’s really geared to meet the needs of today’s traveler.”

The six-story, newly built hotel, designed by architect Morris Adjmi, with a corrugated concrete facade and lush atrium entryway, spans the entire city block between Sixth and Seventh streets with 45,000 square feet of ground-floor retail. To set the scene for a good time, Grutman and Williams tapped Swan collaborators Ken Fulk for interior design and Raymond Jungles for landscape architecture.

The property is anchored by Strawberry Moon, a restaurant that opens up to a 30,000-square-foot pool club, serving Mediterranean fare day and night. There’s also a gym and library lounge.

While rooms are decidedly tiny, starting with queen rooms at 180 square feet (a category that’s becoming known in the industry as “micro-sized”), Fulk’s pretty and playful touch is in full effect in a palette of pastel pink and green with custom bedding, leopard-print benches and bathrobes, and marble and brass bathrooms with rainfall showers and Ortigia bath products.

“We want The Goodtime Hotel to impart a feeling of both revitalization and that rare, exciting thrill that takes over when you discover something special,” Williams said in a statement. “It’s that adrenaline-fueled sensation of entering a whole new setting and a whole new mindset. This place will provide a natural good time, for all who come through.”

“Years ago, when we started construction of The Goodtime Hotel, we bet big on Miami as a city and Washington Avenue,” Fascitelli said. “We are thrilled to be a part of such a unique destination and experience on South Beach. The revitalization of Washington Avenue is synonymous with our success.”

While Washington Avenue’s storied past dates back to the 1950s — with the 5th Street Gym, where Muhammad Ali famously trained, and the Jackie Gleason Theater, which operates today as The Fillmore — the street had its modern heyday in the 1990s, when Prince owned a nightclub there, and it was not unusual to see the likes of Madonna or Gianni Versace out for a night on the town.

In the 2000s, as development enthusiasm turned from Miami Beach to mainland Miami neighborhoods like Wynwood, the Design District, Brickell and Doral, Washington Avenue fell into neglect and disrepair with many storefronts abandoned.

“Everything has its ebbs and tides,” said Troy E. Wright, executive director of the Washington Avenue Business Improvement District, which formed in 2019. “If you don’t modify to constantly make change, you’re going to fall behind, because there’s a different generation with a different philosophy with other options available.”

Through the BID, Washington Avenue’s property owners have banded together to proactively plan for the area’s future by revitalizing the street’s arts and cultural programming, and improving its transportation, sanitation, security and landscaping. In the last year, they’ve closed a lane of traffic to facilitate “parklets” for outdoor dining and added a bike lane. The street’s seen a 15 percent increase in pedestrian traffic.

One of the biggest challenges facing Washington Avenue is perception. From raucous Spring Break crowds to a shooting outside an area restaurant earlier this year, its reputation is also in sore need of a makeover.

Wright’s plea to both locals and visitors: “Don’t judge Washington Avenue based on what you may have experienced previously or what you’ve heard on the news, because we are so far ahead of that. There is so much more to offer with the new hotels, lounges and restaurants. It’s a breath of fresh air. People really need to see and experience it for themselves.”

He’s in good company. While The Goodtime will soon be Washington Avenue’s newest hotel, it’s joining a handful of neighboring properties owned by both local hospitality groups and national developers who have a stake in the area’s success. Moxy Miami South Beach, a Marriott International brand, opened in February inside a newly built, eight-story tower at 915 Washington Avenue, developed by New York-based Lightstone.

And there are more hotels planned on the horizon, including the reopening of the Washington Park Hotel, a campus of five historic, Art Deco buildings at 1050 Washington Avenue, which was recently purchased for $44 million by Jean Simonian, a Beverly Hills-based entrepreneur.

But it was Marc Lawrence of Miami’s LBL Group who created the blueprint for the successful, locally owned boutique hotel on Washington Avenue, when he restored a charming 1930s Mediterranean Revival building in 2008 to create the Angler’s Hotel at 660 Washington Avenue. In 2013, he struck a management partnership with Kimpton Hotels, and, in 2018, the property debuted a modern, newly built tower addendum with a rooftop pool.

“The hotels are the catalyst for change,” Wright said. “If we look at the upscale clientele that they plan to bring, then you automatically change where we’re going and what people expect when they get here.”

While Grutman’s sights are set on scaling his brands in other cities, there’s still plenty of good times on the horizon for Groot Hospitality in Miami. “I could live anywhere,” he said. “I choose to live in Miami because I really, in my heart, think it’s the greatest city out there. It has culture, it has a vibe, it has an energy. It’s a real, authentic thing. And it’s growing so fast. To be a city that’s so forward thinking and bringing in new business, like tech, it’s just an exciting place to live. We have it all.”