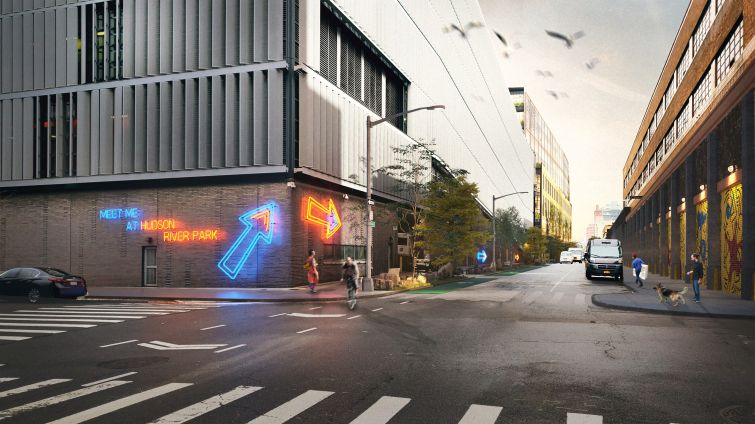 The money — funded project by project by the BID — will go towards a gateway sculpture on Greenwich Street; an east-west corridor for pedestrians, bikers and cars along Houston Street; and a pedestrian bridge from Spring Street over the West Side Highway to Hudson River Park, according to the BID. The $40 million bridge will be funded separately from the other neighborhood changes.

“This plan builds on our work and vision for the neighborhood and incorporates lessons we’ve learned from the pandemic about open space, mobility and community,” Ellen Baer, president and CEO of Hudson Square BID, said in a statement. “Our goal is to provide a great experience for those who work, shop, play, and live here.”

While it’s unclear what parts of the project would be funded first, the BID provided a breakdown of costs for each aspect of the project in a report.

The BID expects the additions of arts, programming, expanded sidewalks, outdoor lighting, sculpture and expanded pedestrian crossings on Greenwich Street to cost around $16 million. It anticipates spending $5.5 million on a raised bikeway, wider sidewalks and art murals on West Houston Street; and another $500,000 in the short term on trees, lighting and artwork connecting Hudson Square with the nearby Hudson River.

The investment in the square comes as large media and tech companies are settling in the area. Disney acquired a full block in Hudson Square for $650 million in 2018 for its new 1.2-million-square-foot headquarters at 4 Hudson Square, designed by Skidmore, Owings & Merrill.

Google already put down roots in the area with a $1 billion campus across three buildings ​​near the West Side Highway and the Holland Tunnel. The properties — at 315 and 345 Hudson Street — house part of the tech giant’s sales division.

And last week, Google bought the St. John’s Terminal project for $2.1 billion, with plans to redevelop the property it has leased since 2019, ​​at 550 Washington Street, into part of the company’s East Coast hub.

The BID plans to cover the operating costs of the project, which follows a $27 million, five-year Streetscape Improvement Program launched in 2012. The BID’s first improvement program planted trees, widened sidewalks and installed public seating, Commercial Observer reported.  The city of New York covered half of the cost of that $27 million plan, with the other half funded by the BID raising money through capital bonds, which also covered operating costs, according to a statement from the BID.

The latest project would push Hudson Square’s transition further away from its industrial vibe, which started after it was rezoned in 2013 to create a special Hudson Square District. The rezoning allowed for the construction of more than 3,200 units of housing — 20 percent of which are affordable — open-space facilities, small retail destinations and a school, CO reported.

While the timeline for the project is still yet-to-be determined, the BID has already contracted architecture and design firm WXY to plan the current Hudson Square revamp, which would also provide for more public art and programming along Greenwich Street, according to a statement from the BID.

“Hudson Square is at the vanguard of how to make streets work better for everyone,” Claire Weisz, WXY founding principal and architect, said in a statement. “With the focus on enjoyable connections for walking and cycling between subways, and north and south along the Hudson River, this plan is a timely blueprint for how to connect, activate, and innovate on New York City’s sidewalks, curbs and streets.”