Hip to Be Square: Residential Developers Look to Make Hudson Square the Place to Be 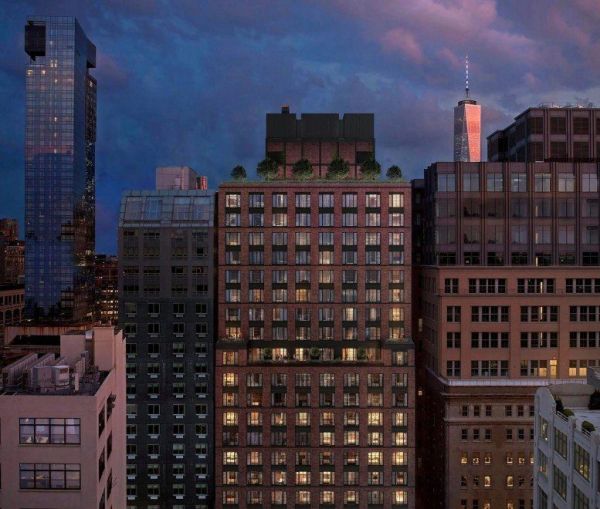 There was a time not long ago when Hudson Square was regarded as little more than a place to pick up your printing.

But the area, until recently the main district for printing companies in New York and one that fostered a strictly industrial and office climate, is in the midst of a residential revitalization with six major developments either in the works or already occupied.

“If you talk to people of a certain age from advertising or law, they remember coming down here to get their documents printed at all hours of the day and night,” said Ellen Baer, the president of the Hudson Square Connection, the business improvement district for the area bordered by West Houston Street to the north, the Hudson River to the west, Canal Street on the south and Avenue of the Americas on the east.

“So we have these big loft-like buildings that were built for industry and occupied by the printing district for many years,” she added. “As the printing district started to move out, the place was discovered by the creative class in the dot-com era because of our large open-floor plans and light, loft-like spaces, and bright sunlight offices. It really attracted the young digerati, and that’s continued on into the present.”

The BID, which has an annual budget of $2.5 million, has played a part in the transition. Hudson Square Is Now, the organization’s $27 million, five-year Streetscape Improvement Program launched in 2012, helped make the area more resident- and pedestrian-friendly by planting trees, widening sidewalks, installing public seating, and generally making the area more inviting.

Baer said the BID is building a new park at the corner of Spring Street and Avenue of the Americas.

“We turned some areas around the Holland Tunnel [in Freeman Plaza] into little parks,” she said. “We planted or retrofitted 250 trees. Our job was to help make this really feel like a place for people, not a manufacturing district. We have largely succeeded in doing that.”

With the decline of the area’s industrial vibe, the addition of beautification initiatives and the influx of creatives, it made sense for the area to look toward residential. Two major developments are already finished and occupied—Extell Development Company’s 22-story, 122-unit co-op at 70 Charlton Street, and Related Companies’ 12-story, 160-unit rental at 261 Hudson Street.

Now, four more residential developments are on the way. These include Cape Advisors’ 167-unit, 27-story condo at 110 Charlton; a 70-unit, 25-story, CookFox Architects-designed condo from developer Jeff Greene at 100 Vandam Street; a 25-story, 54-unit condo from Agime Group at 570 Broome Street; and a 115-unit condo by a joint venture at 100 Varick Street.

These projects were enabled by the area’s March 2013 rezoning and the creation of the Special Hudson Square District, which allowed for the construction of over 3,200 units of housing (20 percent affordable), as well as funding for open-space facilities and a school, while maintaining the area’s commercial core and encouraging small-footprint retail.

One of Hudson Square’s advantages as a potential residential hub is its access to transportation with the 1, A, C and E subway lines accessible nearby. But the area still has a way to go in being able to provide some of the basic services people expect from a neighborhood.

Not exactly teeming with grocery stores at present, the area will welcome a 19,000-square-foot Trader Joe’s to 233 Spring Street between Varick Street and Avenue of the Americas sometime this year.

“The retail scene has improved dramatically since 2009, when [the BID was established],” Baer said. “We have lots of coffee shops. We have a few really great fine-dining places. We have lots of grab-and-go … We still need some of the residential infrastructure. Trader Joe’s is going to make a big difference, but we don’t have a traditional supermarket. We do have a pharmacy—maybe we could use another. All the residential buildings are going to have small-footprint retail, too, on the bottom.”

“They still need a lot of service-oriented retail to support the residential,” echoed Jonathan Resnick, the president of Jack Resnick & Sons, which owns commercial property throughout the area including 250 Hudson Street, which they converted from a printing trades building to a Class-A office tower in a $40 million renovation in 2008.

Whatever the area may lack, Resnick said he believes the future of Hudson Square is bright.

“We’ve been in the neighborhood since the 1960s and have almost a million feet down there, and we’re bullish on Hudson Square,” he said. “There’s been a voracious appetite for residential development, so it’s just natural this expansion follows where there’s availability. There’s good transit there, so it’s a great location to live and to work. I’m not sure where the nearest grocery store is in Hudson Square, or the dry cleaner. It doesn’t have all the full-service things you need that really make a neighborhood a residential neighborhood, but I think that’ll come.”

For high-end renters and condo buyers, there are other advantages to wading into a fairly new neighborhood. Sean Murphy Turner, an associate broker at Stribling Marketing Associates and the director of sales at 570 Broome Street in Hudson Square, said that new condo buyers will benefit from the area’s natural price advantage—in Hudson Square units are as much as 20 or 25 percent cheaper than they’d find in the best parts of Tribeca.

“Developers are always looking for places where they can build apartments with great air and light. I think that’s really hard to find,” said Turner, noting the open southern exposure of 570 Broome, which expects its first move-ins by the fourth quarter. “We’re 25 stories, so we have amazing views of the Hudson River and open views to the north as well. That’s a pretty amazing opportunity, and yet it’s not at the price point you might find if you were in the middle of Tribeca or the West Village. If you’re talking absolute prime, best blocks in Tribeca, there’s a 25 percent discount.”

“We’re currently averaging $2,115 per square foot. If you look in Tribeca, Soho, and the West Village, they’re all between $2,600 and $3,200 a square foot,” said Elysa Goldman, a vice president of development at Extell, the developer of the property at 70 Charlton.

“People are finding that we’re one of the last enclaves in New York where you can live Downtown and get a price point that’s attractive, and they know that because more things are coming, their investment’s only going to increase,” Goldman said.

One exciting aspect of the area’s burgeoning residential wave is the potential for architectural wonders to add to the city skyline.

“One thing I appreciate is that Related and Extell really respected the architectural context of this area because what makes this area so special is that [its buildings have] good bones,” said Baer, referring to the companies’ respective projects at 261 Hudson and 70 Charlton.

“Hudson Square has these great buildings, the printing buildings,” Baer said. “Most of them were built in the 1920s. They’re Art Deco buildings that have a very clear aesthetic, and it was clear when those buildings were built that that aesthetic was respected. The challenge with a neighborhood that people love so much is to allow it to evolve without having it transform into something else. That hasn’t happened so far.”

Baer said she also sees the area’s more commercial history as an advantage for a growing residential neighborhood and noted that the growth of residential doesn’t mean Hudson Square won’t still be a strong commercial center.

“I think 10 years down the line you’ll see more residential high-rises coming, and more office is going to go up,” she said. “Through the zoning, there’s a lot more square footage of office that can come in. People want to live where they work, for pure convenience. So you’re going to see a lot more office space, and people living in the area where they work.”

Overall, the new residential character of Hudson Square is en route to breaking the industrial perception of the area, helping it be seen as a multidimensional New York City neighborhood.

Update: An earlier version of this story misstated the number of units at 261 Hudson Street.