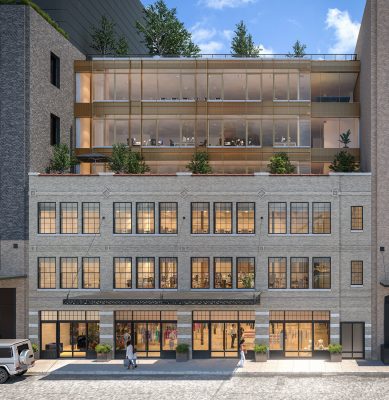 Following a building redesign in 2020, 405 West 13th underwent a series of renovations, in which the landlord invested $20 million into turning the former pork warehouse into a 50,000-square-foot office building. The renovations added three floors and 15,000 square feet of glass commercial space.

Engine No. 1’s lease will take a sizable chunk of that office space, as well as an additional 1,800-square-foot outdoor terrace, The Real Deal reported.

The exact asking rent for Engine No. 1’s lease is unknown, though office rents in the building go for approximately $150 per square foot, as Commercial Observer previously reported. Retail asking rents go even higher, reaching the mid-$300s range.

In opening an office in the Meatpacking District, Engine No. 1 will expand beyond its San Francisco headquarters to further its mission of environmental management. Investor Chris James founded the company back in 2020, and has since run full speed ahead in campaigning for environmental advocacy.

Perhaps best known for its victory over ExxonMobil, Engine No. 1 made major strides towards sustainability in May, when it won the right to install three directors on Exxon’s board.

Spokespeople for CBRE, Newmark and Engine No. 1 did not immediately respond to requests for comment.