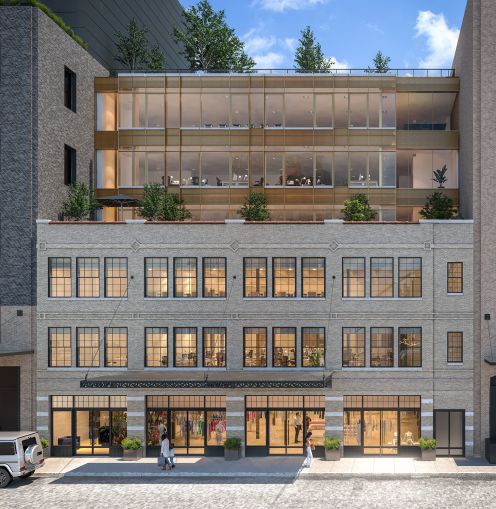 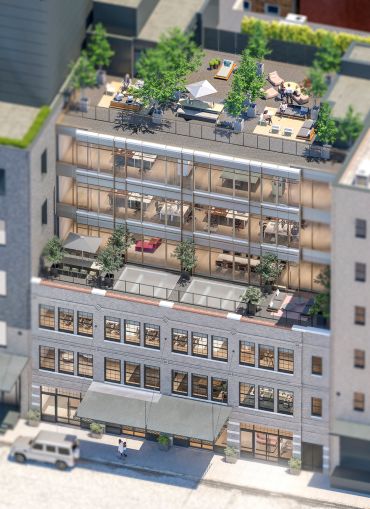 Another view of the proposed expansion of 405 West 13th Street, which will add office space and 4,000 square feet of private roof decks. Rendering: Familiar Control

A look at the interior of the expanded 405 West 13th Street, where office rents will reach up to $150 a square foot. Rendering: Familiar Control

Another image of the fourth floor of 405 West 13th Street, where tenants will have a private terrace. Rendering: Familiar Control
Previous Next

A former pork and poultry storage warehouse at 405 West 13th Street in the Meatpacking District is entering its final form as a boutique office building, courtesy of developer Aurora Capital Associates.

Aurora is sinking $20 million into adding three stories and 15,000 square feet of glass commercial space to the three-story, 32,000-square-foot building. The Arts and Crafts-style structure between Ninth Avenue and Washington Street will be converted to high-end office and retail space with the help of BKSK Architects. Updates to the turn-of-the-century building will include a new lobby, new elevators, a restored marquee, new storefronts, upgraded utilities, a repointed brick facade and new windows that “replicate the historic look and feel” of the building, according to Aurora principal Jared Epstein.

The Landmarks Preservation Commission-approved redevelopment will also add a fourth-floor terrace, a shared roof deck and skylights. Rents will reach up to $150 a square foot for offices and mid-$300s a square foot for retail.

Epstein hopes that a single tenant will take most or all of the property — perhaps a social club, office tenant or fitness facility — but the building could be divided between an office tenant on the upper floors and a retailer on the lower ones.

“We have some of the greatest amenities just by being in the neighborhood,” said Epstein. “Places to go and work out and have breakfast, lunch and dinner.” He added that the building would be particularly attractive to finance and tech tenants, because of the “proximity to c-suite homes — people who live in Chelsea, the West Village, Flatiron, and they’re migrating their companies closer to where they reside.”

The former cold storage warehouse was originally developed by John Jacob Astor IV around 1909 and has hosted numerous meat and poultry suppliers, furniture makers, a date and nut seller, as well as a gay club called Lure in the 90s and early 2000s.

Aurora inked a 99-year ground lease for the West 13th Street building in 2017 in a deal valued at $65 million, Epstein told Commercial Observer. His firm has an outsized presence in the neighborhood, where it has completed a few other developments. It recently finished the Studio Gang-designed Solar Carve, a boutique office building along the High Line, and it redeveloped an old warehouse on Ninth Avenue into a Restoration Hardware a few years ago.