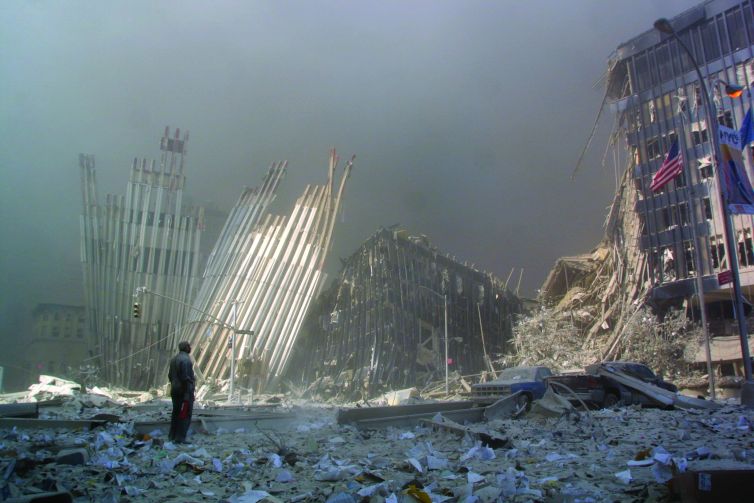 A man standing in the rubble on Sept. 11, 2001. Photo: DOUG KANTER/AFP via Getty Images

A good deal of the grief of 9/11 had to do with the symbolism involved.

The death toll was, of course, unbearable. That can never be diminished. (But in the cold, unfeeling lessons of the last year, America learned just how bad a catastrophic death toll could look.)

Rather, it was smashing one of America’s icons — laying low the skyline of our greatest, most populous city, and watching helplessly as the pyre burned — that heightened the sense of violation.

In those weeks, months and years after the worst had been done, everything became symbolic. Rising to one’s feet and singing “God Bless America” became an almost sacred ritual. Rooting for the New York Yankees to get to the World Series meant one was really pulling for New York as a whole. (Alas, the Yanks lost in the end to the Diamondbacks.) Seeing a firefighter, or a cop, or an EMT worker was an occasion to earnestly say: “Thank you for your service.”

In that older New York, people became symbolic and iconic, too. It is difficult to remember now just how revered then-Mayor Rudy Giuliani was after his show of calm during the shock of that day. When he left office in 2009, George W. Bush’s approval rating would sit at an anemic 34 percent, according to Gallup, but in those days — when Le Monde was saying “We Are All Americans” — his rating would soar to 90 percent. Ten years after his death, one forgets just how profoundly Osama bin Laden’s specter haunted the city and the country, but it was commonly believed he was dusting our mail with anthrax, plotting to blow up our subways, and swapping nuclear secrets with Saddam Hussein.

Larry Silverstein was one of the icons of that moment: He was, of course, the owner of the Twin Towers. And, for real estate professionals, he became a symbol of determination. There were squabbles that followed between Silverstein and the city, the state, the Port Authority and the insurance companies, but this punchy septuagenarian was a symbol of perseverance. The very day that the towers fell, Silverstein was talking about rebuilding. Now, at 90, Silverstein is still at it.

Not all of the World Trade Center complex has been rebuilt, but most of it has. Two World Trade Center, a multimillion-square-foot colossus and the last piece in the WTC puzzle, has come tantalizingly close to being realized year after year. It remains one of the loose ends of the story. But plans are being readied for another attempt.

Immediately after the towers fell, New York’s Samaritans got to work. The rescue and clearing of the disaster site involved equal shares of goodness and expertise. Tom Scarangello was a name that was less known than Silverstein, but with his team at Thornton Tomasetti, they were some of the ones that undertook that hard labor. Real estate professionals tried to help by doing what they did best — they found space for companies suddenly cast into the chasm. Those wracked with emotion searched for spiritual comfort, and they found it a few hundred feet from the disaster site at Trinity Church, which has stood in the neighborhood since the 18th century.

The number 20 is, itself, symbolic: It is a generation. A baby born 20 years ago has most of the privileges of adulthood, save drinking alcohol or renting a car. This last 20-year epoch has proved especially fraught. America would endure plague, economic calamity, and enter two major wars, the first of which ended last month. (Five of the American military victims of last month’s terrorist attack in Kabul airport were 20 years old — infants when the casus belli occurred.)

What does this momentous historical event mean to these young people? For those of us older than 30, it was defining — how our parents related to John F. Kennedy’s assassination, or how our grandparents related to the bombing of Pearl Harbor. What does the younger generation know or think about that day?

We’ve been thinking about all of these questions quite a bit in the run up to this solemn milestone. Much has happened since Sept. 11, 2001. America has found itself humbled by one crisis after another, much of which comes roaring back as we remember what we were like as a nation that, for the first time in decades, suddenly felt vulnerable.

However, the great promise of this country is its sense of reinvention. We’ve never been a nation to brood and sulk. We remember. We learn. We push forward. We’ve done it before, we’ll do it again.