2 World Trade Center Poised to Get Underway With New Architect

The last, big missing piece of the redevelopment of the World Trade Center site has switched architects and is poised to get underway 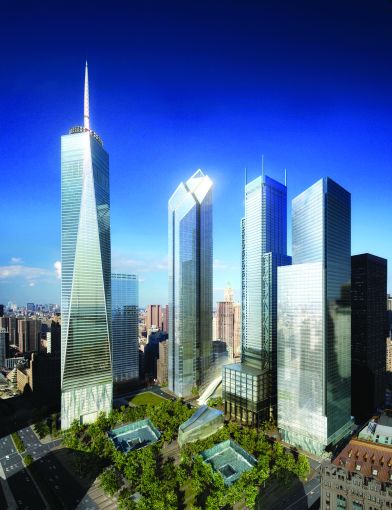 TAKE TWO: There have been a number of attempts to get the last piece of the World Trade Center finished, but Norman Foster of Foster + Partners is taking the reins for the 1,270-foot-tall, 2.8 million-square-foot tower. He’s done one attempt already. Rendering: Silverstein Properties

For the most conspicuous missing piece of the post-9/11 master plan for the 16-acre World Trade Center site: It’s try, try again.

Silverstein Properties, which retains the building rights to 2 World Trade Center, is going back to architect Norman Foster of Foster + Partners as it tries to get what would be the second-tallest skyscraper at the site going.

It’s an effort that almost came together in late 2015, only to fall apart when Rupert Murdoch’s News Corp. and 21st Century Fox pulled out of the project in January 2016. If they had followed through, the tower would have been the new home of The Wall Street Journal, Fox News and the New York Post.

That project lives on as a placeholder on Silverstein’s World Trade Center website: 80 stories; 1,270 feet tall; 2.8 million rentable square feet; designed by Bjarke Ingels, the Danish architect who has taken the world by storm with his rethinking of building concepts that had been set in stone.

In New York, Ingels is probably best known for VIA 57, a residential tower built by the Durst Organization, which looks more like a sailing ship than a typical, rectangular apartment house; and The Spiral, a Tishman Speyer office tower, which will feature a spiral of open terraces on every floor.

Now, the designing of 2 World Trade has been returned to Norman Foster, the British architect best known for the “Gherkin”, an office tower in London so nicknamed due to its vegetable shape; 425 Park Avenue in New York, the first new construction on Park’s finance corridor in about 40 years; the Hearst headquarters on Eighth Avenue, a series of interlocking triangles rising out of a castle-like base built in the 1920s; and the ring-shaped Apple headquarters in Cupertino, Calif.

“We are proud to have been part of the World Trade Center redevelopment since 2005, when we were selected to design 2 World Trade Center,” said David Summerfield, a senior executive partner at Foster + Partners and lead architect for 2 WTC. “We can confirm that we are working with Larry Silverstein and the Silverstein organization on a new design for the building.”

The architect originally proposed a tower that would have four distinct sections, each rising to a slanted top, a design that would have appeared as four diamonds slanted in the direction of the memorial to the two original Twin Towers, now replaced by two square-shaped pools at the approximate spots where those towers stood.

Silverstein, which leased the World Trade Center offices from the owner, the Port Authority of New York and New Jersey, a mere six weeks before the terrorist attack, is also in search of an occupant that would be key to getting 2 World Trade built. “The company is seeking an anchor tenant so it can get financing to have it built,” said Silverstein spokesperson Dara McQuillan.

Unlike the other three towers on the site ​​— One, 3 and 4 World Trade Center — 2 will not rely on any government assistance whatsoever to get it built, said McQuillan. The tower is utterly reliant on business conditions coming together, to make it both buildable and financeable.

The master plan — laid out by architect Daniel Libeskind and chosen in 2003 in a competition by the Lower Manhattan Development Corp. — envisioned a crescent of four office towers, starting with One World Trade (the tallest) at Vesey and West streets, and working around to 4 World Trade (the shortest of the quartet) at Church and Liberty streets.

In the case of 3 World Trade, designed by Italian-British architect Richard Rogers, the city, state and Port Authority backstopped the construction loan that paid for most of the tower. McQuillan said Silverstein never utilized the guarantees. It was the most recently built of the skyscrapers, completed in 2018. It has 80 stories, is 1,079 feet high, and has 2.8 million rentable square feet.

At one time, the 2 WTC site — at the southwest corner of Church and Vesey streets — was considered the most lucrative location for a new skyscraper, because it sits atop subway stations and it’s physically closer to Wall Street than the site of One World Trade. In fact, when stakeholders were still arguing about One World Trade Center, which then-Gov. George Pataki called the “Freedom Tower”, some thought of moving it to the Church and Vesey site.

The Port Authority took back One World Trade, the tallest building in the Western Hemisphere at 1,776 feet, and eventually the Durst Organization bought an equity interest in the tower and now operates it for the agency. Silverstein remains the operator and builder of 2, 3, and 4 WTC, as well as 7 World Trade Center, which is just north of the 16 acres.

Both 7 and 4 World Trade are fully occupied, and the occupancy rate at 3 World Trade is 80 percent, according to McQuillan. “It would have been at 100 percent if it weren’t for the pandemic,” he said.

The 2 World Trade site today is taken up by a corrugated steel shed festooned with artwork. McQuillan said the shed contains utilities that serve the Oculus PATH terminal and shopping mall just south of the site. Underneath the site, he said the foundation for the skyscraper is already complete, which would shave one to two years off the time it typically takes for a building that big.

Jeremy Moss, Silverstein’s executive vice president and director of leasing, expressed certainty that, within the next six to 12 months, “we will have commitments to the building” that will be enough to green-light construction. That’s given the interest the project has already generated from the business community. While Moss wouldn’t name names, he said companies from both the technology and finance industries have expressed enthusiasm in 2 World Trade.

“It’s the natural next step, and the final step, in the development of the World Trade Center,” Moss said. “The demand for high-quality office space is probably greater than it’s ever been. Even during, and coming out of, the pandemic, there is a clear flight to quality, as companies place more value on the quality of their space than the cost of their space. It’s worth every penny to make sure they are creating the ideal environment.”