Filling the Memory Hole of 9/11 for Generation Z 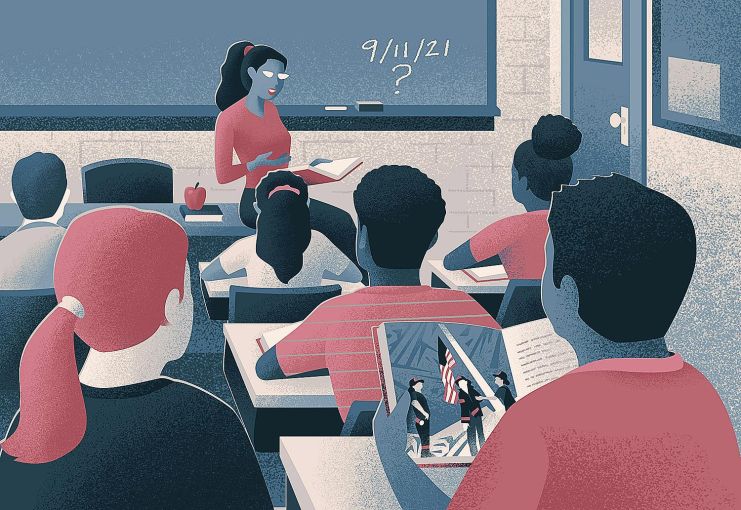 An illustration of a classroom scene as students learn about 9/11. Illustration: Kevin Fales

Her memory of the terrorist attacks is foggy. Sam was nearly out the door of her home in Brooklyn to go to her day care when news of the attacks flashed on her television screen. Images of two planes crashing into the Twin Towers flickered on as the structures began to crumble, then off again, because Sam’s mother didn’t want her to see too much violence at such a young age. Her day care was canceled for the day. And, as young as she was, it was an indelible memory.

Sam’s cousins, who are more than five years younger than her, do not have the same memory. They weren’t even born. For them, the attacks were just another lesson learned in history class.

“That image across the TV, and knowing this is happening miles from you, is something you’ll never, ever forget,” Sam, now 24, who is currently a real estate MBA student at the University of Miami, told Commercial Observer. “That’s just part of history to them, it’s not something they’ve experienced. I can never see myself in that part of Manhattan and not always think about it, especially if I’m around the memorial. I think about that day, while they’ll only just think about what they learned in school. [It’s] the real versus textbook.”

For 20 years, the legacy of the Sept. 11 terrorist attacks has defined much of New York City. But the vow to “never forget” takes on a different meaning for the youngest generation who, for the most part, don’t remember 9/11 in the first place.

Sam is one of the older members of Generation Z — those born after 1996 — having just turned 24 this past June. While she holds a murky memory of the attacks, the vast majority of her generation has instead been taught the legacy of Sept. 11 through annual moments of silence, old news clips and photos, and the museums and monuments that pepper the city.

Generation Z is unlikely to remember a time before metal detectors were scattered around American airports, said Aaliyah St. Louis, 22, a program manager at Project Destined — which mentors and trains diverse students in real estate — who is also pursuing her MBA at the University of Miami. St. Louis was only two years old on Sept. 11, 2001, and learned about the attacks through documentaries shown in her elementary school.

“When I reflect on 9/11’s cultural impact, I initially think about increased security measures and surveillance,” St. Louis said. “I think about [Transportation Security Administration] airport lines, random searches, and increased police presence. I also think about a sense of cohesion and unity within the country, in order to help the world deal with this tragedy. Additionally, I think about negative impacts, such as discrimination against people with minority backgrounds.”

The national response to the attacks has informed the cultural context that surrounds Sam and St. Louis — one that came with a surge in anti-Islamic hate crimes; a $2 trillion war in Iraq resulting in the deaths of more than 400,000 people; and a 20-year, $2.3 trillion war in Afghanistan that is now just ending, with the deaths of more than 40,000 Afghan civilians and more than 6,200 Americans there during that time.

Such historical context has made Gen Z profoundly anxious about terror and extremism. About 82 percent of Gen Z Americans ranked extremism and the rise of global terrorism as their greatest fear for the future, according to the Varkey Foundation, an education charity that surveyed 20,000 young adults worldwide on their political and social views.

From the climate of fear following the Sept. 11 attacks to all-too-common and nationally publicized school shootings since the 1999 attack at Columbine High School in Colorado, pessimism seems to be a natural response. Twice as many young Americans think that the world is becoming a worse place than those who think it is becoming better, the Varkey Foundation found.

And the ongoing coronavirus pandemic of the past year and a half has not given young Americans more to be optimistic about. Gen Z is reckoning not only with the decimation of a strong economy that it was supposed to inherit, but also an uncertain future.

According to a Pew Research Center survey, the oldest Gen Zers have been hit hard by the coronavirus, with half of those respondents reporting that they, or someone in their household, had lost a job or taken a pandemic-caused pay cut — 40 percent of millennials, 36 percent of Generation X, and 25 percent of baby boomers who responded to the survey also said the same.

For older adults, like millennials — who are now in their mid-30s to early 40s — watching the Twin Towers fall was seen as a generation-defining moment, according to the Center for Generational Kinetics, a consultancy firm. But the COVID pandemic might be what ends up defining Gen Z.

The feeling of uncertainty that Sam felt after the 9/11 attacks came back to her when New York City first shut down early in the pandemic, she said.

“I think it’s the same unsettling [feeling of], what is the future going to look like?” Sam said.

“When the pandemic hit, I remember [that] everyone, those first couple of days, thought we’d be back really soon, but then it just kept going … And it’s the same scary thought of 9/11, where, if they were so easily able to hijack and crash into our buildings, Manhattan has a thousand more of those buildings. Is that going to continue? I remember thinking [that] my mother worked in Manhattan [and], oh my god, my mother works in these tall buildings.”

Of course, unlike the aftermath of the Sept. 11 terrorist attacks, the U.S. hasn’t leapt into foreign wars as a response to the pandemic.

“I think the main difference is, [during] the pandemic, it’s almost like we have no one to blame, versus 9/11, where there was clearly someone to point fingers to — or, at least, we attempted to,” Sam said. “And I think that’s the main difference. We ended up having a war in Afghanistan because of that, versus now, [where] we’re just looking at the consequences and trying to figure out a way back to pre-COVID.”

Gen Z’s views on the 9/11 attacks, as a whole, remain largely undocumented. While millennials have been endlessly polled about their fading military support in the years following the attacks and had their experiences living through 9/11 documented on film, academics have not yet measured the thoughts of Gen Z, whose members range from middle schoolers to recent college graduates.

So, how is New York City educating its youngest workers, in the midst of a global pandemic, about the complicated legacy of the 9/11 attacks?

Alessia Lawson, a former marketing intern at Silverstein Properties and a 21-year-old senior studying real estate development at the University of Southern California, was just 1 year old when the Sept. 11 attacks happened. Her first memories of learning about 9/11 come from the annual moment of silence she would observe as a student in elementary school in California, but her first visit to the 80th floor helped her take in the attacks, Lawson said.

“The elevator doors open and … the light just shines through. You have the most beautiful view of the entire city, and these images are just lit up by the sun and the light that’s up there … You have construction workers’ hard hats, you have all of the old newspaper stories — that was one thing that really stuck with me,” she said. “I was alive, but I wasn’t picking up the newspaper [then], so reading all of those was great understanding for me.”

The Alliance for Downtown New York has also worked to memorialize the attacks after working to rebuild Manhattan’s downtown following Sept. 11. To coincide with the 20-year anniversary of 9/11, beginning Sept. 7, the nonprofit started the “Art on the Ave” initiative to display paintings and artworks for sale outside of closed retail destinations along Broadway in Lower Manhattan to demonstrate the “resiliency” of New York City.

“An anniversary like this does remind us to remember,” Jessica Lappin, president of the Alliance for Downtown New York and a former New York City Council member, told Commercial Observer. “It reminds us to learn. For those who weren’t yet alive, or were so young they don’t have that firsthand experience, I hope that this anniversary gives them reason to educate themselves and to learn more about that day.”

But one thing that Lappin didn’t want to get lost in the history of the attacks was New York’s recovery, and how far the city has come in rebuilding lower Manhattan.

“While we’re still facing some dark days,” she said, “we have a lot to celebrate and I think that’s important to note.”