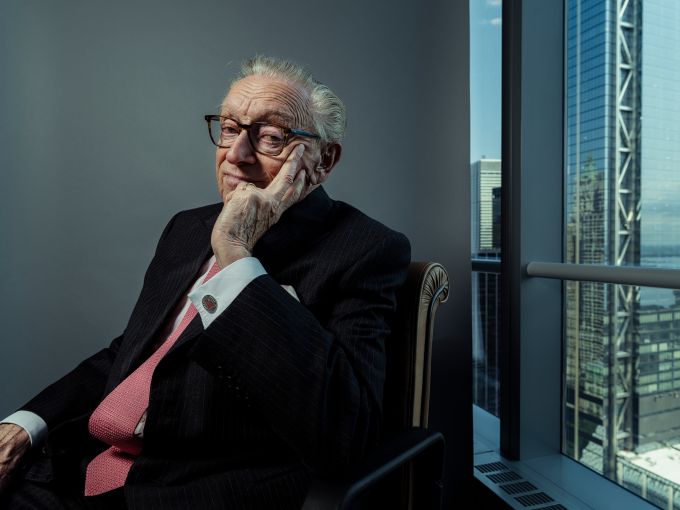 As far as real estate was concerned, there was one central figure in the drama surrounding 9/11: Larry Silverstein.

He was already a legendary figure in the business, but he had taken possession of the Twin Towers only six weeks earlier, which added a whole backstory. He was warm and avuncular, but he also had a New Yorker’s grit and determination.

One can see it 20 years later. Any lingering uncertainty about whether there will be a return to normalcy post-pandemic is put to rest by the distinguished 90-year-old developer.

“I have watched New Yorkers navigate and grow stronger through many major crises, including World War II, the fiscal crisis of the 1970s, the blackout of 1977, the early 1990s recession, the dot-com bust, the September 11 attacks, the Great Recession following the collapse of Lehman Brothers and Superstorm Sandy,” Silverstein said. “From these experiences, I’ve learned that you should never bet against America, particularly New York. Never. This town always comes back stronger than ever.”

That is the same kind of assurance and optimism he routinely shares with people, giving many confidence about the future of New York City, including Leslie Koch, president of the Ronald O. Perelman Performing Arts Center at the World Trade Center, which topped out at the site in June.

“When Larry says, ‘New York will come back’, I believe him,” she said. “It is actually deeply comforting to think about Larry saying, ‘You know, trust me, it’s gonna come back’, since he’s seen it happen over many decades, including the years since 9/11.”

As the chairman of Silverstein Properties, the firm he co-founded with his father in 1957, Larry Silverstein has been an integral part of the 20-year rebuilding of the complex, 16-acre World Trade Center site in Lower Manhattan. His involvement dates back to the 1987 completion of the first 7 World Trade Center, followed by July 2001, when Silverstein signed a $3.25 billion, 99-year ground lease for the World Trade Center with the Port Authority of New York and New Jersey.

For six weeks, Silverstein “owned” the Twin Towers. In that short time, he brought on board David Childs, who is now chairman emeritus of architectural firm Skidmore, Owings & Merrill (SOM).

“I was hired by him just three weeks before [the terrorist attacks] to redo the lobbies and make those outdoor spaces around the Twin Towers more pleasant, and so forth,” Childs said. “And, I was just about to get started on it when 9/11 happened.”

Once the disaster hit, Silverstein — whose firm has developed, owned and managed more than 40 million square feet of office, residential, hotel, retail and mixed-use properties — nimbly pivoted, with an unwavering commitment to rebuild the site and make it a mixed-use World Trade Center.

“I watched him — he just couldn’t have been more engaged and picked up this new challenge, twisted entirely from what he was intending to do with the two buildings, and took on the responsibility [himself] to get it rebuilt,” said Childs, who designed 7 World Trade Center, New York City’s first LEED gold-certified office building, and One World Trade Center.

“It became obvious to me very early on that we needed to rebuild, and as quickly as possible, because the World Trade Center had been the locomotive for business activity in Downtown New York,” Silverstein said.

Tower Seven was the optimal building to start with, primarily for practical reasons. Con Edison had a destroyed substation located at its base that needed to be rebuilt immediately to power Lower Manhattan. Also, there was no loss of life at the building, since it had been safely evacuated before collapsing, and it was separate and apart from the towers, so Silverstein had complete control of it.

Gary LaBarbera, president of the Building and Construction Trades Council of Greater New York — and whose organization played a key role in the cleanup and recovery efforts at the World Trade Center site in the wake of 9/11 — commended Silverstein’s decision.

“Shortly after the conclusion of the cleanup and the recovery, Tower Seven was going up,” LaBarbera said. “He was building. That was a huge statement. [He was saying,] ‘We’re not going to sit here and wait 20 years to start to build. We’re building now.’”

But the “20-year” figure is a significant one. Silverstein has spent the last two decades earnestly at work rebuilding the site, even moving to his nearby Four Seasons Hotel New York Downtown after it opened in 2016 to live downtown and to more closely oversee the WTC project.

“Only Larry has stood on that site, lived on that site for the last 20 years,” said Mary Ann Tighe, CEO of CBRE’s New York tri-state region, whose team leased up the majority of the current World Trade Center site. He is the “icon of the rebuilding,” she added.

Tower Seven, a 52-story office building, opened on May 23, 2006, marking the gateway to the new World Trade Center, a site bounded by Vesey Street to the north, the West Side Highway to the west, Liberty Street to the south and Church Street to the east.

“That really was the lightning rod for bringing back Lower Manhattan and changing the entire paradigm down there,” LaBarbera noted.

Building Trades Employers’ Association President Louis Coletti, whose organization also assisted in the 9/11 recovery and cleanup, concurred: “Larry stuck to his guns, thankfully, and showed that it wasn’t just about him and Silverstein Properties. He showed it was about rebuilding New York City and showing that New York was resilient. The easy thing would have been to walk away.”

The rebuilding of the site has contributed to downtown’s transformation into a true work-life-play community.

“It became an iconic destination in a way that the old Lower Manhattan, before 9/11 — which was a less desirable and mostly business district that rolled up the sidewalk at night — wasn’t,” said John “Janno” Lieber, acting chair and CEO at the Metropolitan Transportation Authority, who was the World Trade Center project director for Silverstein Properties from 2003 until 2017.

Jessica Lappin, president of the nonprofit Alliance for Downtown New York, noted how important the rebuilding of the World Trade Center site has been for Lower Manhattan, “both psychologically and physically.”

“It’s shown that we will not be defeated. It’s reconnected and grown the downtown community, and every day it helps to revitalize interest in the neighborhood as a whole,” she said.

It was also probably inevitable that it would become controversial. While many people involved in the rebuilding efforts noted that most large, multi-faceted development projects face opposition, Silverstein dealt with more than his fair share of roadblocks.

These included various design element requests from victims’ families; a fight with the Port Authority over control of the project; competition for the tax-exempt Liberty Bonds; politicians’ disparate visions for the site; a number of insurance battles, including one about whether 9/11 was one attack or two (Silverstein insisted it was two and won); challenges attracting tenants; and anti-Semitic conspiracy theorists.

“The site itself is quite rightly fraught with emotion,” CBRE’s Tighe said. “Everybody has a stake in that site. And then, there’s the idea that, how could a single individual have that much control over something that is part of our common history, part of our collective trauma? Plus, there’s the fact that in New York City, everybody’s got an opinion on everything and has no problem finding an outlet to express it.”

Daniel Libeskind, the architect who designed the master site for the rebuilding of the World Trade Center site, noted that “there are always going to be the typical cynics and skeptics that are hiding in the corners. There is anti-Semitism, cronyism and politics. There is jealousy. That doesn’t stop anyone who has a big idea in their head. Larry had it.”

Silverstein became a “useful data point” for anti-Semites looking to blame Jews for the 9/11 attacks, according to Aryeh Tuchman, senior associate director for the Anti-Defamation League’s Center on Extremism, one of the world’s foremost authorities on extremism, terrorism and hate.

Thanks to his optimism and singleness of focus, Silverstein was able to endure for so many years, according to a number of people with whom Commercial Observer spoke. Silverstein has said that he has a thick skin, and Libeskind commented that Silverstein has sitzfleisch, a Yiddish word meaning “perseverance.”

Kenneth A. Lewis, a partner in SOM’s New York office, was the project manager of the World Trade Center redevelopment. While his role has wound down at the site, Lewis recalls meetings with Silverstein and his team as well as stakeholders. Silverstein would sit at the head of the table, with a big clock in front of him, so he could ensure meetings were completed in their scheduled time frames.

And if a company was holding up plans, Silverstein would pick up the phone impromptu during a meeting, and call the head of that firm and ask them, “‘What’s going on? Why are you delaying the project?’” Lewis said.

It is that “stick-to-it”-iveness that has helped Silverstein prevail.

“No matter what was happening, he had this sense of perseverance and a vision that he wouldn’t be compromised,” said Tyrone Childress, a partner in the insurance recovery practice at law firm Jones Day, who was the lead counsel in representing Silverstein and World Trade Center Properties in pursuing liability insurance claims relating to losses from 9/11.

“As you get into this legal labyrinth of issues,” Childress noted, “he was always focused on the broader strategy of: How is this getting us to our ultimate goal and ultimate vision here?”

Today, at age 90, with an office tower at 2 World Trade Center and a residential rental building at 5 World Trade Center left to develop (the latter with Brookfield Properties and two other developers), Silverstein will be about 95 years old when his masterwork is finally complete.

“At the end of the day, these buildings will stand for centuries,” said Lappin of Alliance for Downtown New York. “People will come and admire them.”