Museum of Broadway Snags 26K SF in Midtown, With Plans to Open Next Summer 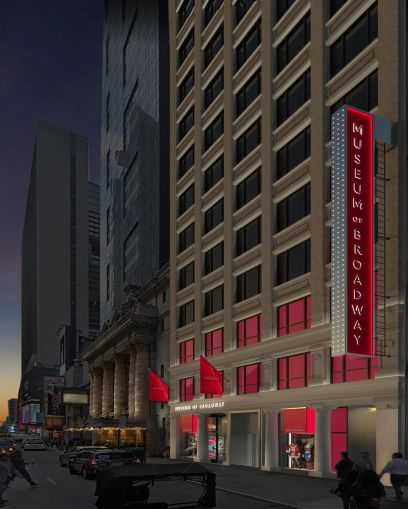 There’s no business like show business (except for real estate, of course).

The Museum of Broadway snatched up 26,000 square feet in Times Square to open the first-ever permanent museum dedicated to the sing-song world of Broadway.

The museum also announced it would open at 145 West 45th Street, next door to the Lyceum Theater, next summer. Asking rent was $115 per square foot, according to a representative for the landlord.

“Naturally, [the museum] selected the space adjacent to the oldest operating theater on Broadway,” LSL Advisors’ Daniel Lolai, who represented the landlord, said in a statement. “This transaction solidifies the eventual return of tourism, theater and culture to New York City and the best is yet to come as we escape the pandemic.”

The deal, signed last month, comes after the pandemic delayed the museum’s opening by a year. It puts the museum on the cellar, part of the ground floor and all of the second and third floors of the 99,024-square-foot, 12-story property between Avenue of the Americans and Seventh Avenue, according to a representative for the tenant. And tickets are expected to go on sale next year, The New York Times reported.

The pandemic delays didn’t just halt the museum’s opening, it stopped Broadway in its tracks. Broadway went dark on March 12, 2020, due to emergency restrictions on in-person gatherings by soon-to-be-former Gov. Andrew Cuomo to curb the spread of the coronavirus. Performances of “Hamilton,” “The Lion King” and “Wicked” are set to resume on Sept. 14, even as concerns over the delta variant grow.

The museum, founded by producer and Tony Award nominee Julie Boardman and marketing company founder Diane Nicoletti, will be an interactive experience that describes Broadway’s migration from the Financial District to Times Square, show a timeline of the birth to modern shows with installations from Broadway designers and artists and deconstruct how a Broadway show is produced, according to NYT.

Cushman & Wakefield’s Amy Zhen and JLL’s Matthew Schuss represented The Museum of Broadway in the deal. LSL Advisors’ Lolai handled it for the landlord, Fatollah Hematian’s Effy Hematian Realty. Zhen did not respond to a request for comment.

The museum will join tenants including WeWork, which signed a 10-year lease for the top five floors in 2019, taking 47,000 square feet of the property when it was owned by Aini Assets and Isaac Chetrit’s AB & Sons, Commercial Observer reported. The two companies sold the building to Hematian’s Effy Hematian Realty in 2019, according to property records. Hematian is the founder of the jewelry brand Effy Jewelry.