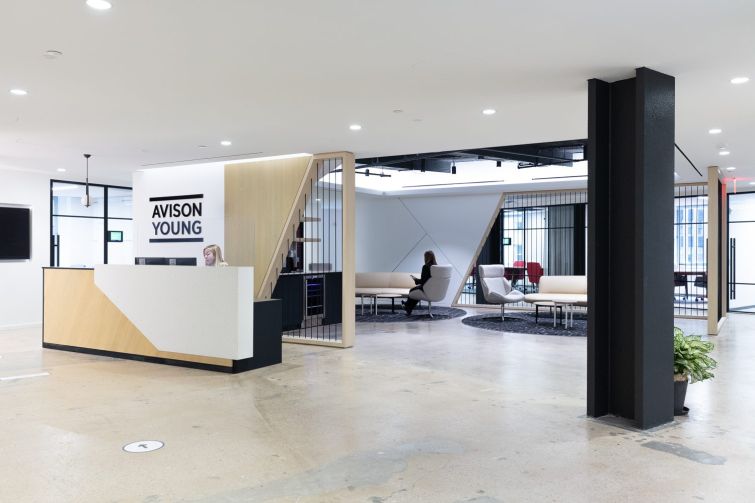 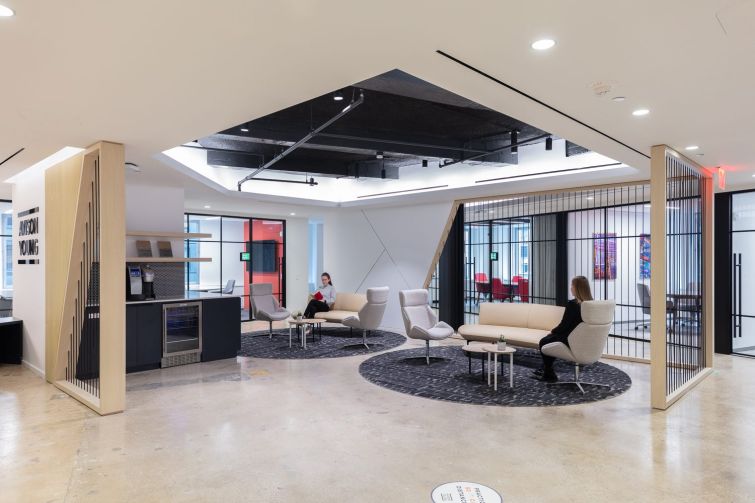 The space has various seating areas, including one behind the reception desk. Image: Avison Young 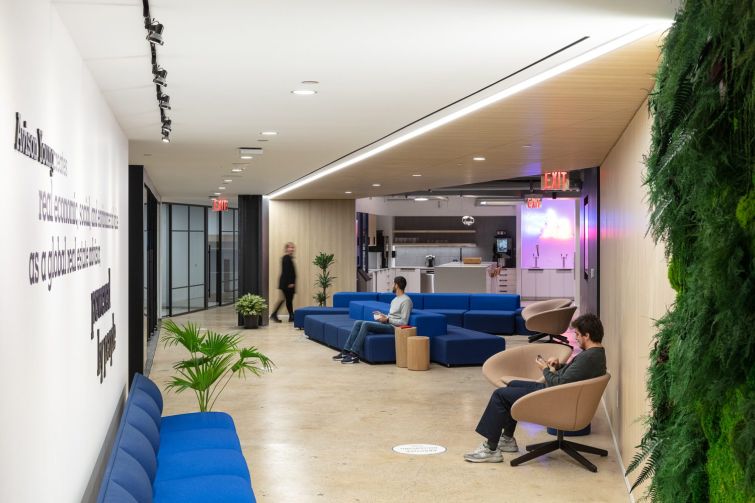 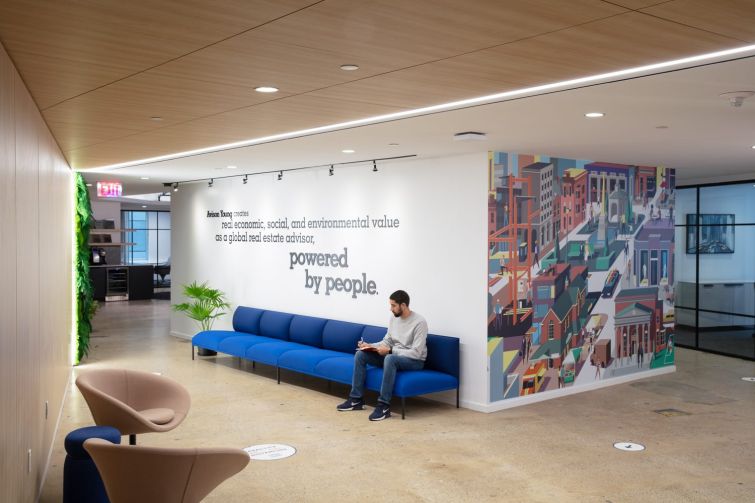 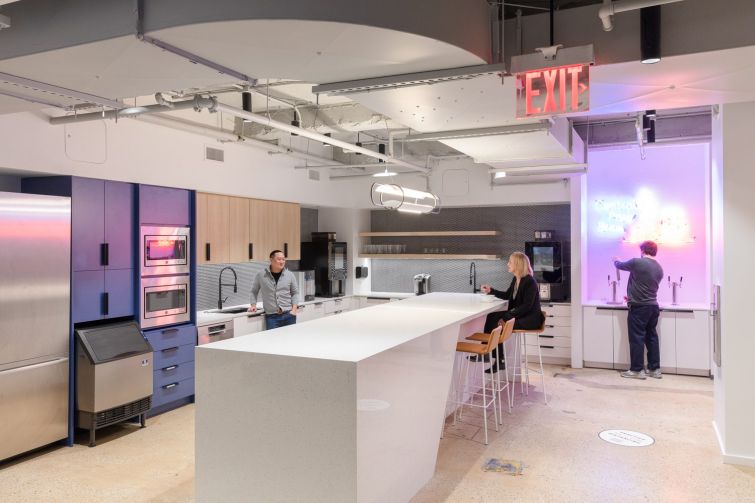 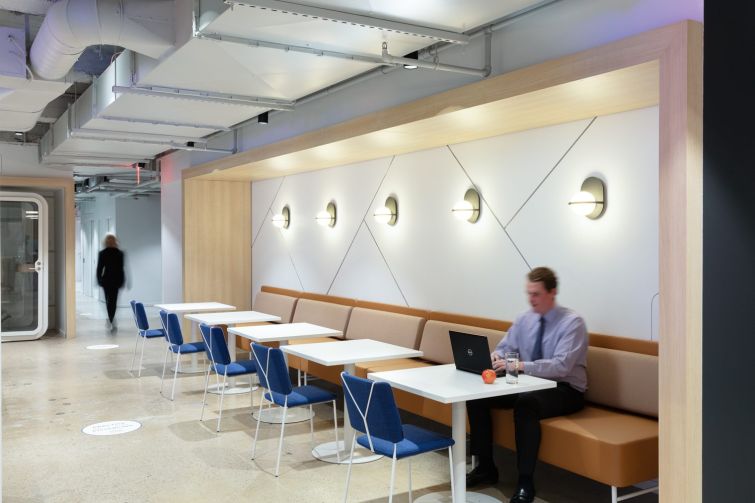 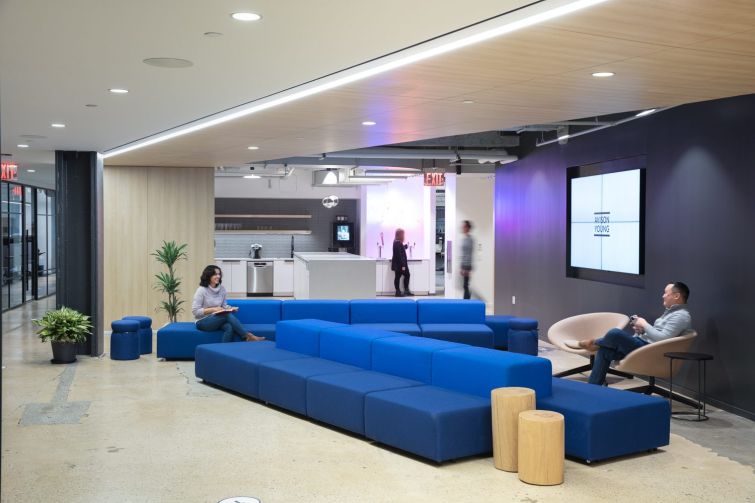 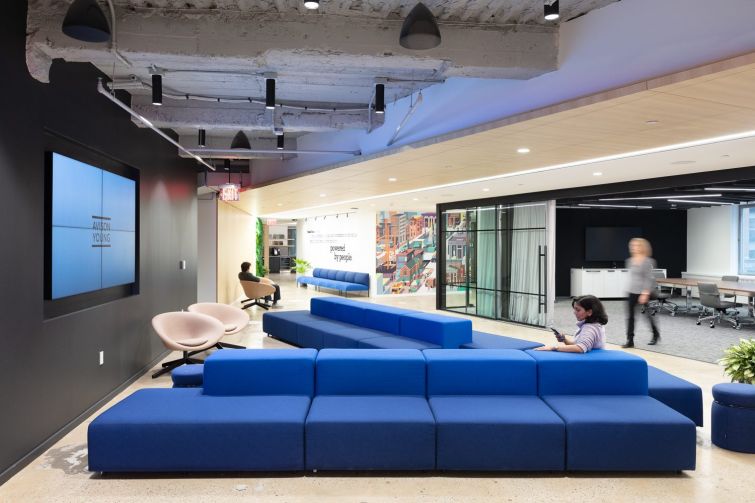 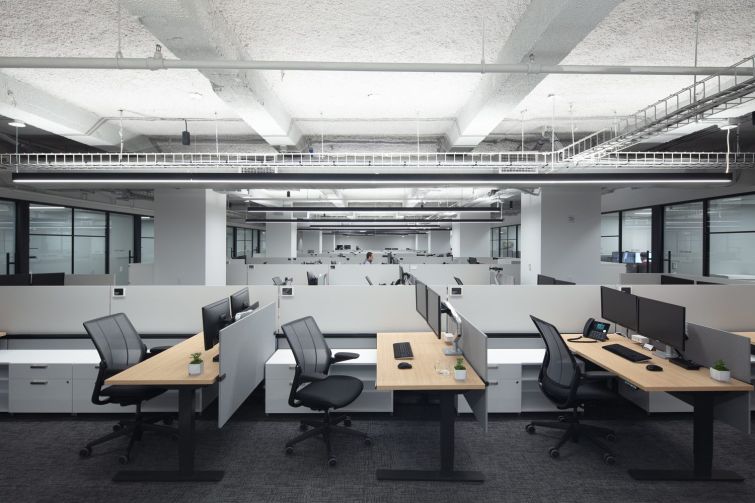 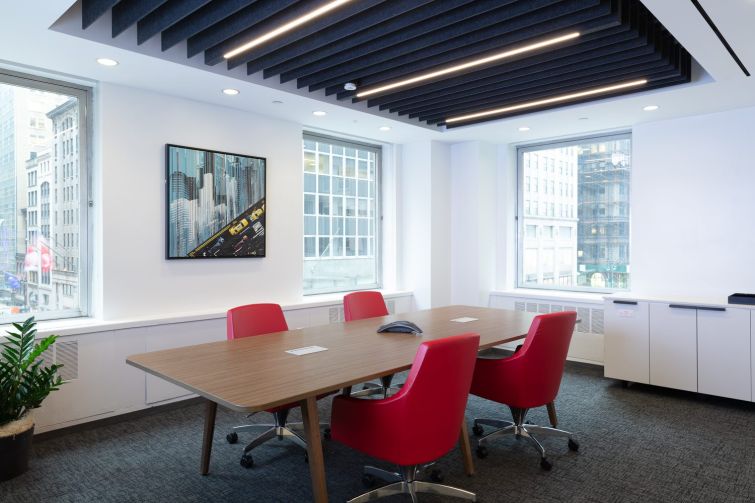 When Avison Young decided to move its office to RXR Realty’s 530 Fifth Avenue two years ago, the brokerage, of course, had no idea that it would end up building out its new location during the height of a pandemic.

Still, construction on the 44,400-square-foot space began in February 2020 and wrapped in October, only two months behind schedule. Kirsten Beck, the principal in charge of Avison Young’s New York office, said that she knew the company’s orders for furniture and fixtures would be delayed once COVID started sweeping across the city.

“I had to make a special call to the [chief financial officer] of Avison Young to request that they release the funds for the deposit for the furniture,” Beck explained. “I felt strongly that if things were shut down and we weren’t in line for production that, when things reopened, we would be at the back of the line.”

Beck was right, and the furniture was only delayed by a month or two, instead of several.

She explained that the design of the space — which has exposed concrete floors; exposed gray ceilings; a large, open lounge with blue couches; a variety of seating areas and small conference rooms — is meant to show clients what their offices could look like post-renovation.

“Often, we’re showing clients space that was done 15 or 20 years ago, and they can’t visualize what [a finished office] looks like,” she said. “Now, we can bring them to our space and show them what an exposed concrete slab or exposed ceiling looks like in an older building.”

Avison Young came from a more dated office at 1166 Avenue of the Americas, which it had occupied since 2012.

“We came out of space where we didn’t have particularly high ceilings and that was something our employees wanted,” Beck noted. “We also wanted to create an environment for our staff and employees that’s comfortable and efficient and effective. In our prior space, we did not have a lot of meeting and quiet spaces, so we included a lot of conference rooms of various sizes and phone booths.”

The soft seating areas include a lounge with cream-colored couches and a coffee bar behind the reception desk, the series of long blue couches situated by an open kitchen, and a leather bench seat with white tables in the main workspace. The lounge and kitchen face a large conference room with glass doors that can be retracted to turn the entire area into an all-hands meeting space.

“The pantry was kind of the focal point of the entire space, dividing the public spaces from the private spaces,” said Khyati Shah, an architect at Vocon, who oversaw the design of Avison Young’s offices. Her team came up with the idea of running wooden ceiling paneling along the wall and ceiling from the reception area to the kitchen, as a way to visually connect those spaces and to help dampen sound.

“We didn’t want to do a lot of open ceiling because of the exposed concrete floor,” Shah explained. “If you go into the workstation area, it’s all open ceiling.”

The wood paneling also features a long, inset LED light that had to be custom-designed. It was yet another item that COVID delayed.

During the design and construction process, Avison Young also changed their branding, which forced Vocon to redesign the conference rooms and seating areas. Fortunately, Vocon had created a 3D model of the space that Avison Young executives could explore with goggles, and it was easy for them to alter the model and show how the design would shift.

“The walls were different colors, different shades of blues and red,” said Shah. “The chairs were different colors. But, then, once we had to actually do the project, we had to refresh the colors — polished concrete, a lot of black and white, wood, and then the reds, and blue chairs. We kept the polished concrete, because we liked the contrast. And we changed the wall colorings and finishes to a gray color. The blue couches went with the warm wood paneling, too.”