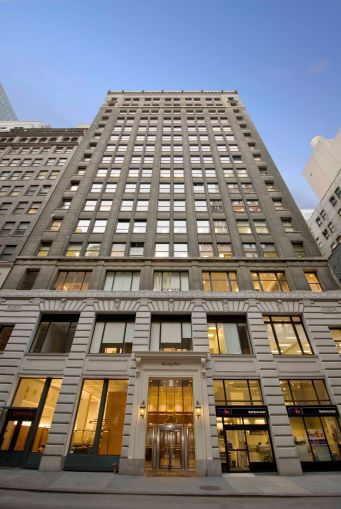 APF teamed up with brokerage Avison Young to open up 50,000 square feet of move-in ready office space at three Midtown towers for small tenants looking for short-term space during the pandemic, according to Avison Young.

“It’s really a function of curating opportunities that are in line with what businesses need in order to come back to New York City,” Hauf, a senior director at Avison Young based in New York City, told CO. “[We] want to partner with [tenants] to make sure that they have opportunities in the marketplace in which they don’t feel like they are taking huge risks.”

The space in the three nearby buildings come outfitted with furniture, and share a conference center at 25 West 45th and a bike storage area for bipedal commuters. Hauf said the building has received “a lot of” interest from technology, financial services and fashion companies, among others.

“The goal of this initiative is to create a direct relationship with tenants creating a sizable future as well,” Hauf said. “Because of that direct relationship, we can accommodate expansions or downsize within our portfolio buildings.”

Even with the recent surge in coronavirus cases, Hauf said people are still confident in New York City leasing and that he expected demand for flexible leasing to increase.

“[It’s been] a very abnormal summer from the standpoint of leasing activity and leases getting done, especially towards the tail end, where August is typically a very quiet month, and we’ve seen a lot of proposals [and] tours,” Hauf said. “If that’s a sign of what’s to come, because people are getting smarter and offering more flexible solutions, we think that demand will continue.”

The pandemic caused a surge in demand for flex office space, with WeWork nabbing a $10 million contract on Thursday from the federal government to provide flex space to government agencies, and landlords are getting in the market. SL Green Realty Corp. launched its own flexible office space at One Vanderbilt in May, while Isaac Chetrit turned over his entire 315 West 35th Street building to his coworking brand, Workville.

Tishman Speyer was one of the earliest landlords jumping into the coworking market, launching its Studio brand  in 2018, which it has continued to roll out in its portfolio during the pandemic. In May, Tishman turned over a former WeWork space at 175 Varick Street for Studio.