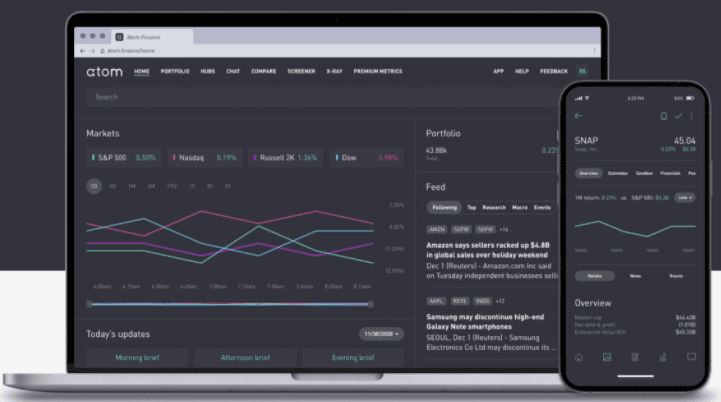 Add Atom Finance to the growing list of tech companies moving to Miami.

The fintech startup will open an office in the Magic City after raising $28 million in a funding round led by SoftBank, the companies announced.

Founder and CEO Eric Shoykhet lives in Miami and plans to have as many as 20 employees there, the Miami Herald reported.

The Wall Street Journal first reported about Atom’s funding and Miami office plans. It’s unclear in which building the company will set up shop. A spokesperson for Atom did not immediately respond to comment.

Atom’s software provides financial information to everyday consumers, leveraging the pandemic-fueled boom in retail investing over the last year. Billing itself as a competitor to Bloomberg and Yahoo Finance, Atom’s software is directed at the crop of Robinhood and Reddit investors who play an increasingly active role in the markets.

The announcement comes as Miami tries to rebrand itself as a tech hub. Persuaded by the lobbying of Miami Mayor Francis Suarez, Silicon Valley heavyweights Founders Fund and Atomic signed leases at Related Group’s Wynwood Annex in March. Earlier this month, the city hosted the Bitcoin 2021 conference, one of the largest in-person gatherings since the pandemic hit, also in Wynwood. And Microsoft is negotiating at 830 Brickell, CO reported earlier this year.

Atom “understands the value and scale that come with cultural and economic diversity,” said Mayor Suarez in a prepared statement. “There isn’t a city in this country better positioned for that than Miami.”

SoftBank is also a major player in Miami’s tech makeover. In January, the Japanese conglomerate said it would invest $100 million in Miami-based startups. The telecom giant, itself, is looking for a new Miami office, one that’s reportedly as large as 100,000 square feet.