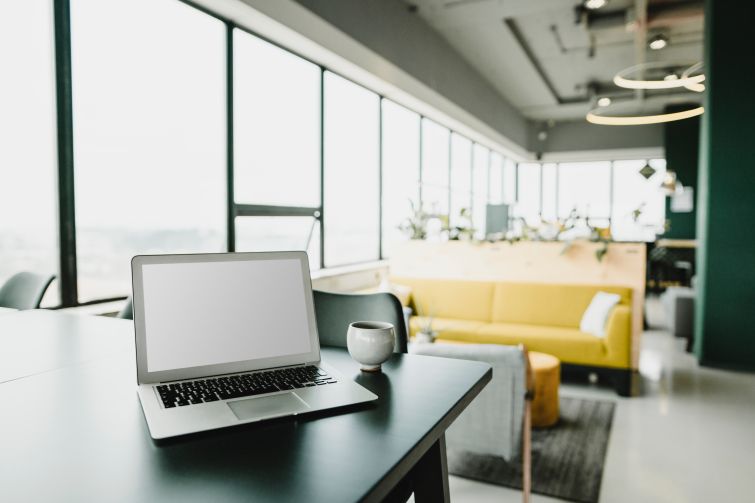 “I’ve been talking to a lot of landlords and helping them understand that now they have an abandoned space that is fully built out,” Michael Thom, owner of New York City-based IT firm ThomDigital Group, said. Photo: Getty Images

The pandemic had just started, but L.D. Salmanson, CEO and co-founder of real estate data firm Cherre, could already see the writing on the wall.

His company was renting around 15,000 square feet at 575 Eighth Avenue from flexible workspace operator Knotel, but Salmanson was concerned that Knotel wouldn’t make it through the COVID-19 crisis.

“We saw them running out of money, and we didn’t have a lot of confidence in their CEO,” he said, referring to then-Knotel’s chief Amol Sarva.

Salmanson and Cherre decided to start working on a backup plan to make sure they wouldn’t find themselves office-less in the event that Knotel went kaput. The company reached out to the building’s owner and management firm.

“We said, ‘We see what’s coming. If this is a prolonged event, Knotel is going to run out of money,’” Salmanson said. And, so, the parties worked out a deal in which Cherre would take over the lease and continue to occupy the space if Knotel went under.

As it turned out, Knotel stopped paying rent on the property, even before it filed for bankruptcy at the end of January (though it continued to collect rent payments from Cherre, Salmanson said), and Cherre took over the space around the beginning of 2021.

“We worked with [the building] to evict Knotel from the premises before the bankruptcy and assumed the lease directly under different terms,” Salmanson said.

Cherre signed a three-year lease for the same space for less than what it had been paying Knotel.

“We got a good deal,” Salmanson said.

Not, perhaps, an ideal situation, but all things considered, it was a relatively smooth transition.

The same can’t be said for the flex office business generally. Based on holding long-term office leases and then subleasing space for shorter terms at higher rates, it was a model seemingly tailormade to get squashed by the COVID-19 crisis, which saw office occupancy plummet.

In December, Montreal-based startup Breather laid off much of its staff and began closing its 400-plus global locations, including 315 U.S. sites, as part of a plan to shift to an online-only platform.

“The decision I’ve made is that Breather, in its current form as an operator, doesn’t make sense, and, to be frank, I’m not sure it ever made sense,” CEO Bryan Murphy told The Globe and Mail at the time. “I want to be like Airbnb.”

Last month, landlord Walter & Samuels sued flex operator WeWork for $37 million, alleging that the company defaulted on its lease at 214 West 29th Street. (The suit was later dismissed.) WeWork was also sued in July for $54 million by landlord 2221 Park Place Partners, which accused the company of backing out of a 10-year lease on 90,000 square feet in an El Segundo, Calif., office building.

Meanwhile, the firm has been shedding properties throughout the pandemic, including 349 Fifth Avenue, 149 Madison Avenue, and three of its Washington, D.C., locations. In March, WeWork alerted its tenant, the Marks Law Firm, that it would be closing its location at Manhattan’s 175 Varick Street in April, prompting a lawsuit from Marks that the two parties settled last month.

Alex Snyder, assistant portfolio manager at CenterSquare Investment Management, said, though, that WeWork has experienced relatively little friction from tenants as it has downsized, in large part because the office space it has shed was either mostly unoccupied or had yet to open.

“If they are shutting down a location, it’s because there aren’t enough tenants there,” he said. “If it’s full, they aren’t shutting it down.”

Snyder also noted that many of WeWork’s shutdowns were in New York City, where the company had “a preponderance of space, and they could always just shift that [tenant’s] membership to another space as long as they were OK with it.”

The situation for Knotel’s former tenants has been somewhat different, said Michael Thom, owner of New York City-based IT firm ThomDigital Group. Thom began working for Knotel three years ago and handled IT at more than 100 of the company’s sites. He said that since the firm’s bankruptcy, he has been scrambling to keep a number of its former tenants connected to their office IT systems.

Thom said that while Knotel’s precarious financial situation had been clear for months, the company had continued to reassure tenants it had the funding to keep the doors open and the lights on.

“And they played that story all the way up until literally Jan. 31 at 5 p.m., when 125 landlords got the same blanket email saying, ‘we’re abandoning our property, everything that’s left there is yours,’” Thom said. He added that another email went out at the same time informing Knotel’s former tenants that they no longer had access to their space and needed to contact their buildings’ owners to work out new deals.

“That happened without any notice,” he said. “If you tried to get into your office at 5:30 on the 31st, your keycards didn’t work.”

The situation sent Knotel’s customers and landlords scrambling, Thom said. Most relevant to his firm was the IT angle.

“The internet circuit, the network equipment, the Wi-Fi, the printers, all equipment, all of the access control and badging for the doors was controlled by Knotel, and [the tenants] had no access to any of it,” he said.

How long it took to get things up and running again depended largely on the tack the landlord took with Knotel’s former tenants, Thom said.

On the other hand, some landlords decided they didn’t want the tenants back into the office until they signed a new lease, he said. “That’s a pretty strong negotiating tactic. You can’t get back in until you sign on the dotted line.”

While the spaces had been vacated suddenly, they were fully outfitted ready to go. And that, Thom said, provided landlords with an opportunity.

“I’ve been talking to a lot of landlords and helping them understand that now they have an abandoned space that is fully built out,” he said. “It’s full of furniture, branding, everything; it was just sort of ghost-towned overnight. You can remarket your space as fully turnkey.”

Many landlords aren’t interested in offering turnkey space, though, Thom said. “They just want to rent square footage. They don’t want to have the headache from a tenant of, ‘Oh my internet doesn’t work, or my door doesn’t work.’”

That said, “there is large additional revenue from having a turnkey space,” he noted. That’s especially true when everything you need for a fully functioning office has been left behind.

As a landlord, “I’ve got furniture. I’ve got everything technology-wise. I can charge a little bit more for this, and I don’t have to worry about doing anything — it’s already there,” Thom said. He said that former Knotel buildings like 588 Broadway and 116 West Houston Street were now renting out turnkey space. At 116 West Houston, owner Y&H Realty Corporation is also suing Sarva over $644,443 in unpaid rent.

One company that recently took advantage of this situation is commercial real estate outfit Lev, which took over 12,500 square feet in a former Knotel space at 584 Broadway.

“We were looking for a new office, and Knotel had just vacated this space,” said Lev Founder Yaakov Zar. “The amount to which it was built out was definitely very attractive. We literally just walked in with our computers. There were whiteboard markers on the whiteboards. We didn’t have to do anything.”

Making the transition especially easy was the fact that when Zar went looking for someone to get the office’s IT up and running, his broker introduced him to Thom, who, as it happened, had built out the space’s information system for Knotel.

“There was a ton of hardware and computers and TVs and network equipment in the space, and we were trying to move in and we didn’t have access to anything,” he said. “We did a call with [Thom] and he was like, ‘oh, yeah,’ and he pulled up in his system every single thing about the technology here. He had done the build-out, so he knew everything. It was crazy.”

Lev inked an agreement for the space at a price below Knotel’s rate and for a shorter term than a typical 10-year office deal, though Zar declined to give the exact term of the lease.

While, as Thom noted, office landlords haven’t traditionally been crazy about getting into the flex space business, that could be changing. According to a report by The Instant Group, U.S. demand for flex office space grew 21 percent in the second half of 2020. Crain’s New York Business reported last week, too, that SL Green is offering the 54th floor of its One Vanderbilt high-rise as flexible office space it has branded Altus Suites. The company plans to offer three- to 10-year leases on the space.

Also last week, CO reported that Tishman Speyer is opening new locations of its coworking brand, Studio, at 175 Varick Street (formerly a WeWork) and 11 West 42nd Street. With the openings, Studio will occupy 350,000 square feet in Manhattan. And Newmark, which in March received approval to acquire Knotel’s assets, appears to envision using those assets to build a flex office platform.

“Flexible workspace has been one of the fastest-growing areas of commercial real estate, and we expect this adaptive model will play an important role in the future of our industry,” Newmark CEO Barry Gosin said in a statement following approval of the acquisition.

Even WeWork is, after a long and winding road, finally going public. The company announced in March that it planned to list on the Nasdaq via a merger with special purpose acquisition company BowX Acquisition at a valuation of $7.9 billion.

While the pandemic has walloped flex space firms, it has also provided an opportunity to cut lease obligations and renegotiate deals with landlords who are loathe to see tenants leave, given the current uncertainty around the office market.

Cherre CEO Salmanson said that while managing and financing flexible office space was more complicated than for traditional office space, such products were very appealing, especially for expanding companies like his.

“As a growing company, I don’t want to sign a seven- to 10-year lease,” he said. “It makes no sense to me, because I’m going to be either bigger or smaller. I’m not going to be the same size unless something went really wrong. And given that I don’t want to take a long-term position, I’m perfectly fine paying a premium to have a shorter-term lease.”

Update: This story has been updated to show Walter & Samuels’ lawsuit against WeWork was dismissed.