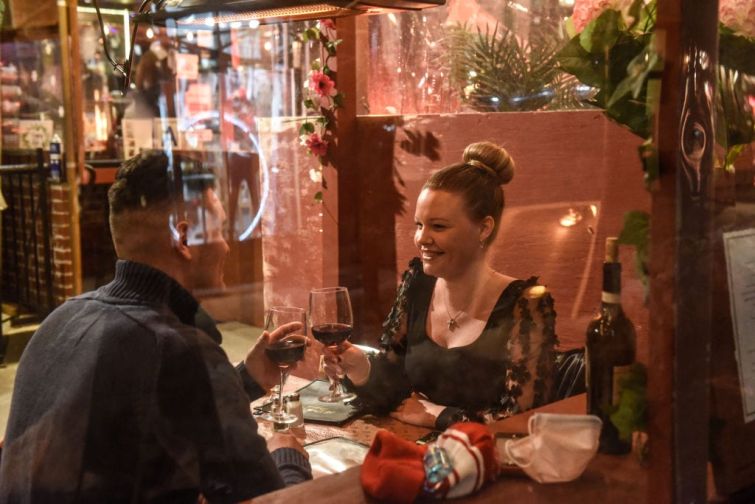 Indoor dining can be offered at a 50 percent capacity in New York City starting on March 19. Photo: Stephanie Keith/Getty Images

Cuomo upped restaurants’ capacity for indoor dining from 35 percent in partnership with New Jersey Gov. Phil Murphy, as the number of positive cases of the coronavirus continues to decline around the city.

“In New York state, our decisions are based on science and data and we are encouraged by the continued decline in infection and hospitalization rates,” Cuomo said in a statement. “We will continue to follow the science and react accordingly. If we keep the infections down and vaccinations up, we will continue to stay ahead in the footrace against this invisible enemy and reach the light at the end of the tunnel together.”

The news comes days after Cuomo announced that restaurants in New York outside the city can offer indoor dining at a 75 percent capacity and was praised by some in the industry.

“While city restaurants may not increase occupancy to 75 percent like restaurants are safely doing throughout the rest of the state, it is still welcome news to the battered restaurant industry,” Andrew Rigie, executive director of the trade group New York City Hospitality Alliance, said in a statement. “Cautiously and safely increasing indoor dining capacity at New York City restaurants to 50 percent, with an eye toward expanding in the future, more vaccinations, and dedicated restaurant relief on its way from the federal government gives our industry some optimism among all the doom and gloom of this past year.”

Restaurants around the city have been reeling after emergency measures enacted nearly a year ago to fight the spread of the deadly coronavirus pandemic banned indoor dining. Eateries were forced to switch to takeout or delivery-only models.

Many restaurant owners struggled to pay their rent bills, more than 200,00 workers were laid off, and thousands of eateries aren’t expected to survive.

New York City first reopened indoor dining at a 25 percent capacity on Sept. 30, but shut it down a second time on Dec. 14 after the city saw another surge of positive infections. It returned on Feb. 12, and Cuomo upped the capacity to 35 percent on Feb. 26, putting the city more in line with New Jersey.