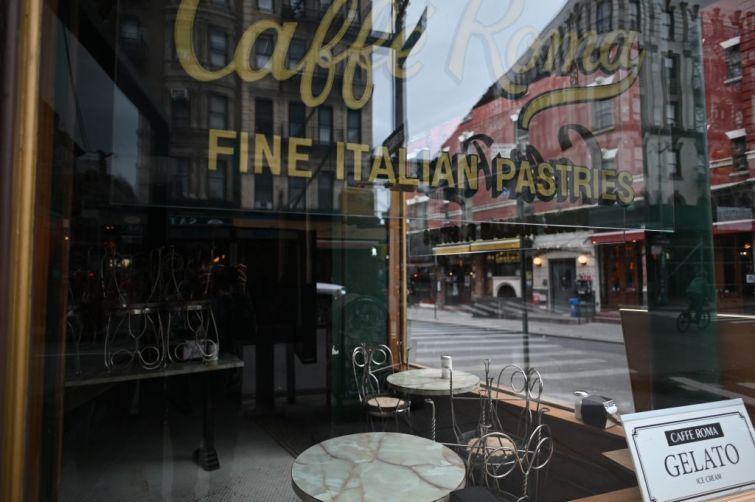 Restaurant owners across New York City have laid off thousands of workers as measure to mitigate coronavirus forced many to shut their doors. Photo: JOHANNES EISELE/AFP via Getty Images

The numbers are starting to come in on cuts to New York’s restaurant and hotel workers, and it’s not pretty.

Restaurant and hotel owners in New York City have filed notices to lay off thousands of workers as the novel coronavirus obliterates travel and Gov. Andrew Cuomo ordered eateries to switch to take-out or to-go models to stop the spread of the disease, according to state filings.

Since March 23, more than 100 different restaurant and hotel entities have filed Worker Adjustment and Retraining Notification (WARN) Act notices — which is required by employers to simply let workers know about upcoming job cuts — to New York state that will impact at least 11,100 workers, state records show. Previously, only one to two WARN Acts were filed per day.

“It really is staggering,” said Andrew Rigie, the executive director of the New York City Hospitality Alliance. “The situation is so fluid and ever-evolving that we don’t know where the end is [and] when restaurants are going to be able to open again and operate.”

Among the impacted restaurants are famed French eatery Le Bernardin and viral restaurateur Salt Bae’s Nusr-Et steakhouse, which both filled WARN notices last week for an unspecified number of staff. Others that have recently filed WARN Acts include CUT by Wolfgang Puck which let go of 74 employees, Virgil’s Real Barbecue in Times Square that laid off 143 workers and popular fast-casual chain Dig Inn which cut 273 people.

On the hotel front — which has lost billions in room revenues since the pandemic — institutions like The Plaza Hotel, The Carlyle and The Greenwich Hotel have cut staff.

Despite the large number of layoffs in the WARN Act notices, restaurateurs and advocacy groups said it’s likely a drop in the bucket in regards to the real impact on restaurant workers.

“For us, that’s a very low number,” said Max Katzenberg, the co-owner of Prospect Heights’ eatery Olmsted, which is credited with turning the neighborhood into a destination for diners. Katzenberg launched the New York Hospitality Coalition earlier this month with his business partner Greg Baxtrom, to advocate on behalf of the restaurant industry in the wake of the coronavirus pandemic. “Essentially, all [restaurant employees] have been laid off, only five to 10 percent are still employed.”

Earlier this month, Gov. Cuomo and Mayor Bill de Blasio ordered bars and restaurants in New York City to switch to take-out or to-go models only to encourage social distancing and stop the spread of COVID-19.

Olmsted, which did not offer delivery previously, considered the switch but the owners said it likely wouldn’t make up the lost revenues from sit-in diners.

“It would make 10, maybe 20 percent, of our normal revenue,” said Baxtrom, who was forced to lay off 60 employees last week. “We talked about going delivery, and Max and I just couldn’t pull the trigger knowing that we were just putting people in harm’s way.”

Rigie’s New York City Hospitality Alliance — a nonprofit group that advocates for restaurant owners — surveyed 1,870 restaurants, bars and nightclub purveyors and found they expected to lay off or furlough more than 67,650 employees because of impacts from the coronavirus.

“What makes our survey so concerning was that it was just a snapshot,” Rigie said. “It was fewer than 2,000 of the more than 25,000 establishments.”

Rigie said that the layoffs have impacted everybody from small mom-and-pop establishments to giant restaurant groups. Earlier this month, one of the largest restaurant companies, Danny Meyer’s Union Square Hospitality, announced it laid off 2,000 employees in its 20 restaurants around the country and Manhattan corporate office, The New York Times reported.

Laid-off employees likely won’t receive any benefits under the WARN Act, said Jack Raisner, a professor at St. John’s University who worked with Sen. Charles Schumer, prior to the city’s coronavirus outbreak, on changes to the federal mandate. The WARN Act simply requires employers that lay off a certain amount of staff — 25 or more employees that make up at least 33 percent of a company in New York — to give them 60-day notices about the job loss.

“There is a need for a policy providing some kind of severance for employees who are let go in a mass layoff,” Raisner said, adding only New Jersey has such a policy though it doesn’t take effect until July. “It takes time for people to obtain unemployment if they’re entitled to it.”

“People who are let go are in a free fall. It’s disastrous,” Raisner added.

The current law does require employers to pay out 60-days of wages if they don’t comply with the WARN Act, but many have been citing COVID-19 as unforeseen circumstances to avoid paying, Raisner said.

“It’s hard to say that this was unexpected,” he said, given that many cities started preparing for the coronavirus outbreak in early March.

It’s not just the restaurant industry that has been reeling because of the pandemic. Last week, 3.28 million people across the country filed for unemployment — easily beating the previous all-time high of 665,000 — while economists project the total number of job losses to reach 47 million, according to CNBC.

Restaurants have had a 47 percent drop in sales from March 1 to March 22 across the country, according to a survey of more than 4,000 owners by the National Restaurant Association. Of the ones that took part in the survey, three percent permanently shut their doors while another 11 percent said they expect to do the same. Forty-four percent said they have temporarily shuttered and 54 percent switched to off-premises service only, the survey found.

The recently passed Coronavirus Aid, Relief and Economic Security (CARE) Act does help the industry, but Rigie said there are problems. While it will provide up to $349 billion in forgivable loans to small businesses, they’re required to bring back laid-off employees.

“We don’t need workers back right now because we’re still required by the government to be shut,” Rigie said. “And most restaurants will not need the same size labor force, at least initially, because we’re uncertain how the coronavirus is going to impact future purchasing behavior.”

Olmsted’s Katzenberg also said that it extends to restaurants that employ 500 people by location, meaning franchisees of major food chains could be covered, since smaller mom-and-pops don’t have the resources or backing of a bigger corporation to survive.

“That’s a big problem,” he said. “We are working really hard on getting that corrected in either how the package is administered or in the full stimulus bill.”

Rigie added that the loans might not be able to cover all the startup costs that are going to hit when restaurants can open — like back rent and sales tax.

Both Rigie and Katzenberg said one thing that could really help would be requiring insurance companies to pay claims to restaurant owners, which they haven’t done citing “act of God” provisions.

“The American insurance carriers of small businesses have abandoned us,” Katzenberg said. “What has to happen is the insurance companies have to really pay the claims on the condition that the federal government’s bill is not enough. That would be an enormous windfall.”