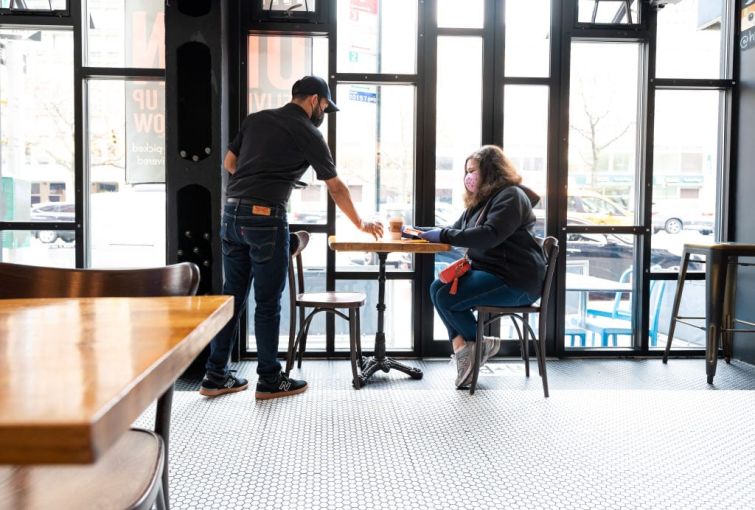 Indoor dining around New York City will be banned again starting on Monday as the city continues to see a surge in the number of coronavirus cases, Gov. Andrew Cuomo announced on Friday.

Restaurants will only be allowed to offer outdoor dining and takeout, and Cuomo blamed the second shutdown of indoor dining this year on the increasing COVID-19 hospital rates.

“We said that if the hospital rate did not stabilize, we would close indoor dining; it has not,” Cuomo said at a press conference on Friday.

The rest of New York state will be allowed to continue indoor dining, but capacity will be reduced from 50 percent to 25 percent. That could change, Cuomo added, depending on the hospitalization rates in the future. Cuomo said the state will reevaluate reopening indoor dining in the city in the next two weeks.

The New York City restaurant industry has been battered since the state stopped indoor dining in March and forced eateries to switch to takeout- or delivery-only models. Many have struggled to pay rent, thousands of workers have been laid off, and thousands of restaurants are expected to close.

The city allowed indoor dining to return at a reduced capacity on Sept. 30, but as the number of positive coronavirus infections surged in recent weeks, many feared the possibility of a second shutdown. Danny Meyer’s Union Square Hospitality Group — which laid off 2,000 employees earlier this year — already suspended indoor and outdoor dining at its New York City locations on Nov. 20.

“Everybody I speak to is out of [Small Business Administration] money, they’re out of [Paycheck Protection Program] money, they’re hanging on by a thread,” James Famularo, president of Meridian Retail Leasing, previously told Commercial Observer. “I don’t think people could take another shutdown. That will be the final blow.”

Andrew Rigie, executive director of the New York City Hospitality Alliance trade group, slammed Cuomo’s decision, and pointed to the fact that Manhattan has a lower positivity rate than places upstate where indoor dining can resume.

“While public health and safety must be paramount, Gov. Cuomo’s announcement to once again shut down indoor dining in New York City is at odds with the state’s own data that’s been presented as driving these decisions, and it will be the last straw for countless more restaurants and jobs,” Rigie said in a statement. “Closing indoor dining in New York City will severely jeopardize the survival of countless small businesses and jobs, and now it’s more important than ever that all levels of government pass critical support to help save the industry.”

Cuomo on Friday acknowledged the damage that halting indoor dining will wreak on the restaurant industry, and urged the federal government to pass an additional relief package to help small businesses survive.

“The federal government must provide relief to these bars and restaurants in this next package,” Cuomo said. “I understand you’re wiping out businesses.”

The governor also announced that the city will extend the commercial eviction moratorium, but that hasn’t stopped landlords around the city from taking hundreds of struggling small businesses to court over rent.

Cuomo also said the state is expected to get 170,000 doses of one coronavirus vaccine “imminently,” with another 360,000 doses of another set to arrive the week of Dec. 21.

Despite the hope of a vaccine, Cuomo warned that it could take until June before the volume of vaccinations hits a critical mass around the state, and the number of cases, meanwhile, could explode in the coming weeks due to the holiday season.

“We can’t get complacent,” Cuomo said. “We’ve only been at this for nine months; we have another six months to go.”