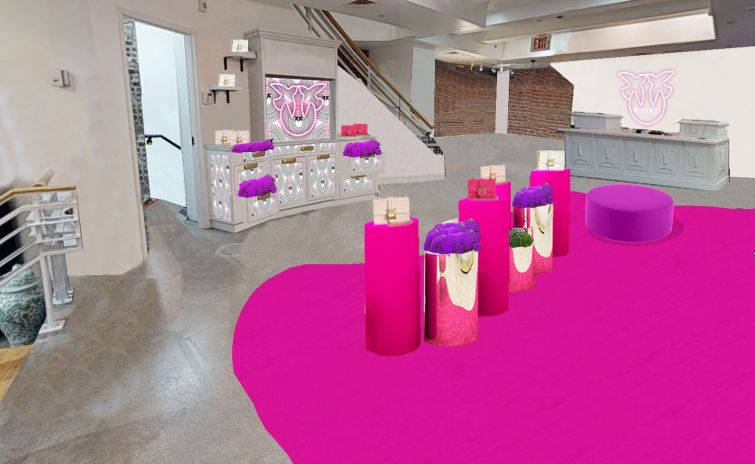 A rendering of Pinko's new store at 143 Spring Street. Photo courtesy of Pinko

The Italian women’s fashion brand Pinko is popping up with a big statement in SoHo, by taking over the entire three levels of 143 Spring Street for its new U.S. flagship.

The global brand signed a lease for 4,925 square feet in Buchbinder & Warren Realty Group’s two-story building on the northeast corner of Wooster Street. The store will have 100 feet of wraparound frontage that includes a brick entrance on Spring Street, which leads to a dramatic modern annex with a two-story transparent glass curtain wall. There is also a full cellar.

The deal gives the fashion house a significant presence as it takes over the former One Kings Lane store under a sublease from Bed Bath & Beyond.

“This represents the turning point in the upscale retail real estate market in New York City, which was severely impacted by the pandemic,” said Alex Carini, founder and CEO of Carini Group, who represented Pinko, along with colleague Cristina Roccisano. Carini also pointed to the Valentino lease at nearby 135 Spring Street as another sign of life for the ritzy neighborhood’s retailers.

Michael Azarian and James Ariola from Cushman & Wakefield represented Bed Bath & Beyond in the deal.

In a statement, Pietro Negra, chairman and CEO of Pinko, said the brand will grow its U.S. presence from the current six locations to 10 over the next three years. “Our new Manhattan store launches our American expansion plans,” Negra said.

Celebrities have been drawn to its apparel, with sisters Paris and Nicky Hilton jumping on board in 2006. Taylor Swift wears one of its sweatshirts on the cover of her 2017 album “Reputation” and, last fall, Ariana Grande’s video, “Positions,” depicts her in a vintage Pinko houndstooth coat. Bella Thorne also carried the brand’s shoulder bag on Instagram.

Pinko brought in local interior designer Deborah Mariotti, of Brooklyn-based Mariotti Studio, to assist with Pinko’s in-house design team for the new SoHo store, as well as manage the project and develop the lighting design. Mariotti said, “to add playfulness and movement, the shop will feature an inflatable air dancer figurine in colors complementing the interior design elements.” The store is expected to open in April.

The new store’s attractive, brick-clad building was erected in 1818 as the Josiah Purdy House and was later operated as a saloon.

While just a one-year lease was negotiated, at what Carini calls “a very significant discount from the other tenant’s lease,” equating to the greater of its monthly rent of $30,000, or 15 percent of its sales, the brand is putting a lot of money into the design and expects to work out a deal to remain long term, Carini said. To put it in perspective, at $30,000 per month, the payments would barely cover $345,802 per year in hefty property taxes on the building.

This is not Pinko’s first rodeo in the city. It has had a small store at 414 West Broadway for the last five years, but when Carini took over the account, they felt it needed a larger presence in SoHo.

Last spring, as the coronavirus pandemic shuttered stores, Carini negotiated a half-payment for its lease that was deducted out of its letter of credit, along with an option to close the store at the end of the year, which it did after finding its new spot on Spring Street. Carini is now the agent on that 1,500-square-foot space that has an asking rent of $25,000 per month.

Pinko also had a lease at 1058 Madison Avenue, but determined its fun frocks weren’t in line with the Upper East Side’s more classic aesthetics, so Carini negotiated a surrender agreement in May with payments also coming out of its letter of credit.