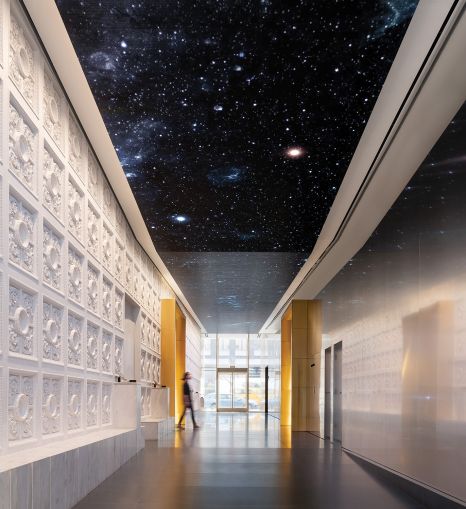 FXCollaborative installed a series of LED tiles on the ceiling with moving video installations by David Niles. Image: Chris Cooper 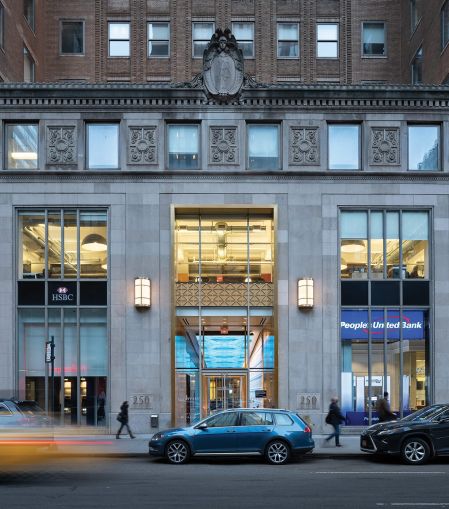 As part of the renovation, FXCollaborative also put in new entrances on Park and Vanderbilt Avenues. Image: Chris Cooper 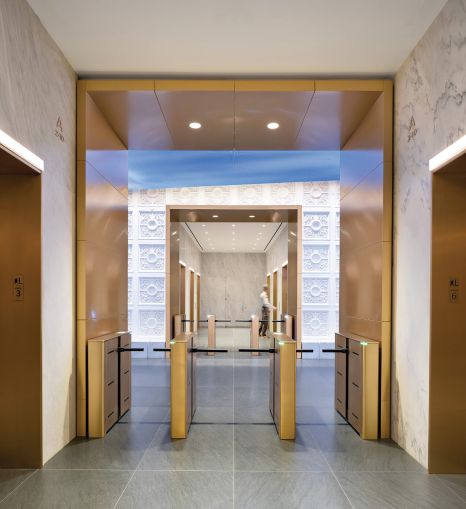 The updates, which include new brass entry portals and marble walls in the elevator lobby. Image: Chris Cooper
Previous Next

A picturesque, Neo-Classical office building near Grand Central is getting a fresh entrance and an LED video art installation along its lobby ceiling in the hopes of attracting new tenants during the pandemic.

Landlord AEW Capital Management decided to renovate the 20-story, half-million-square-foot building at 250 Park Avenue because the lobby and entrances hadn’t been updated since the 1990s.

“The previous lobby functioned well, but it was time to modernize and see how we could be more efficient in our layout,” said Cushman & Wakefield’s Whitnee Williams, who is on the building’s leasing team. “The previous lobby had a half-circle design that was replicated throughout the interior” with a vaulted ceiling, she noted.

The aim was to make the lobby feel larger than it was, and to create a way for tenants to check-in without a traditional reception desk, which took up too much real estate in the small entryway.

The ceiling, which moves with a rotating selection of animated art pieces created by David Niles, helps make the long hallway off the lobby seem wider. The architects, FXCollaborative, also put in polished aluminum panels along one wall and detailed, white plaster medallions on the opposite wall. The medallions are copies of architectural details that run above the building’s entrance.

Angie Lee, an architect with FXCollaborative, said she wanted to “create a sense of space and ceiling heights. There was a barrel vault that gave the illusion of height but tamped down on that sense of expansiveness. We lifted the ceiling and put up a video canvas for a lot of different types of artistic content.”

The renovation added bronze panels and turnstiles in the entrances to the elevator lobbies. The bronze is meant to echo the double-height entrance on Park Avenue, which has long been clad in glass with a bronze awning. The glass was replaced, and new bronze paneling was added around the doorway.

The work also involved creating a new lobby entry on Vanderbilt Avenue, opening up what was previously an opaque maintenance entrance. Construction started in March 2019 and wrapped in June 2020, though the LED ceiling tiles were not installed until January.