The firm plans to redevelop the 8.3-acre site 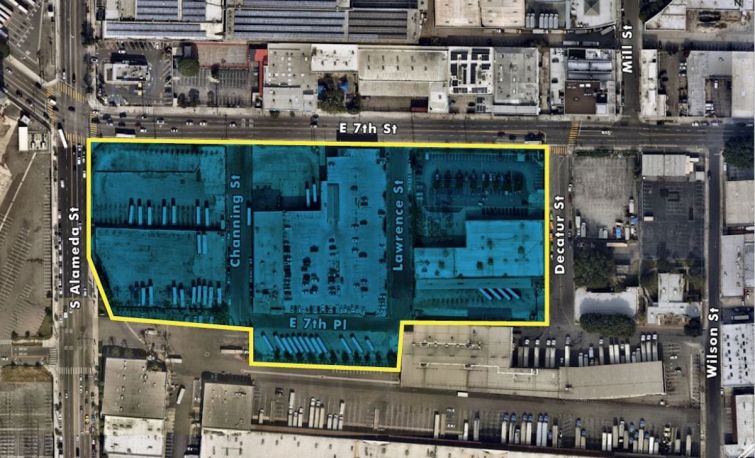 The 8.29-acre site is located at 1526-1716 East 7th Street across the street from a future Metro Station. photo: courtesy CBRE

Add another redevelopment site to the growing list of recent trades in Southern California.

The seller was Greyhound Lines Inc., which will lease back the property on a short-term basis before it relocates. Prologis plans to pursue entitlements and redevelop the property. The 8.29-acre site is located at 1526-1716 East 7th Street across the street from a future Metro Station.

“The property could serve a variety of uses including single and multi-story industrial, transportation logistics development, or renovation of the existing improvements to create a low-coverage last-touch facility,” Kim Snyder, west region president at Prologis, said via email.

CBRE announced the sale and represented Greyhound, but declined to share the asking price.

Downtown L.A. is undergoing a years-long development boom. Related California is currently building the $1 billion mixed-use complex called The Grand, which will include 436 luxury residences, a 309-room Equinox hotel, and retail space. This month, the L.A. City Council’s planning committee is set to consider Onni Group’s massive 1.51-million-square-foot Times Mirror Square project, which will add to the firm’s expansive portfolio in the district.

Commercial trades have also picked up in Southern California the past few months. Skanska announced last week that it acquired a second property in Beverly Hills with plans to build 44,000 square feet of office space. Just before 2020 ended, CO reported that Lendlease acquired a property near Culver City for $92 million with plans to build a $600 million mixed-use complex.

As Amazon’s largest landlord, Prologis has benefited from the growing e-commerce and logistics industries. In August, US Elogistics Services Corp. signed a 232,229-square-foot lease at the 16-acre property owned by Prologis in Vernon, just south of Downtown L.A. The firm also has a strong presence in the Inland Empire and other manufacturing and distribution hubs.

Updated: This story has been updated to include commentary from Prologis. This version has also been corrected to reflect the planned use. The original version stated it would be a mixed-use development, per CBRE.