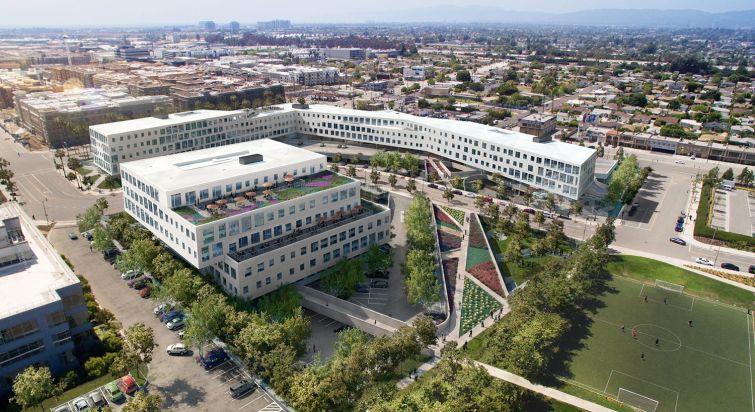 Los Angeles’ most significant lease of the quarter was downtown as the Department of Water and Power (LADWP), the country’s largest municipal utility, took 132,000 square feet at 233 South Beaudry Avenue.

The agency is paying $72.5 million for 10 years in the space, which Michael Delijani‘s Golden Hill Properties LLC owns. Delijani’s father, the late Ezat Delijani, was a real estate investor known for buying and saving several of L.A.’s historic theaters, including the Los Angeles Theater, the Palace Theater, the State Theater and the Tower Theater. The younger Delijani also bought L.A.’s Barclay Hotel in 2018.

LADWP has an option for a five-year, $39 million extension, and claims responsibility for $15 million in operating expenses. The City Council approved the lease on April 1. (The lease was first reported in The Real Deal.)

While government entities took considerable space, tech was not to be left out. Facebook expanded its space at Tishman Speyer’s the Brickyard at 12105 West Waterfront Drive and 12126 West Waterfront Drive by 84,616 square feet. The social media giant initially signed for 260,000 square feet over two buildings in the Playa Vista complex in 2018. The company occupies the entirety of a 122,000-square-foot building there, and 140,000 square feet at another location in the complex. The initial lease had a rent of $67.80 per square foot. Facebook moved to the Brickyard in early 2019, and also occupies 50,000 square feet at Playa Vista’s 12777 West Jefferson Boulevard.

Playa Vista also saw Vista Studios sign a long-term, 20,907-square-foot lease at 5415 Jandy Place in Silicon Beach. Effkay Enterprises owns the space, and the asking rent in the triple-net deal was $1.95 per square foot per month.

Amazon set deeper roots in the area in May with a lease of approximately 100,000 square feet at the Center at Needham Ranch, a 252-acre industrial park that Trammell Crow Co. and Clarion Partners LLC are building in Santa Clarita. The location will serve as a distribution center for the e-retail giant.

In August, U.S. Elogistics Services Corp. signed a 232,229-square-foot, full-building lease at the 16-acre Prologis Vernon Business Center in Vernon, which is just outside of L.A.. According to Commercial Property Executive, which reported the transaction, the deal marks the largest industrial lease in central L.A. County this year. Joe Dimola, a senior vice president at JLL, assisted the tenant, and Newmark Knight Frank Vice Chairman John McMillan repped the owner, Prologis.