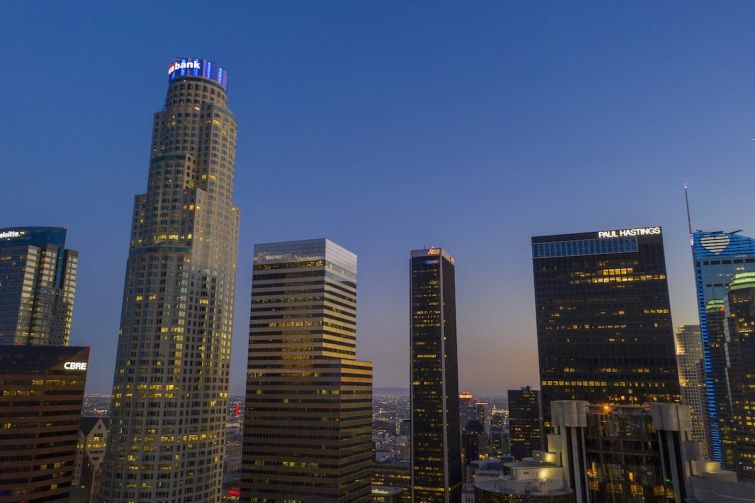 The U.S. Bank Tower, left, seen in Downtown Los Angeles in May, shortly before it sold to Silverstein Properties. The tower and other high-rise office buildings have been absent more often than they are filled with workers since March when Gov. Gavin Newsom ordered Californians to stay home during the pandemic. Photo: David McNew/Getty Images 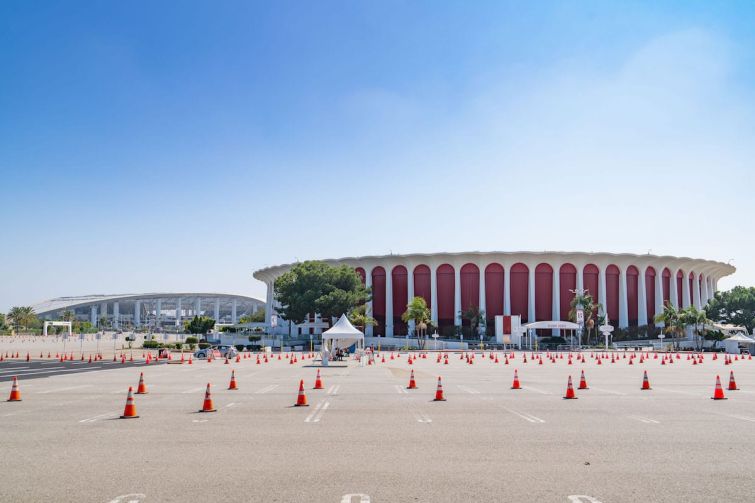 The Forum with SoFi Stadium to the left in Inglewood in September. L.A. Clippers, billionaire Steve Ballmer, paid $400 million to acquire the Forum Photo: AaronP/Bauer-Griffin/GC Images 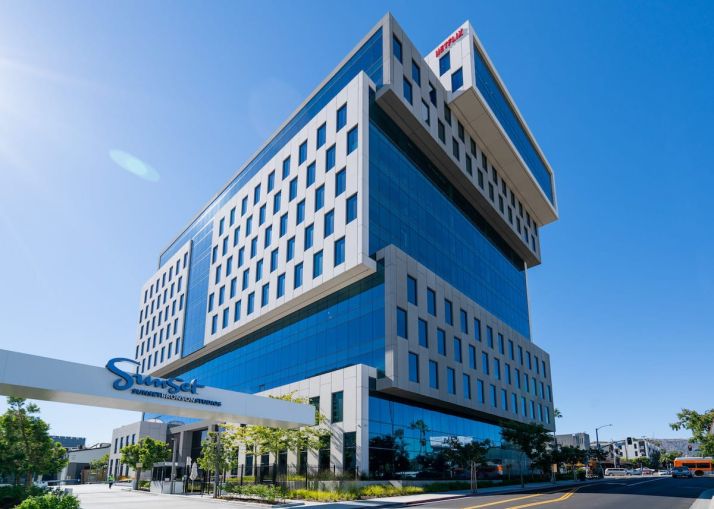 The Netflix corporate offices in Hollywood at Sunset Bronson Studios in August. The building is part of Hudson Pacific Properties's portfolio Photo: AaronP/Bauer-Griffin/GC Images
Previous Next

If it weren’t for the month of November, the list of the top commercial real estate sales in Los Angeles County would look painfully bleak.

Many times this year, it felt like that, too — especially in the retail and office markets. Few sales were closing, let alone any major ones, and reports of increased vacancies and record low leasing activity dominated the narrative amid the work-from-home phenomenon.

Thankfully, not all was lost. Due to the pent-up demand for content, Blackstone Group brought back the billion-dollar deal over the summer. And the owner of the L.A. Clippers, billionaire Steve Ballmer, needed to end a years-long dispute, so he made a $400 million deal for the Forum arena this year to make the dispute go away. Otherwise, the other biggest deal came at a major COVID-induced discount.

But, then in November, it felt like commercial real estate had its mojo back in L.A. There were major office deals on the Westside, as well as further proof that industrial is king, when Rexford Industrial Realty announced it put down almost $300 million in a warehouse deal. November also brought a major high-end retail sale on Rodeo Drive and other office trades that closed just below the following deals.

Studio deals, streaming wars, and demand for content sparked some of the few bright spots in Los Angeles real estate this year. And one deal stands out as the obvious favorite that led the way, giving energy to a near-lifeless commercial real estate market in the dead of a COVID-strapped summer.

Commercial Observer first broke the news of the deal of the year, when Blackstone agreed to take a 49 percent stake in Hudson Pacific Properties’ studio and office portfolio in Hollywood. It includes 35 stages and almost 1 million square feet of office space — nearly 75 percent of which is leased to Netflix. The office portfolio includes the ICON, CUE, and EPIC buildings, as well as the soon-to-be-completed Harlow development, which received its certificate of occupancy in the third quarter.

CBRE reported that, after the past three years, the increasing demand for soundstages in Hollywood led to about a 20 percent increase in rents at Hudson properties. And Bill Humphrey, senior vice president of Sunset Studios, told CO in September that Hudson has been increasing rents since the pandemic hit.

The firm is also currently advancing plans to expand the Sunset Gower Studios through entitlements. The studio already includes Netflix and ABC as tenants.

Larry Silverstein’s firm came from the East Coast and agreed to put down $430 million to acquire the most recognizable building in Los Angeles’ skyline. Standing more than 1,000 feet high, the U.S. Bank Tower includes about 1.4 square feet of space.

But the deal is not as good as it sounds. According to media reports, the owners were first seeking $700 million when they put it on the market in 2019. Thus, Silverstein scored what will likely be the coronavirus-driven discount deal of the year in Downtown L.A. at nearly a 40 percent cut.

According to previous owners, OUE Limited, the $430 million price was reached “after taking into account, among other things, the market value of the property and the current U.S. property market conditions in the relevant sectors amid the COVID-19 pandemic.” The company also said rental income from the property has been affected by the government shutdowns, which caused tenants to reduce or close operations.

Apollo Global Management backed the acquisition with a $275 million loan.

The $400 million sale of the Forum arena finally settled the score between the owner of the NBA’s Los Angeles Clippers and the owner of the New York Knicks — but not over any basketball game. It was the final “godfather” deal made after a game of chicken between two mega-rich billionaires in their battle over the future Clippers arena set to rise about a half-mile from the Forum.

After years of accusations of under-the-table deals with local politicians, at least a half-dozen lawsuits, and an expensive and contentious mayoral race in a town of 110,000 people, the sale was the peacemaker.

Madison Square Garden Company (MSG) and its CEO James Dolan own the New York Knicks, as well as the Forum arena in Inglewood, Calif. The company fought against the City of Inglewood after its officials gave land — which was originally leased to MSG — to Clippers owner Steve Ballmer to build a $1.1 billion complex with a state-of-the-art arena for his basketball team and other entertainment events. This came after MSG spent $100 million rehabilitating the Forum about a half-mile away.

The $400 million sale price was likely a bit of an olive branch, considering MSG paid $23.5 million for the Forum in 2012. But Ballmer, who has an estimated net worth of $73 billion, likely considered that to be the cost of doing business to avoid months or years of litigation, which could delay his plan to open the new Clippers arena for the 2024-2025 NBA season.

Thanks to e-commerce, warehouse real estate is the only major asset class that is not only remaining strong this year, but reportedly expanding rapidly due to the pandemic. With retail stores under restrictions and capacity limits for the majority of 2020, the demand for online shopping has skyrocketed. That means manufacturing, storage and distribution are king.

The deal pencils out to $300 per square foot. Rexford funded the acquisition with cash on hand and proceeds from prior dispositions via 1031 exchanges. It was owned by Gateway Pointe Investors, which is tied to Washington Capital Management and Unire Real Estate Group.

The deal was announced just as the Port of Los Angeles reported its busiest month ever in October, showing the growth and strength of the distribution sector, as experts say the pandemic accelerated the need and demand for emergency inventory. E-commerce returns this holiday season could total as much as $70.5 billion, which would amount to a 73 percent increase from the previous five-year average, according to CBRE research.

Despite a worldwide pandemic, West L.A.-based Rexford closed nearly $730 million this year, and expects some $600 million more to close in the next few months.

November could have been the start of a big turnaround for the office market. Overall activity is still slower than normal, due to another new round of stay-at-home orders and spiking coronavirus cases. But significant investments and sales started to hit the wire last month, led by Northwestern Mutual in Santa Monica.

The insurance and investment firm put down $166 million to pick up the city’s premier office space called Colorado Campus, The Real Deal first reported. It’s fully leased to Universal Music Group and animation studio Illumination. It was owned by Lincoln Property Company and Northwood Investors, who converted the property from industrial a couple of years ago.

Prior to the coronavirus outbreak and subsequent economic shutdowns, media firms like Universal and Illumination were driving office market development and leasing activity, adding or taking up millions of square feet per quarter.

Next to an office building it already leases, the technology giant acquired a block of offices and warehouses for $162 million that were owned by Venice Pacific Investments, according to CoStar. The properties currently include a flex office property, a traditional office property, and a warehouse and storage facility, and two other properties. Apple could redevelop the properties and combine them into one office or studio campus.

The site is next to an office building owned by Clarion Partners and Lincoln Property Company that spans 128,000 square feet and is leased to Apple.

Tech firms, as well as streaming firms and production companies like Netflix, Amazon Studios and Apple TV+, make up a growing segment of office space in L.A. With companies like Google and Facebook extending their work-from-home strategies as stay-at-home orders return, the significance of a major firm like Apple continuing to invest in new real estate in a tech hub like Culver City can’t be overstated.

Retail is, without a doubt, the sector that is most up against the ropes. Old defunct malls were the stages for a wave of conversions even before the pandemic, and online shopping continues to grow.

But traditional high-end retail, where the experience of luxury means just as much as the products, can hopefully lead the way for retail to survive and thrive moving forward.

In November, Crown Equity and Ascendent Capital Partners sold the 11,600-square-foot property at 457-459 North Rodeo Drive in Beverly Hills for $122 million. That deal pencils out to about $10,500 per foot, and 20 percent more than what they paid for it in September 2018.

It’s currently leased to Alexander McQueen and Brioni, which is set to vacate soon, according to media reports.