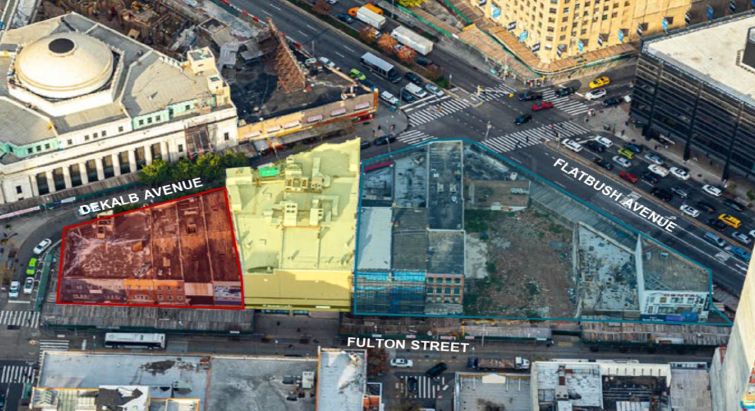 The firm came onboard last week following a marketing process that began as a sale of the assemblage but morphed into a new partnership being formed.

“It’s very early days,” one source said. “Options are now being explored as to what makes the most sense [for the future of the development].”

The 14-lot, 36,290-square-foot land assemblage, also known as the Fulton assemblage, comprises two sites that sit on both Fulton and Flatbush avenues at 547-557 Fulton Avenue and 559-589 Fulton Avenue. RedSky and JZ Capital acquired the first sites in November 2012, and over the next seven years made nine additional separate acquisitions to fully assemble the development sites.

As reported by Crain’s New York Business, the $154.6 million loan on the property, provided by Apollo Commercial Real Estate in April 2017, fell into default in March.

“The sponsor’s basis was much higher than the debt, and it wasn’t worth continuing to put additional capital in,” one source explained. “So, Apollo worked with the borrowers on a process to go out and sell the property.”

Several interested developers responded with competitive offers to buy the assemblage outright from RedSky and JZ Capital, as well as different ideas around the best path forward for the project. However, it, ultimately, was decided that a sale wasn’t the best option at the current time, given the significant future value that could be unlocked at the site. As such, Witkoff was brought in as a development partner, to further the project along and refine some of the ideas floated.

Scott Alper, president and chief information officer at Witkoff, led the deal on behalf of the developer. Steve Witkoff and representatives for Witkoff didn’t respond to requests for comment.

While RedSky and JZ Capital’s initial approach for the site was a mixed-use development with multifamily housing atop a retail component, the building may now include more multifamily or an alternative use for the ground-floor space, but the evaluation process will be ongoing.

A lot will be determined by how the COVID pandemic plays out, and how its market impacts are felt, sources said, with various options being explored, including a new construction loan being sought for the project, a future sale of the project, or an additional joint venture partner entering the mix. “What they’re trying not to do is just sit on a piece of dirt, but, instead, progress with what most makes sense and will unlock value,” one source said.