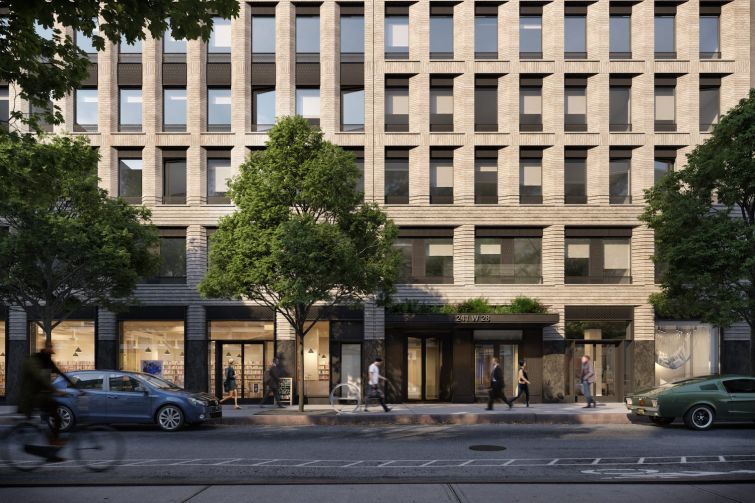 A new rental tower is now fully set to rise in West Chelsea.

MRC provided the developers with a three-year financing at a 65 percent loan-to-cost. Jeff Rosen, a managing director at MAG Partners, led the financing on behalf of the sponsorship. Maverick Capital’s Adi Chugh negotiated the debt.

“This, in some ways, is a bet on New York, but it’s also a recognition of the resilience of the industry in the face of the pandemic,” Gilmartin told CO today.  “This project is one I’m particularly proud of, because it took so very much to get here. And while I’ve been involved in financings and closings that have been far more complex — from a real estate point of view — I can tell you that all of the externalities and the dynamics associated with the last six months have made this closing a real accomplishment. We are really appreciative of all the sponsorship, including Madison.”

In 2018, L&L MAG signed a 99-year ground lease for the West Chelsea site, with plans to build a 372,000-square-foot COOKFOX-designed property that included retail space on the ground floor. Now that the L&L MAG partnership has split, it’s MAG Partners who is leading the project and it marks MAG Partners’ first standalone deal.

When completed, 70 percent of 241 West 28th Street’s units will be market-rate and the rest will be designated affordable. The project also benefits from a 35-year tax abatement. With the construction financing now sealed, development will kick off next month, and the building is expected to be delivered in 2022.

“We’re very excited to have closed this $173 million loan at a relatively low loan-to-cost with such an esteemed sponsorship group,” Zegen said. “This marquee 479-unit multifamily rental building, located within a few blocks of Hudson Yards and other prominent tech tenant expansions on the West Side, will be one of the only new multifamily rental projects built in Manhattan in the next few years. We were pleased to fill a void which would customarily be financed by conventional banks, and provide our flexibility, certainty and conviction.”

The deal is one of the few significant construction loans to close during COVID, and the sponsorship had to navigate the new debt playing field when selecting a lender.

“One complexity was that the conventional lenders are just not showing up at the dance, they’re all frozen,” Gilmartin said. “The usual suspects for us weren’t available to commit, and didn’t believe they could go the distance with us because the future is so uncertain. So, there was a smaller group of prospective lenders. I love [MRC] because Josh and his team are in our business; not only are they lenders, but there are builders themselves. They know how to underwrite risk, and they understand value creation associated with development.

“And that’s a rare thing in a lender,” Gilmartin added. “So, partly, it’s their DNA that brought them in and I think their staying power had a lot to do with how they’re hardwired. They were the perfect lending option for us, given the state of the city, the uncertainty, and for them it was all about the sponsorship, because they —like us — believe that this is a moment in time and that New York is going to come out of this.”

The project is close to some buzzed-about projects, including Vornado’s redevelopment of the landmarked former post office at 421 Eighth Avenue. In August, Facebook inked a 730,000-square-foot deal for the entire office portion.

“West Chelsea was — pre-pandemic — one of the hottest locations in all of New York, and it’s a very difficult place to afford a multifamily building because land prices are extraordinarily high,” Gilmartin said. “If you were just doing a straight-up purchase of the dirt you’d never pencil out on a 70/30 [project]; it just would never make sense.”

Gilmartin said that Edison, which owns the land, did not want to part with its interest in the site, “so, we have here an opportunity to put online a beautiful, mid-block, 22-story asset, and it’s very difficult to imagine that anybody else is going to be able to do what we’re doing,” she said. “We’re building this project in the heart of the tech community and, even through the pandemic, Facebook, Apple, Google and Amazon have all doubled down on the city. We think this particular location is really the heart of where much of the city’s growth and prosperity will lie.”

“This was a really unique opportunity for us to work with great partners and to make an investment in New York City residential but — more importantly — New York City in general,” Andrew Trickett, a partner at Safanad, told CO. “We looked at this project and its location, and this opportunity is a really great long-term bet on New York City. We’ve had a lot of headwinds flying around the marketplace today, but we have an enormous amount of faith in MaryAnne and her team’s ability to execute here.”

The rental tower isn’t Atalaya’s first foray into the Nomad market. In 2018, the investment fund provided $65 million in preferred equity as part of a $315 million construction financing for Flag Luxury Properties’ Ritz-Carlton hotel at 1185 Broadway.

For MRC’s part, it has been actively lending and investing through COVID-19. According to sources, the firm has raised more than $1 billion in capital since the beginning of the pandemic.

MRC’s ability to approach deals as a lender but with an owner’s perspective was an ideal fit for the 28th Street project, Chugh said.

“There’s an old saying that goes, ‘You cannot learn about roads from a road map. You can only learn about a road by traveling it,” he said. “And I think Josh is a perfect amalgamation of a lender who also is empathetic to the equity owner/ operator side of the business. When I am talking to Josh about a transaction, I’m talking to somebody who has a multi-dimensional understanding of the deal. He understands the deal from a finance perspective, and he understands the deal from a development perspective. He understands what is required for a developer to be successful, and then he creates a platform and a deal that gives them the tools to get there.”

As for what’s next for MAG Partners, Gilmartin has her hands full but is excited for the future. In July, she was appointed interim CEO of Mack-Cali, as reported by CO.

“One of the really big milestones for me and my team on this project is that I have spun off out of my partnership with David Levinson and Robert Lapidus, which was a two-year success,” Gilmartin said. “I’ve spun off into MAG partners, which I own 100 percent, and this project came with me along with my other projects. So what’s really exciting about this building is that it’s a hallmark of MAG Partners, which is a 100 percent woman owned, ground-up development company. With this talented group of people that I took from Forest City, I created L&L MAG and now have spun out into MAG Partners, and 28th Street represents the first project of many.”