Curren Price flouted CPC’s stipulations on digital billboards before the developer donated $75,000 to help him get reelected 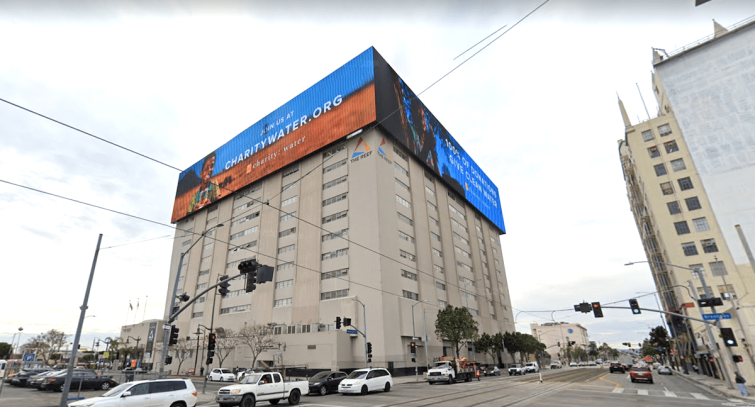 The three digital billboards wrap around the sides of the building, measuring about 55 feet by 245 feet. photo: Google Maps

The L.A. Times reported that Councilman Curren Price helped Ara Tavitian and his development firm PHR LA Mart get approval for a $1.2 billion skyscraper redevelopment in 2016, including the addition of three massive digital billboards, despite opposition from the City Planning Commission (CPC). Then three months later, companies run by Tavitian injected $75,000 into a political action committee to help Price’s reelection campaign.

Such contributions are legal so long as they are not made in exchange for an official action. But the practice has hindered public trust in the city’s approval process, and Council President Nury Martinez said restoring the public’s trust “is job one” for the city dealing with the fallout from a federal investigation that has so far led to a guilty plea from former Councilman Mitch Englander and the arrest of Councilman Jose Huizar, who is facing 34 felony counts for allegedly leading pay-for-play schemes with developers.

Against CPC’s recommendations, Price reportedly pushed to allow the digital signs to be twice as big, operate later into the night, and change images much quicker. Just last week, Planning Commissioner David Ambroz told Commercial Observer that the city should remove part of the city charter that allows council members to veto stipulations for entitlements added by CPC.

“Many of the projects that have been brought to light by the investigations have to do with projects where [that part of the charter] was exercised,” Ambroz said.

The developer of the $1.2 billion skyscraper, called the Broadway Square Los Angeles, or “the Reef,” is one of those that is allegedly involved in Huizar’s web of bribes and extortion, according to the Times. But the indictment against Huizar does not include Price or his involvement with the Reef project, and neither Price nor Tavitian have been charged or arrested.

Construction on the complex has not started, but the digital signs were added to an existing 12-story building on the site. The three billboards wrap around the sides of the building, measuring about 55 feet by 245 feet, according to the Times. The project at 1900 South Broadway also calls for the addition of 1,444 units of housing, a 208-room hotel, a grocery store and retail space. It’s located two blocks from the Grand and Washington Metro Blue Line stop.