Council President: ‘The horrendous and disgusting allegations leveled against [Huizar] and others have painted a dark cloud over our city government for a long time now.’ 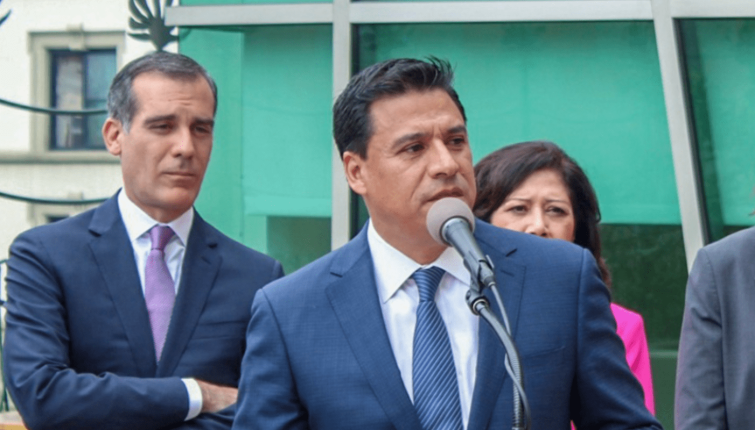 The councilman allegedly directed “a money-making criminal enterprise that shaped the development landscape in L.A.,” according to the U.S. Attorney’s Office. The pay-for-play schemes involved multiple real estate developers, illicit cash payments and political donations, more than a dozen gambling trips to places like Las Vegas and Australia, and other bribes that were given in exchange for city approval and entitlements on major or otherwise contentious projects.

Huizar is expected to appear in court in Downtown L.A. on Tuesday afternoon, according to the Department of Justice (DOJ). He was arrested at his home in Boyle Heights, and is charged with federal racketeering for using his position to solicit and accept bribes of at least $1.5 million “to enrich himself.” The charge includes bribery, honest services fraud, extortion and money laundering. Huizar faces 20 years in federal prison.

“This case pulled back the curtain on rampant corruption at [L.A.] City Hall,” said U.S. Attorney Nick Hanna, in a statement. “Councilman Huizar violated the public trust to a staggering degree, allegedly soliciting and accepting hundreds of thousands of dollars in bribes from multiple sources over many years.

“Using the power of his office to approve or stall large building projects, Huizar worked through a web of other corrupt city officials, lobbyists, consultants and developers to line his pockets and maintain his hold on Council District 14 (CD-14), which he turned into a money-making criminal enterprise.”

Paul Delacourt, the assistant director in charge of the FBI’s L.A. field office, said Huizar’s operation “sold the city to the highest bidder behind the backs of taxpayers.”

At today’s council meeting, where Huizar was registered as “absent” during roll call, city council President Nury Martinez said she will begin the process of removing Huizar from his position.

“The horrendous and disgusting allegations leveled against [Huizar] and others have painted a dark cloud over our city government for a long time now,” Martinez said in a statement sent to Commercial Observer today. “Effective today, I will begin the process of removing him from office.”

“Instead of serving the best interests of our city, Huizar chose to enrich himself,” Ryu said in a statement today. “He must be removed from city council. This scheme is disgraceful, and I hope Huizar and anyone else involved faces swift justice.”

The “CD-14 Enterprise” was created in early 2013 by Huizar and an unknown individual, according to authorities. He is, so far, the fifth and largest domino in the scheme to fall and be charged by the FBI and U.S. Attorney’s Office. The criminal complaint alleges that the members of the enterprise referred to Huizar as the “boss” and operated as a criminal organization.

Several former associates and colleagues have already been indicted or agreed to plea deals in which they admitted to participating in illegal activity. They include Huizar’s former aide, a political fundraiser, and a real estate consultant, as well as real estate developers, a CEO of a construction company, and a lobbyist.

Last month, Huizar’s former aide, George Esparza, agreed to plead guilty, and admitted to scheming to squeeze money from developers for Huizar in exchange for green-lighting their projects. He conceded that a Chinese billionaire gave him and Huizar cash and trips to Las Vegas, and other gifts as bribes, and also helped Huizar settle a sexual harassment lawsuit filed against him. The developer paid Esparza and Huizar more than $1 million to get approval for a 77-story skyscraper in Huizar’s district.

Chinese developer Shenzhen New World Group — which was among the developers named in a search warrant in the same investigation in 2019 — had proposed a 77-story tower at the Marriott in Downtown L.A. at 333 South Figueroa Street in Huizar’s district.

Appraiser and consultant Justin Jangwoo Kim pleaded guilty on June 3 to helping a developer pay a member of the city council to advance a development. He is scheduled to be sentenced on August 17. Kim was charged one week after another former Councilman Mitchell Englander was indicted for allegedly trying to cover up cash payments, a female escort, a trip to Las Vegas, and other bribes he received. Englander is scheduled to plead guilty on July 7.

Consultant George Chiang has also agreed to a plea deal that involves a separate scheme between Huizar and hotel developers. Chiang is scheduled to plead guilty on June 26, according to the DOJ.

Councilman Bob Blumenfield said given all of the “damning material that has already been released,” he doesn’t know why it took “so darn long” for Huizar to be arrested.

“The FBI and DOJ have been clear that they are still investigating any and all forms of corruption at city hall and I welcome their efforts,” he said in a statement. “We need to root out all illegal schemes and participants before we can lift the cloud of corruption and uncertainty that is making it hard for the city to function properly.”

After federal agents raided Huizar’s home and office in 2018, he was removed from the council’s Planning and Land Use Management Committee, which oversees approval discretion for the city’s largest proposed projects. The DOJ has now revealed that agents seized approximately $129,000 of cash that was stashed in his closet that day. Shortly after, Richelle Huizar ended a campaign to replace her husband after he hit term limits.

In the past few weeks, Huizar stopped attending city council meetings after colleagues called for him to step down and resign.

Ryu said justice against wrongdoers is not enough. Since he was elected in 2015, Ryu has fought to ban developer contributions to politicians, and also introduced anti-corruption legislation.

“This culture of corruption and pay-to-play politics has been allowed to fester in city hall for far too long, and I’m sick and tired of putting forth ideas that are dismissed as going too far, too fast,” Ryu said. “How many more examples do we need until something changes? We need an Inspector General with the power to oversee, investigate and subpoena councilmembers, especially over land use decisions.”

“We need changes to our city charter to remove the levers of power that city councilmembers can exploit for their own personal gain. These are just some of the reforms I have put forward, and it’s clear that they are far overdue.”

This story has been updated to include commentary from the U.S. Attorney’s Office and the FBI, as well as additional details on the criminal charges.