Sure Cure: How the City’s Walk-in Clinics Handled the Coronavirus Pandemic 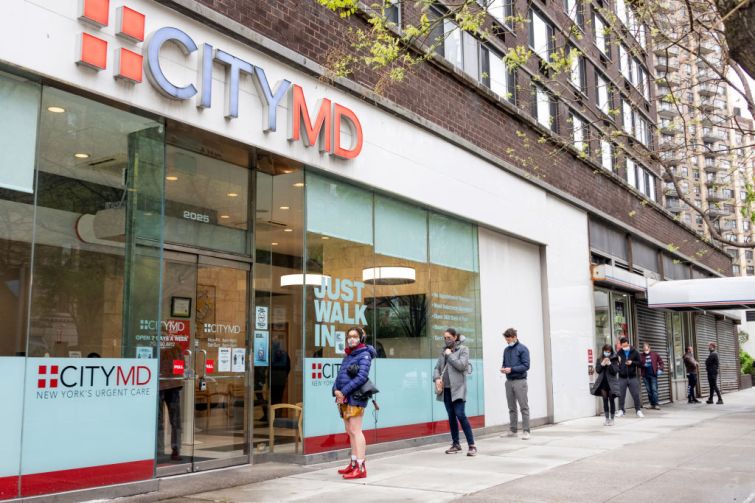 Walk-in clinics, like CityMd, shifted to become coronavirus testing centers for people who didn't want to risk a trip to the hospital. Despite this, many were not immune to the struggles many businesses faced during the pandemic. Photo: Alexi Rosenfeld/Getty Images

As the coronavirus pandemic began to take hold in New York City in March — right before the city became the epicenter of the country’s outbreak — Dr. Jake Deutsch had to make a quick pivot.

Strict stay-at-home measures implemented by Gov. Andrew Cuomo, combined with fear of catching the virus, kept many New Yorkers avoiding trips to the doctor’s office. So Deutsch shifted his two Cure Urgent Care centers in Manhattan away from its bread-and-butter of treating cuts, bruises and colds to focus mainly on COVID-19 testing and treatment.

“We saw this very clear transition from what we were doing to really be a COVID specialty center,” Deutsch, the co-founder and clinical director of Cure Urgent Care, said. “We saw plenty of people who were frontline workers, first responders and essential workers who couldn’t get testing.”

Cure Urgent Care became an early place to offer coronavirus tests around the city and in April started giving antibody tests to people to see if they already had the disease and could return to work. All told, the company tested 3,000 patients for COVID-19 and provided 5,000 antibody tests.

The center had to cut its hours, but Deutsch was able to keep his entire staff on salary and even provided bonuses to them.

“We have not closed a day since the pandemic began,” said Deutsch, who contracted coronavirus himself. “It’s been a lot of uncertainty, a lot of things that were scary but we’ve been able to maintain and keep our personnel safe.”

While doctors’ offices in the city have been forced to close or struggled to get patients through the doors, walk-in clinics have fared better by switching to focusing on coronavirus tests to help ease the burden of hospitals in the city, said Paul Wexler, the leader of the Wexler Healthcare Properties Team at The Corcoran Group.

“These clinics have been doing testing and have been accommodating patients today,” Wexler said. “They’ve had, as have individual medical officer users, put in new protocols in order to give patients a level of comfort that if they come over to their offices and their clinics, that they’re not putting them in harm’s way.”

CityMD, one of the largest players in the field, partnered with New York City in March to offer free coronavirus tests in each of its 123 locations around the city, the New York Post reported. (However, it came under fire after it mistakenly told 15,000 people in New York and New Jersey they were immune to the virus.)

But the pandemic has still been a struggle to navigate for some clinics. Dr. Richard Park, the co-founder of CityMD, previously said that the company had to temporarily shutter locations to conserve staff and supplies. Trade organization Urgent Care Association of America (UCAOA) said in April that walk-in clinics around the country on average had a 58.5 percent drop in volume compared to last year.

Still, many have seen an influx of patients coming through the door — like Cure Urgent Care — and had to quickly implement measures to keep visitors and staff safe. Those include constant sanitization of offices, limiting foot traffic going in and out of rooms, reconfiguring the waiting room to maintain social distancing and focusing on online appointments instead of walk-in visits, Wexler said.

“All health care providers are following a new set of protocols in order to give and provide safety to their patients, as well as their staff members,” he said. “Those different protocols that they’re following are, for the most part, based upon [Center for Disease Control] recommendations so that everybody can feel a little bit safer.”

Cure Urgent Care has tried to avoid using its waiting room altogether and instead immediately ushers patients to a private room once they arrive, Deutsch said. It encourages online registration, instead of just walk-ins, and very rarely had to resort to forming a line outside its centers so that people can stay safe.

Urgent care centers have been on the rise around the country since the Affordable Care Act was passed in 2010. The bill provided insurance to millions of people while increasing deductibles for hospital visits, making walk-in clinics a cheaper option for many patients, Michael Stoler, the president of New York Real Estate TV who’s an overseer for NYU Langone Medical Center, previously told Commercial Observer.

The country has a total of 9,616 urgent care centers as of November 2019, which increased by 9.6 percent compared to the same time last year, according to a report from UCAOA. It’s more difficult to track how many are in New York City, since UCAOA didn’t specify by state, and the most recent data comes from a 2017 United Hospital Fund study, which found there was 103 in the city. (CityMD currently has more than that alone.)

While the pandemic has caused people looking to get coronavirus tests to walk through some urgent care centers’ doors, it got other patients more comfortable with telemedicine which could spell trouble for the centers, Wexler said.

“Patients can get what they need very often without coming into their office,” Wexler said. “[Urgent care centers are] definitely shaking in their boots about it.”

All that means is it’s unlikely there will be a rush in leasing activity from urgent care centers in the near future, Wexler said.

“It put all of their real estate deals on hold because they’re in triage mode with having to handle this influx of COVID patients,” he said.

Wexler said it will be a slow return in leasing activity for urgent care centers, — which typically take 2,000 to 5,000 square foot spaces — but he added it was unlikely they would shutter any existing locations.

But not everybody is pumping the breaks on new centers. Deutsch said his company focuses on underserved communities and the pandemic has shown the best place to target for a third location.

“We are looking to expand, that is our first action of business,” he said, adding the company is eyeing spaces above 96th Street in Manhattan. “We heard from our patients in other areas that there is a desire and a need.”