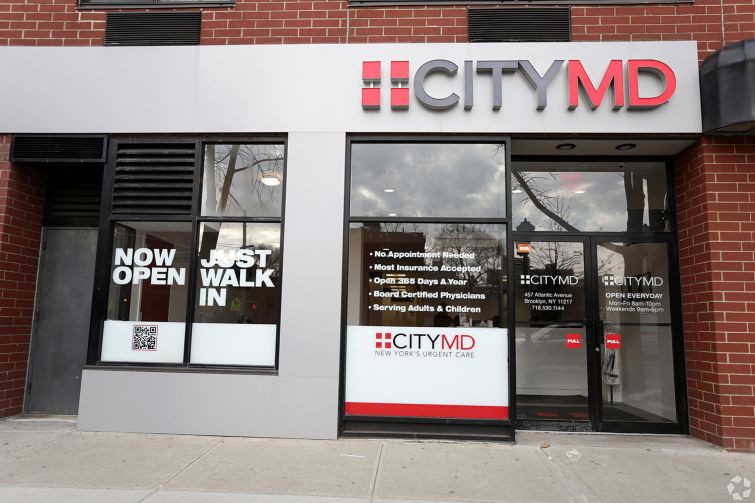 For over 13 years spent treating patients in hospital emergency rooms, Dr. Jake Deutsch noticed a sizable gap in the quality of patient care between the treatment of serious, even life-threatening, illnesses and injuries, and that of less severe but still serious issues.

“People go to the hospital when they have a problem and they’re not dying,” said Deutsch, “and they get marginalized because it’s not a heart attack or stroke. But they’re still stick and inconvenienced, still missing work.”

His solution was to open—along with partner Elan Katz, the chief executive of the Quick Rx Pharmacy Chain, Cure Urgent Care—a chain of urgent care centers that now has three locations in New York City, designed to treat patients in a faster and kinder fashion.

“We really wanted to tap into that missing gap for health care for episodic illness and take my expertise in emergency medicine and be able to make it an efficient, modern and pleasant experience,” Deutsch said. “If you look at our logo, it’s a cross with a smile—the idea is that being sick shouldn’t be painful. You already feel bad. You shouldn’t have to suffer more just because you’re now seeking treatment for it.”

The rapidly evolving urgent care center industry is changing the nature of health care. The centers, many of which accept most types of insurance, are designed for quick treatment of illnesses or injuries not serious enough for the emergency room (or not worth the time, money and aggravation spent there) but still requiring a doctor. Urgent care centers treat broken bones, the flu and similar ailments at a fraction of the cost and time that hospital emergency rooms do.

According to a 2015 survey by the Urgent Care Association of America (UCAOA), the country’s nearly 7,100 urgent care centers see 3 million patients a week and more than 160 million annually and report the average cost of a visit at $150, compared with over $1,300 for a similar trip to the emergency room. The organization also reported that 90 percent of urgent care centers offer patient wait times of 30 minutes or less—compared with four hours for emergency rooms—and that 84 percent of visits total one hour or less.

The association noted that “up to 27 percent of all ER visits could take place at an urgent care center or retail clinic, generating potential cost savings of approximately $4.4 billion annually.” This savings is to the care providers (both procedures and services done in ERs are typical much more expensive than in a doctor’s office or walk-in clinic), the insurance companies and to the patients.

The growth of these centers could mark a seismic shift in the nature of American health care, with several real estate pros referring to it as “the retailization of health care,” and noting that the centers’ growth reflects recent overall changes in the national health care landscape.

“Health care in years past was a provider-centric system, so everything revolved around what worked best for the provider,” said Paul Wexler, the leader of the Wexler Healthcare Properties Team at The Corcoran Group.

“In today’s medicine, it’s about what’s best for the patient. So in this new patient-centric system, everything being done in medicine is being done to revolve around convenience and ease for patients, whether it’s access to the location, speed of the delivery of the services provided, or a combination of those things. In this lifestyle we’re in, with information access and the 1-2-3 pace everyone’s moving at, the urgent care center plays right into that.”

Urgent care centers are catching on in part due to the need to curb steadily rising health care costs, including increased deductibles caused by the Affordable Care Act (ACA).

“Urgent care is very big partially due to Obamacare, because of the high deductibles that people have to go to a hospital emergency room,” said Michael Stoler, a managing director at Madison Realty Capital as well as an overseer for the NYU Langone Medical Center and the founder and CEO of the Foundation for Medical Evaluation and Early Detection.

Indeed, one of the positive sides of the ACA—the millions of people who have health insurance who previously hadn’t—is also contributing to the urgent care industry’s rise.

“There are a large number of patients who before this, went to the emergency room to access doctors and receive medical care,” Wexler said. “Those people now have insurance. So there’s a large patient population that will go to these urgent care centers because the individual physicians within the centers take insurance. So that’s now more accessible to a large new patient population.”

While urgent care centers are affordable for all, they are especially in sync with the needs of millennials. The UCAOA reports that while baby boomers are most concerned with the qualifications of their doctors, millennials are more likely to prioritize convenience and cost.

From a location standpoint, urgent care centers have more in common with clothing stores than with hospitals or doctors’ offices. When seeking out new locations, visibility, traffic and street-level accessibility are key.

“The basic model is ground-floor retail,” said Deutsch, whose company currently has one location each on the Upper East at 175 East 96th Street and the Upper West at 2689 Broadway, as well as one in Huntington, Long Island.

“It depends on the area, but [we generally need] between 2,500 to 4,000 square feet,” Deutsch said. “Since we’re a seven-day-a-week operation, we’re usually looking for more residential areas, but that’s [flexible]. What’s really important is visibility. We’re always comparing the trade-off of high visibility and high rent versus being a little less visible, but with better costs over the long term. That’s the tricky part of deciding on a location for us.” (The New York City clinics are open 364 days a year, from 8 a.m. to 8 p.m. during the week, and 9 a.m. to 8 p.m. on weekends.)

“[Urgent care is] growing by leaps and bounds,” Stoler said. “They’re becoming one of the bigger [renters of] retail space in the city of New York, and around the nation.”

Given the industry’s growth and its retail nature, it’s little surprise that in New York City, competing companies often set up shop within blocks of each other.

The urgent care companies with two of the largest New York City footprints (GoHealth with 13 clinics in the city and CityMD with 38, according to their respective websites) have clinics one or two blocks apart in several instances. The former has one on Amsterdam Avenue and West 69th Street, and another on West 23rd Street between Seventh and Eighth Avenues; the latter, one on Broadway at West 69th Street, and another at West 23rd Street between Fifth Avenue and Avenue of the Americas. There’s also an Upper West Side cluster further up on Broadway: CityMD on West 104th Street, Cure by West 102nd Street and GoHealth on West 100th Street. (Neither CityMD nor GoHealth responded to requests for comment for this article.)

Urgent care clinics seem poised to become the city’s newest version of the rivalry between Starbucks and Dunkin’ Donuts, or the many banks and drug stores positioned within feet of each other throughout the city.

“They’re like Starbucks. They want to be in the neighborhoods where people live and work,” Stoler said. “Go down 86th Street on the East Side, you’ll see a couple of them. On 48th Street and Second Avenue, there was a nonchain urgent care center, and CityMD opened a block away. It’s a location thing.”

Peter Schubert, a partner and the managing director of commercial leasing at TerraCRG, notes that urgent care centers are an exciting addition to the city’s health care landscape due to above average wait times at New York doctors’ offices.

“We have the most pain [in that area],” Schubert said. “If you ask the typical New Yorker about their wait time even when they have an appointment, they’re waiting a very long time—30, 40 minutes before they see the physician. I’m from the West Coast, and my experience with doctors there is much better than in New York. The pain point for people is that nobody wants to wait. Nobody has that time. It’s a much faster process [at these clinics] to get in and out.”

Several people also pointed out that urgent care centers can be advantageous to city landlords, as it’s hard to imagine a more stable and desired tenant.

“When you talk about stability, we’re looking for long-term leases, and health care is always going to be in demand,” Deutsch said. “Restaurants can be tremendously popular but only last a few years. We look at it as a great incentive for people, especially in large buildings, like condo buildings, because you sort of have in-house medical care. It’s like if a Whole Foods opens in your building—you hit the jackpot.”

While some urgent care centers are established by doctors like Deutsch, others are owned by hospital systems seeking other ways to attract and serve patients.

The UCAOA reported in the previous study mentioned that 22 percent of urgent care centers nationwide are currently hospital-owned, while 15 are in a joint venture with a hospital. As of last summer, that included Cure, which partnered with the Mount Sinai Health System for an Upper East Side location.

“That’s been a big feather in our cap,” said Deutsch, who is currently scouting two locations for Cure centers to open in 2017. (Deutsch noted that the company is aiming to have 10 clinics up and running by 2020.)

“They have a great reputation in New York, and [this helps us provide] great patient care and customer service, to keep people coming back over and over,” Deutsch said.

“Everybody is trying to expand their patient catchment area, so the overall idea of having these freestanding centers located in these premier retail locations allows the individual operators to cast their net out and bring patients in,” Wexler said. “And for the bigger systems, it allows them one more method to drive additional patient flow and business back to these main campuses. It hits on a number of different cylinders in terms of being a useful vehicle for the delivery of health care.”

Prospects for the industry’s continued expansion are encouraging. The UCAOA found that 87 percent of urgent care companies acquired or built a new location in 2014, and 89 percent reported an increase in the number of patient visits in 2015. With 34 million Americans expected to receive insurance under the ACA by 2019, these numbers are only expected to grow.

“I think this is the beginning,” Schubert said. “I think many more services will be added to what’s currently offered, and as people are more comfortable going to these locations, we’ll be going to more and more of these kinds of clinics and retail settings for services that were typically done in hospitals. We as consumers are going to go where it’s easiest, and that’s ultimately what’s driving the industry.”