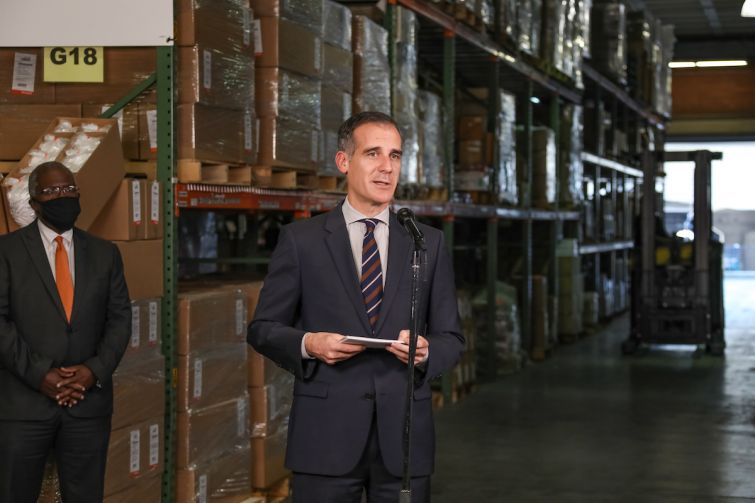 Controller Ron Galperin released a study Thursday showing that more than 300,000 people lost their jobs in the city of Los Angeles since the coronavirus pandemic hit in March.

Hospitality and retail suffered the largest declines since shelter-in-place orders were enacted. According to the report, accommodation and food services lost nearly 69,700 jobs; the retail industry lost 32,650 jobs; healthcare lost more than 27,200 jobs; and the information sector lost nearly 19,500 jobs.

Among other industries in L.A., the arts, entertainment and recreation sector lost more than 14,000 jobs; the construction industry lost 7,940 jobs; transportation and warehousing lost about 4,560 jobs; real estate and leasing lost approximately 690 jobs; and the finance and insurance industry lost about 550 jobs.

L.A. County as a whole lost an estimated 685,000 jobs over the last two months, including the largest month-over-month downturn in recent history. For comparison, the next biggest decline for the county was during the height of the Great Recession when 127,900 jobs were lost in January 2009.

Unemployment hit historic levels throughout the country after government officials widely restricted people to their homes to slow the spread of the virus, creating a severe threat to local and national economies. Mayor Eric Garcetti has warned it will take a long time to recover from the impacts of the shutdowns.

With 20.3 percent of Angelenos unemployed, the city has a larger rate than California at 15.5 percent, and the rest of the country at 14.7 percent.

“America lost a staggering 20.5 million jobs in April, including hundreds of thousands in the city of L.A. — something we haven’t seen since the Great Depression,” Galperin said in a prepared statement.

As of Thursday, the L.A. County Department of Public Health has identified 59,650 positive cases of coronavirus, and 2,531 deaths.

Galperin’s report also found that many of the neighborhoods in L.A. that have been most-impacted by the economic shutdowns are areas with higher concentrations of African-American and Latino families, as well as areas with more immigrants, low-income renters and single-parent households.

“The pandemic has amplified the devastation felt by low-income neighborhoods and communities of color, highlighting just how much economic injustice truly exists in our city,” Galperin added. “It is my hope that understanding which neighborhoods are most impacted will help city leaders pinpoint areas of L.A. that need additional resources to recover from the fallout of COVID-19.”

An estimated 17,000 jobs were lost in the North Hollywood neighborhood in L.A.’s San Fernando Valley. St. Elmo Village in the Mid-City area saw the highest percentage of job losses with 18 percent of residents losing work. Approximately 28 percent of residents there worked in accommodation and food services, 13 percent in retail, and 6 percent in healthcare.

The other enclaves that saw the largest drops in employment were Pico-Union, Westlake, Harvard Heights, and the South L.A. region.