The northern Los Angeles neighborhood has emerged as a major live-work-play submarket … but can it survive the boom? 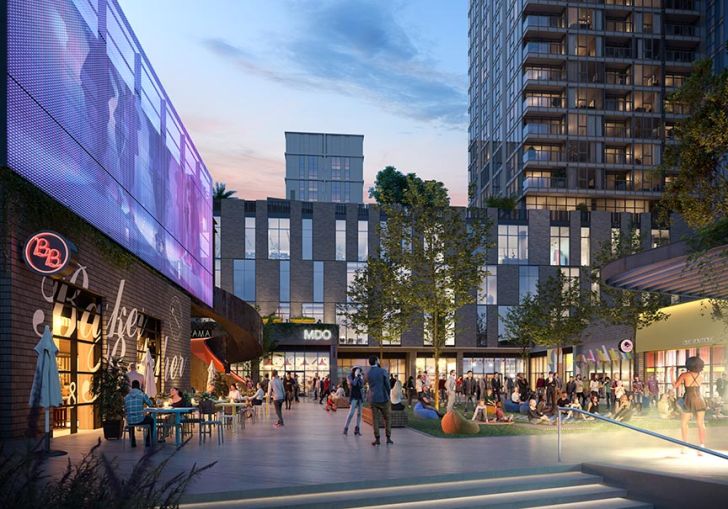 The starting point was just south of the development, on the rear patio at the historic Lankershim Depot building at 11275 Chandler Boulevard. Today, it’s a Groundwork Coffee, catering to an ethnically diverse population on a busy corner of North Hollywood. The building, which once housed the Pacific Electric Red Car line, sat dormant for 30 years until its recent resurrection. With new apartments rising nearby and a bustling street-life scene, it was an apt setting to absorb the plans Trammell Crow has for District NoHo — and for North Hollywood itself.

Contrary to its name, North Hollywood is not contiguous with Hollywood and is located in East San Fernando Valley, just east of the 170 freeway and north of the 134 freeway. It’s long been known as a nondescript area that housed the Academy of Television Arts and Sciences, and borders places like Sun Valley, Burbank, Toluca Lake and Studio City.

But recently, North Hollywood has become an all-important, millennial workforce-courting hub. With 40,000-square-feet of the We Company’s WeWork NoHo space at Lankershim and Magnolia Boulevards unfurling this fall; a savvy community branded the Noho Arts District; and quirky, colorful eateries such as Kahuna Tiki, Urban Kebab and Republic of Pie dotting Magnolia Boulevard, North Hollywood has become a hip, quasi-bohemian destination.

In December, El Segundo-based Trammell Crow and partner MetLife officially submitted plans to the city of Los Angeles, topping off nearly four years of complex planning for a public-private partnership with the LA County Metropolitan Transportation Authority. If approved, the transit-centric mixed-use project will breathe new life into the North Hollywood Metro station portal at Lankershim Boulevard and South Chandler, a major junction in the area.

“We are enthusiastic about the growth, especially of the entertainment industries located in and around the eastern San Fernando Valley, with District NoHo as the anchor of the creative community,” said Ehman, who serves as a vice president at Trammell. “The project is representative of the way Los Angeles County will grow — access to transit, community open space, quality jobs, experiential retail, and a dense residential community that includes affordable housing. Our vision for the project is an urban village in the Valley, rooted in transit, and infused with art and culture.”

The hope, Ehman and Cox explained, is that most of the tenants occupying the 1,200 market-rate apartments will be entertainment or tech professionals; if they are not working at the local North Hollywood overage of various media companies, they will be commuting by Metro to nearby media and tech hubs in Burbank, Studio City, Hollywood and Downtown L.A.

“Over the next several years, the San Fernando Valley will continue as a highly desirable location to live, work and play, with the North Hollywood Transit Center at the epicenter of the growth,” Cox, a senior managing director of Trammell’s housing arm High Street Residential, said. “When it opens in 2023, the project will bring a diverse offering of residential, office, retail and affordable housing to North Hollywood.”

Construction is set to kick off late next year, with the project opening across six phases, and the work is expected to take six to eight years to complete.

Trammell Crow purposefully hired three different design firms — master architect HKS, plus KFA and Gensler — in order to ensure that the sum of its live-work-play parts did not appear to be “drawn by the same hand,” as Ehman phrased it.

HKS and KFA have designed the residential buildings, and by agreement, the affordable housing must go up first before any commercial buildings go online. Meanwhile, Gensler has designed the 10-story, 400,000-square-foot office tower that will be “laminated with retail shops,” as Cox, put it.

“North Hollywood has been overlooked for a long time,” added architect Greg Verabian, an associate principal at HKS’ Westwood office, who grew up in nearby Studio City and calls this addition to NoHo “transformative.”

“I drank the Kool-Aid of transit transforming neighborhoods,” Verabian said. “It’s a mechanism that can help a neighborhood evolve.”

Trammell Crow and MetLife’s proposed redux of the Metro station represents a $1 billion investment in North Hollywood, and the developers are not the only ones gambling on the East San Fernando Valley neighborhood. They have worked their District NoHo plan around the historic train depot building occupied by Groundwork Coffee as well as a 127-unit multifamily structure that Richman Group is currently constructing behind it.

Meanwhile, the developers of NoHo West, an ambitious 170 freeway-adjacent mixed-use project, are racing to open in 2020. When finished, the 25-acre complex at 6150 Laurel Canyon Boulevard, located in the most eastern part of the San Fernando Valley, will encompass 642 apartments, 230,000 square feet of office, and 300,000 square feet of retail with 60 dining and shopping sites, including a Trader Joe’s, Regal Cinemas and 24-Hour Fitness.

NoHo West’s developers, Los Angeles-based GPI Cos. and Lake Forest, Calif.-based Merlone Geier Partners, have anchored the property’s commercial side with office space carved out of the bones of a longtime Macy’s department store. Key tenants shoring up the retail component include Urbane Café, The Stand, California Fish Grill and Ulta Beauty. The property will also feature green space, water fountains, a dog-friendly park and playgrounds.

Construction began in 2018 on NoHo West, which will usurp the erstwhile Laurel Plaza space. Designed by DTLA-headquartered Stir Architecture with design work by Orange County-rooted Architects Orange, the complex will inject some modernity into the largely refurbished-looking community, with signage facing the 170.

“This is beyond live-work-play,” said Patrick Church of JLL, who’s been helping to handle the office leasing at NoHo West. “Now the flavor is having a project that has a whole community feeling to it.”

Church, along with his JLL colleague, oversees 22 buildings and 6 million square feet of office space from Pasadena to NoHo. Of all of their assignments, Church said that this multi-faceted, multi-genre complex has been the most ambitious they have undertaken. The office specialist, who recently firmed up WeWork’s floors at nearby 5161 North Lankershim Boulevard, said he believes NoHo West will benefit from the nearby NoHo Arts District, which he said has boomed “really over the last 10 years.”

Church recently led CO on a hard-hat tour of the former Macy’s structure, which rises four full floors [five counting mezzanine level). He said he expects to land either four tenants or a single tenant for the entire 230,000-square-foot building.

“More than likely it’s going to be all entertainment,” he said.

NoHo West is just the latest project to capitalize on the NoHo renaissance. The neighborhood is currently dotted with mixed-use plans in development, from the Richman Group’s project — which will deliver 127 apartments and 12,000 square feet of retail near Metro’s North Hollywood Station next year — to more compact projects like Warmington Residential’s Cue NoHo, a set of 20 single-family residences at 10907 Otsego Street.

Yet for the community of North Hollywood, NoHo West represents the culmination of a community that has transformed in only a few short years from an invisible suburb to serious business.

In early 2019, Hollywood-based Titmouse Animation expanded into NoHo as they assumed some 25,000 square feet at 5200 Lankershim Boulevard and 4640 Magnolia Boulevard.

“The rents they signed are close to Burbank Media District [rents],” said Nico Vilgiate of Colliers International, who negotiated the expansion. As of the third quarter of 2019, Burbank office space rents for $3.59 per square foot, according to Colliers data.

That’s because the Hollywood-heavy Burbank submarket is tapped out.

“Burbank [Media District] is close to single-digit vacancy,” Vilgiate said. “That Hollywood trend has been going on for a while, for the last six years. There’s hardly any space left in the Media District.”

“Suffice it to say, content continues to grow,” Vilgiate continued, alluding to a slew of oncoming subscription streaming services, including Disney’s launch last November and WarnerMedia’s in early 2020. “I believe Disney took the place almost as a defensive measure, for future employees as they consolidate the workforce from their acquisition of Fox,” he added.

In September, ITV Entertainment announced a high-profile leap from offices at Sherman Oaks Galleria to 5250 Lankershim in North Hollywood. Taking over space currently filled by Kaiser Permanente, ITV signed a 10-year lease for 42,000 square feet and expects to relocate in May. Its fellow tenants will include Bento Box animation studio, Tremendous Entertainment and Sada Systems.

“North Hollywood was what I called the backlot of Hollywood,” said Glendale-based Colliers International Senior Executive Vice President Gregory K. Barsamian, whose expertise lies in the industrial sector. “Proximity is a big issue because the studios are nearby. It was affordable, it was close to the studios. It’s been the nucleus of the industry.”

Since 2018, NoHo is seeing an influx of cannabis producers moving into industrial buildings, post-legalization of marijuana.

But for all of its submarket heat, the community’s industrial product is rarely top tier.

“From an industrial perspective, there’s nothing special or pretty (in North Hollywood), it’s a nondescript Steady Eddie,” Barsamian said, adding that its warehouses often have “terrible parking, the loading sucks.”

While not Class A material, NoHo warehouse space has attracted “people running companies out of their bedrooms and their garages needing to grow,” he said.

In general across the Valley, where warehouses are being converted into piecemeal soundstages to feed the content frenzy for streamers such as Netflix and Disney Plus, the supply of straight industrial space has been “frustratingly low,” Barsamian said.

What needs to happen in NoHo, Barsamian continued, is what culminated last year in nearby Sun Valley, when Xebec re-developed a former landfill into two mammoth, state-of-the-art warehouse facilities, one of which is occupied by Amazon distribution-enabler OnTrac. That was a case of taking “land that wasn’t buildable in the past and figure out what the cost is to make it buildable,” Barsamian said.

That strategy was also seen at 11200 Peoria Street, where Penske Truck Rental created a building “sitting on pylons like a freeway overpass [with gravel in-fill],” he said.