‘There’s No Way to Sugarcoat This,’ Road to Recovery Will Be Long for California

Los Angeles Mayor Eric Garcetti warned that California will take a long time to recover from the impacts of the coronavirus. 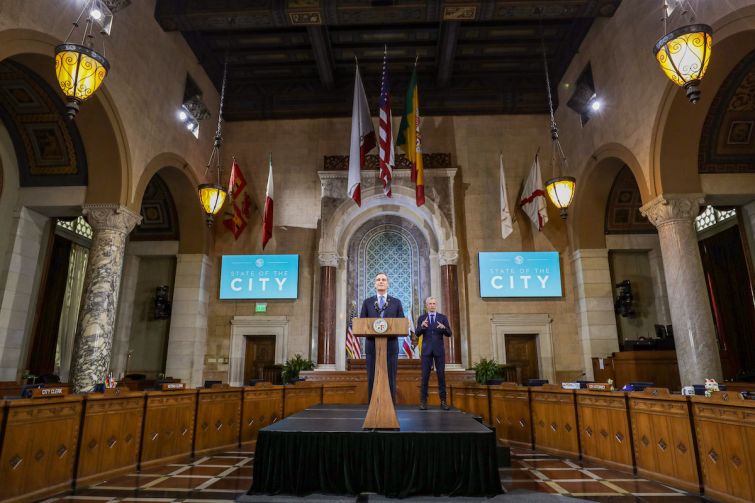 Southern California and state officials are assessing the damage and preparing for a “new normal” as they begin to formulate plans to phase in the economy.

On Sunday, L.A. Mayor Eric Garcetti said “our city is under attack” and that “daily life is unrecognizable” in his State of the City speech. He said revenues have “plummeted” and hotel reservations have “collapsed.”

“All of us remember the 2008 recession. Until now, it was the biggest economic blow of our lifetime, and it hurt,” Garcetti said. “But there’s no way to sugarcoat this. This is bigger, and it will hurt more.

“After 9/11, our airport closed for two-and-a-half days, passenger traffic fell by as much as a third that month, and it took ten years to claw our way back. Today, airport passenger traffic is down 95 percent. From a fiscal perspective, this is the worst it’s ever been.”

Garcetti’s speech capped another solemn week in Southern California, where stay-at-home mandates have been extended to at least May 15. Governor Gavin Newsom announced on April 17 that more than 3.1 million Californians filed for unemployment just since March 12, ending 120 consecutive months of job growth in the state. And USC Dornsife Center released a survey that found less than half of Los Angeles County residents are still currently employed, the L.A. Times reported.

As of Monday, there have been more than 13,800 cases of coronavirus in L.A. County, and more than 600 deaths. And although officials said social distancing has been effective, Garcetti expects L.A. to “almost certainly” see a second wave, and that there might not be large events allowed in L.A. until at least next year.

Garcetti also announced that many city departments will have to “operate at sharply reduced strength.” He said city employees will take 26 furlough days over the course of the next fiscal year — equivalent to a ten percent reduction in pay.

Controller Ron Galperin last week also predicted a $231-million decline in revenue from his previous estimate for this fiscal year, and as much as a $598-million decline for next fiscal year. Galperin said travel and tourism revenue will fall by 70 percent in the next couple months, and that Transient Occupancy Tax will drop by $61 million this fiscal year and up to $80 million in 2021.

But Garcetti also proposed the CARES Corps — a federally funded coalition of government and health agencies, medical professionals and businesses — to combat coronavirus and accelerate the economic recovery, and provide small businesses with assistance.

“Let me be clear: we cannot stay indoors for six or seven months without risking an even greater economic catastrophe,” he said Sunday.

“We’re also going to have to accept lasting changes and new realities in our daily lives, new rules of the road for our workplaces, our schools, our train stations and airports and malls,” he said. “And I want to be clear: it won’t all happen at once. Going back out won’t be like flipping a single switch in a single moment.”

Speaking from a state level, Governor Newsom on Friday said that the economic consequences of coronavirus are now just coming into sharper focus. While dealing with the pandemic, he said they are simultaneously beginning to focus more robustly and comprehensively on economic recovery.

He announced the formation of the State Task Force on Business & Job Recovery to put together a strategy, including actions for governments and businesses, to help California recover as fast as safely possible from the “pandemic-induced recession.” Newsom called it “a roadmap to recovery,” predicated on health, data, and science.

“Health and safety remain the most important points here, and we will ensure that they remain that way by staying within the government’s framework for opening up the economy,” Newsom said in a daily video conference.

“We have great confidence in our capacity to — in a California way — to not just survive working our way through this pandemic, but to thrive as we turn this economy around,” Newsom said.

In the video conference with Newsom, Steyer said health and safety have to be paramount, “but everyone is also hurting economically.” Reses said coronavirus has already dramatically affected small businesses across the state.

“The worst-hit industries are those that rely on foot traffic — health and beauty, restaurants, retail,” she said. “Businesses have laid off staff and they’ve ceased operations and a typical small business has only 30-days of cash on hand.”

Newsom said he recognizes “some of the exuberance” people have in advancing the recovery and reopening sectors of the economy, and the desire to “attach dates and deadlines to those strategies.” But, for now, he said the state needs to continue to practice social distancing, and he did not give a precise timeline for modifying the stay-at-home order.

“The worst mistake we can make after so much progress in the state of California … is to pull back right before we’re at a point where we can start toggling back, and begin a very thoughtful phased-in approach to reopening,” he said.

Newsom gave six indicators that will serve as the framework for the state to consider before modifying the stay-at-home orders, and some sectors would be phased in slower than others. For example, restaurants will have fewer tables and classrooms will be reconfigured.

“As we contemplate reopening parts of our state … we must understand that things will look different than before,” he said.

The indicators include the ability to determine when to reinstitute certain measures, such as the stay-at-home orders, if necessary; the ability to monitor testing; contact tracing; and the ability of hospitals and health systems to handle surges.