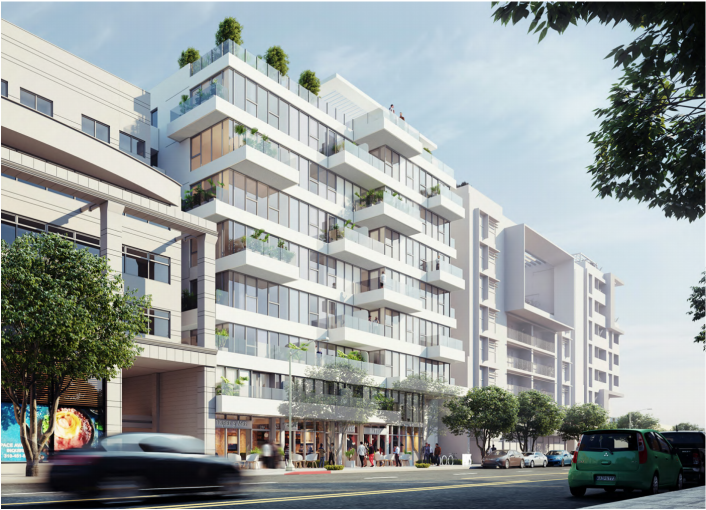 The eight-story project at 1415 5th Street in Santa Monica will include 93 micro units and 41 residential units. rendering: KFA Architects

Mixed-use developer WS Communities is moving forward with new designs for two of its multifamily projects in downtown Santa Monica.

The city’s architectural review board this week approved updated plans for the two projects with almost 200 total units — about 70 percent of which are “micro-units,” which are smaller than 375 square feet. The developments set for 1437 and 1415 5th Street are part of at least ten mixed-use projects the firm has in the pipeline in Santa Monica.

The eight-story project at 1415 5th Street will span nearly 60,000 square feet with 93 micro-units and 41 residential units. The project also calls for approximately 2,500 square feet of ground-floor commercial space and four levels of subterranean parking with more than 100 spaces. The development would replace two existing two-story commercial buildings on the lot.

The project at 1437 5th Street is between Santa Monica Boulevard and Broadway Avenue. It will include just under 30,000 square feet of space with 63 total units — 46 of which are micro-units.

Both projects were initially presented in December, when the review board suggested improvements to the designs, and WS Communities has “substantially revised the project design,” according to a staff report. KFA Architecture designed the projects.

In March, New York-based Madison Realty Capital provided $157 million in construction financing to WS Communities to build ten projects with nearly 850 units in Santa Monica, including the two discussed this week, according to media reports.

The two projects are part of the six proposed last year by WS Communities in Santa Monica that included about 360 micro-units in a four-block radius. The proposals spurred a temporary ban on such units in the city this time last year, which nearly started a legal battle.

Last June, the city and WS Communities reached an agreement to complete the properties after the firm threatened to file a lawsuit, according to media reports from last summer. The agreement stipulates that the units be at least 220 square feet, not including the closet and bathroom, and that 15 percent of the units be designated as affordable. They also must be primary residences, and not for short-term stays, and WS will not be able to build any more micro-apartments in Santa Monica.

WS Communities is an extension of prominent Santa Monica developer NMS Properties, run by Neil Shekhter. WS is run by CEO Scott Walter, who was previously an executive at NMS Properties.