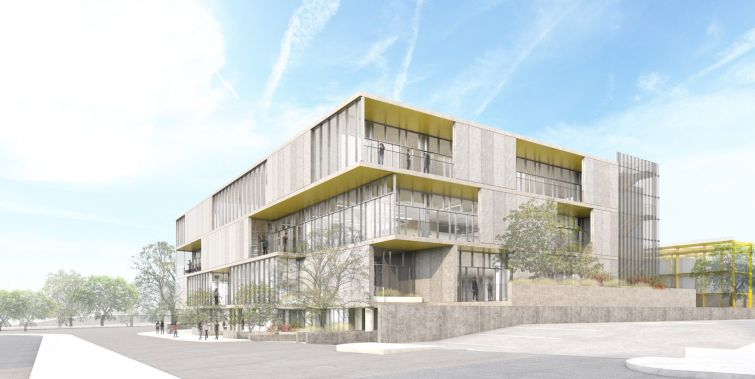 Urban Offerings and Meridian Group have secured $59.3 million in non-recourse construction financing for the development of a four-story creative office building on Los Angeles’ Westside.

The loan was provided by UBS Realty Investors, property records show. The financing was arranged by Dekel Capital.

Proceeds will be used for the demolition of an existing structure at 5950 Jefferson Boulevard, and the construction of a 74,055-square-foot Class A creative office building. The project, which will include almost 5,600 square feet of ground-level retail and 175 parking spaces, is expected to be completed by June 2021.

The site is just outside of Culver City, which has seen a mass influx of media and tech tenants demanding modern office space. The project is near the Metro Expo Line at La Cienega Boulevard, and adjacent to the Hayden Tract district that is home to several startups and tech firms.

Vacancies on L.A. County’s Westside are on the decline, dropping to 9.3 percent in the final quarter of 2019, compared to 13.9 percent throughout Greater L.A., according to CBRE. The firm also reported that 27 percent of the inventory on the Westside is occupied by technology and media firms. The submarket also led the region with 311,360 square feet of net absorption in that quarter.

Adjacent to the Jefferson Boulevard property, Clarion Partners and Lincoln Property Company acquired a fully leased creative office portfolio for $169 million last month. Both properties are about one mile from the 128,000-square-foot Washington Boulevard project that is pre-leased to Apple, and about 1.5 miles from the Westside Jefferson Business Park that Redcar Properties purchased for $73.5 million in December.

Urban Offerings was founded in 2005 and has been focused on adaptive reuse and new construction projects. The firm’s portfolio currently includes more than $200 million in creative office, multifamily and retail under development. Urban Offerings is also working on a few redevelopment projects in Downtown L.A., including one with more than 230,000 square feet of office space in the Arts District.

The development is the eighth joint venture between Urban Offerings and Meridian Group.