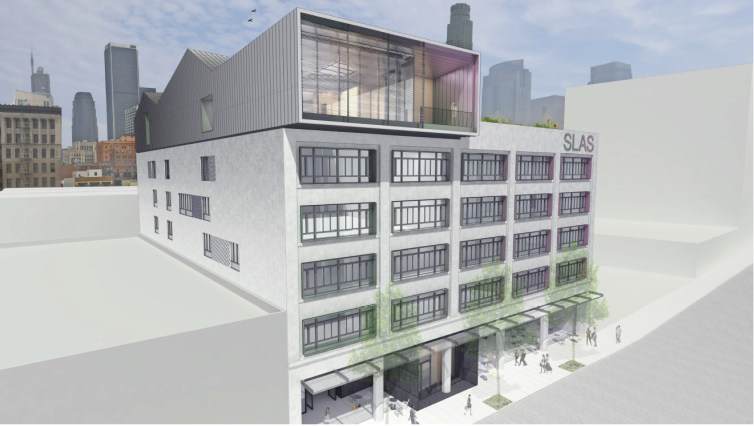 A rendering of the Norton building following its conversion to office space. Image: Dekel Capital

The ownership team of Urban Offerings and ESI Ventures has secured $122 million in financing on a pair of adjacent Los Angeles buildings it will convert to office space, according to an announcement from Dekel Capital, which arranged the financing for the owners.

The financing, a mixture of $80 million in short-term bridge debt and $42 million in junior equity, was also arranged by George Smith Partners, an LA-based real estate investments firm. ESI and Urban Offerings will put the capital influx to two purposes, Dekel said.

First, the group will refinance its stake in the Norton Building at 755 South Los Angeles Street, a site that the team acquired in September 2016 for $17.6 million. The five-story warehouse building, built in 1906, had most recently served as home to a variety of garment and manufacturing firms. Renovations are already underway to create about 60,000 square feet of office space at the site, following a design by Los Angeles-based architects Omgivning.

Second, the ownership group will use the proceeds to acquire and renovate another building at 700 South Main Street on the same block as the Norton. The building, which also dates to the first decade of the 20th century, has hosted a Dearden’s department store since it was built.

When Ronny Bensimon—the owner of Dearden’s—and his family decided to sell the site last summer, ESI and Urban Offerings jumped at the chance to consolidate their office investment on the block, according to Shlomi Ronen, the managing principal at Dekel.

The team “didn’t want to have a competitor property a block away,” Ronen said.

That arrangement made it easy to secure additional financing.

“The ownership team was the same, so [the lender] was open to including the Norton building as part of the overall capitalization,” Ronen said.

Neither ESI nor Urban Offerings responded to inquiries about the purchase price, but brokers who spoke to the Los Angeles Business Journal, when the Dearden’s property went on the market last year, estimated its value at around $50 million.

A spokeswoman for Dekel declined to identify the lender and equity partner.

“It’s very much transit oriented,” Ronen said. The building are “two blocks away from the Seventh Street metro station, which is one of the hubs of the whole system. There’s also a small bus system that travels within downtown [with a] stop right in front of the buildings.”

The leader of George Smith’s team for the deal, Malcolm Davies, emphasized the importance to the city of the neighborhood’s transformation from a warehouse district to a creative-office destination.

The Fashion District, located in the sprawling metropolis’ urban core, “is truly going through a modern-day renaissance,” Davies said in a statement. “The area is attracting the energy and momentum that initially brought the earliest of settlers to the city of Los Angeles.”

Ronen said that the Norton building should be set for leasing by January 2019 with space ready for tenants in the Dearden’s building about six months later.

Update: This article was updated to reflect that George Smith worked with Dekel to arrange the financing and was not a source of the financing.