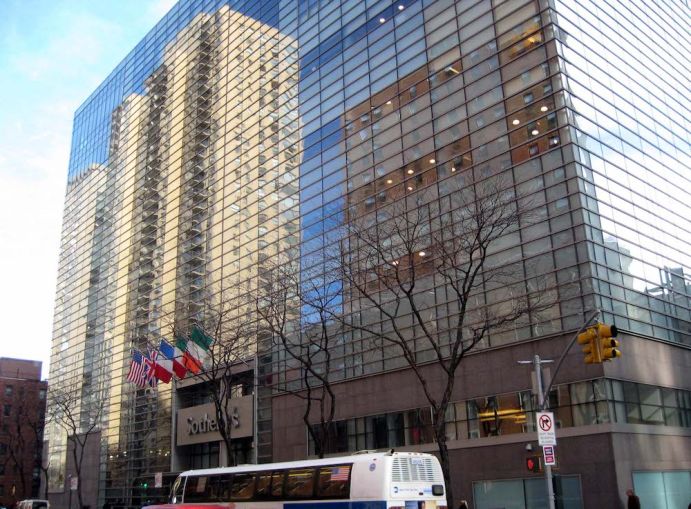 Barclays Capital has officially signed up to provide a $650 million whole loan on Sotheby’s headquarters at 1334 York Avenue, sources close to the transaction told Commercial Observer.

Commercial Mortgage Alert first reported that the auction house was in the market for the floating-rate financing, which will be used to retire existing debt, cover closing costs and repatriate equity.

CMA reported that Newmark Knight Frank is handling the debt assignment, and lenders familiar with the financing request said that Dustin Stolly and Jordan Roeschlaub are leading it. Officials at the brokerage declined to comment.

The 506,074-square-foot property, between 71st and 72nd Streets, has served as the global auction house’s headquarters since 1980 and is also home to its sole North American salesroom. The property also includes an art gallery and ground-floor retail, occupied by Sotheby’s Wine and Sant Ambroseus Coffee Bar.

In 2000, the building underwent a full-scale redevelopment. Six stories were added — elevating the structure’s height to 10 floors — and its interior was gut-renovated. Three years later, Sotheby’s entered into a sale-leaseback agreement with then-owner RFR Holding, before eventually reacquiring the property in 2009.

Last February, Sotheby’s announced a $55 million expansion and redesign of the asset, designed by OMA New York. The redevelopment increased the building’s exhibition space from 67,000 square feet to more than 90,000 square feet, as reported by 6sqft.

And in June, it was announced that French-Israeli media mogul and art collector Patrick Drahi would acquire Sotheby’s through his company BidFair USA for around $2.7 billion.

Barclay’s financing retires previous debt on the trophy asset, including a $252 million BNP Paribas loan, provided in October 2019. In 2015 HSBC also provided a $325 million package to retire the $235 million Bank of America mortgage that Sotheby’s used to repurchase its headquarters in 2009.