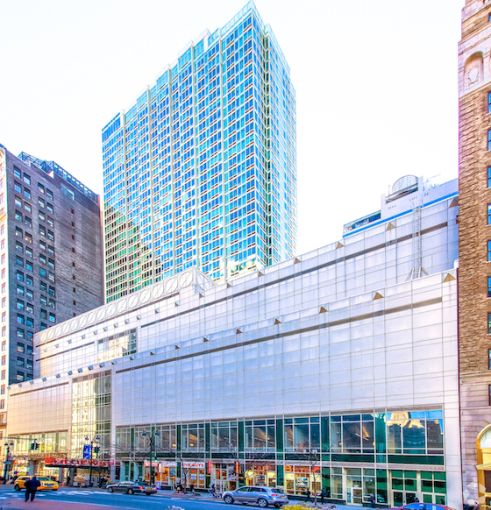 The sale of the 36-story property — also known as The Olivia — is expected to close in the second quarter of this year and includes an adjacent piece of undeveloped land, according to SL Green.

The building includes 333 residential units and 270,132-square-feet of commercial space leased to tenants like Music Choice, Landmark Education and AMC Theater. SL Green picked up the property between Eighth and Ninth Avenues for $386 million in 2013, according to the developer.

“This sale is another example of SL Green’s commitment to strategically divest of non-core assets and accretively redeploy the capital into our ongoing share repurchase program,” David Schonbraun, a co-chief investment officer at SL Green, said in a statement. “The transaction also serves to demonstrate the continued strong demand for high-quality Manhattan assets.”

CBRE’s Darcy Stacom represented SL Green in the sale. A spokeswoman for CBRE did not immediately respond to a request for comment.

SL Green has been selling off several of its buildings in recent months in order to buy back shares of its stock that’s “trading at a heavily discounted basis,” CEO Marc Holliday said in a fourth-quarter earnings call last year.

In March 2019, SL Green announced the sale of 521 Fifth Avenue to Savanna for $381 million and that October announced plans to offload the News Building at 220 East 42nd Street to Jacob Chetrit for $815 million, as Commercial Observer previously reported.