The property includes 150 units over 8.75 acres in the city of Cerritos 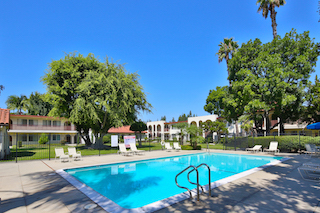 A 150-unit apartment property, named Four Trees, in the city of Cerritos has been sold for $48.6 million to a private partnership named Palos Verdes Management Company LP. The partnership is tied to managing member Gerald J. Marcil, and is based in Palos Verdes Estates in L.A.’s South Bay, property records show. Marcil has owned and managed more than 3,000 apartment units in Southern California, including in the cities of L.A., Long Beach, Carson, Torrance, and Inglewood.

The complex was owned by a trust that belongs to Jon R. Anderson and Hoag Foundation based in Santa Ana.

The 11-building property, at 18427 Studebaker Road, features 38 one-bedroom units, 92 two-bedroom units, and 20 three-bedroom units, as well as two courtyards with swimming pools, a clubhouse, and a fitness room. Cerritos spans nearly nine square miles at the southeast part of L.A. County along the border with Orange County.

“The property offers significant upside potential by renovating the exterior and interiors of the buildings,” said Lustig-Bower.

Average monthly apartment rents hit $2,527 in L.A. County in 2019 according to a recent study from RentCafe, as demand outpaces construction. The demand for housing resulted in multifamily sales in L.A. reaching all-time highs in 2019 with $9.5 billion, according to CBRE data. However, industry experts fear the state’s new rent control measures could dampen investment interest.

Robust demand kept vacancies low across the U.S., especially in metro areas like L.A., according to CBRE’s fourth quarter report. The overall U.S. vacancy rate fell to 4.1 percent for the lowest fourth- quarter level since 2000.