Multifamily Marches On in LA With New Rent Control

Despite the city's rent control laws, average rent is expected to grow by 3 percent in L.A. this year. 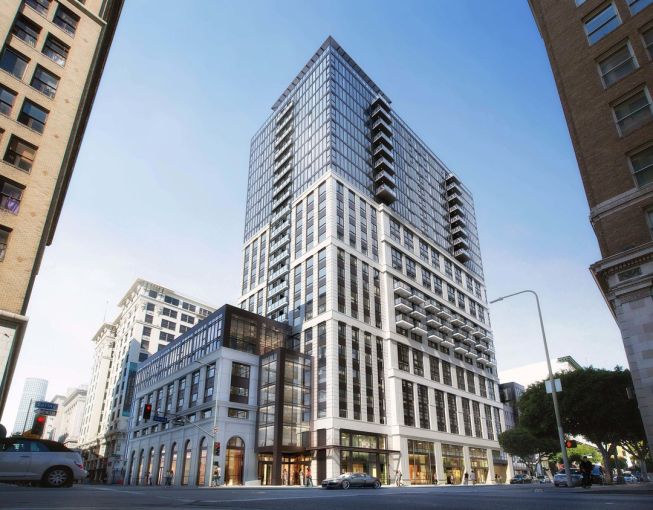 The Griffin on Spring has 275 units, and it sold in 2019 for nearly $200 million. photo: Hunter Kerhart/Holland Partner Group

Renters make up 60 percent of the population in Los Angeles, supporting a large industry for multifamily owners and landlords. But the leaders and major players of that industry are worried new rent controls will soften investment, and continue to push both renters and buyers out of the market.

Average apartment rents continued to rise in L.A. County in 2019, to an average of $2,527 per month, capping a decade in which that number inflated 65 percent over ten years, according to RentCafe. As the same issue persisted throughout the state, lawmakers enacted a new rent control law that will last for the next decade, and cap annual increases to 5 percent plus inflation.

Landlords and industry leaders fear that will immediately slow investment interest and overall production, which is what caused the housing crisis and ballooning rents in the first place.

In the city of L.A., average rent hit $2,546 in December, a 3.6 percent increase from December 2018. And, of the 95 largest cities in Southern California, 91 started this year having just experienced average rent increases between 1.4 percent and 9.4 percent, according to the RentCafe report.

Santa Monica apartments are the most expensive, with an average rent of $3,860. Long Beach experienced the steepest year-over-year increases among large cities, where apartment prices jumped 5.8 percent to $2,124.

L.A.’s vacancy rates have hovered around 4 percent throughout the past decade. Marcus & Millichap’s 2020 multifamily forecast showed rental demand outpaced construction for the past three years in L.A., which tightened vacancy to cycle-low levels to start 2020.

The forecast expects rent to jump another 3 percent this year, but it explained that new rent control measures changed local investment climates and forced investors to adjust expectations. Some investors will likely look to other markets with less restrictions like rent control, which adds a “new level of uncertainty that has restrained investor activity.”

Partly due to the new rent control measure, Greater L.A. saw a 9.8 percent drop in multifamily investment year-over-year last year, according to a 2020 outlook by CBRE. However, about 14,100 new units are expected to be completed in the city of L.A. this year, which is the third-largest total among major U.S. metros. It’s also a 58-percent jump compared to 2019, and nearly double the amount completed in 2018. This year, for example, Merlone Geier Partners and GPI Companies are set to add 642 new apartments at the NoHo West development.

Marcus & Millichap’s report expects high cost of ownership to sustain demand for rental units, and that the new rent control could alter returns on Class C investments. In-county investors and regional 1031-exchange buyers are expected to be most active in places like Koreatown, South Bay and the San Gabriel Valley.

Daniel Yukelson, executive director of the Apartment Association of Greater Los Angeles, told Commercial Observer that he expects multifamily property values to drop, and that the market will see slower multifamily investment due to rent control. He said places like Burbank and San Bernardino, which didn’t have rent control measures before recently, have already seen double-digit drops.

“It’s a big concern within our membership base,” he said. “There is an increasing reluctance to participate in multifamily and rental properties. And our base has been somewhat of a leaky bucket because so many landlords are leaving the industry or not passing down their business to the next generation. They don’t want to deal with the hassles of being a property owner.”

Yukelson and his wife owned an apartment building in Beverly Hills but bailed on the business when they “got sick of all the regulations.” And he expects that the state’s new rent control will actually encourage more city lawmakers to add even more laws or restrictions.

“It’s a challenging thing to do when all these local jurisdictions are implementing rent control in favor of renters,” he said. “Properties trade based on the income they generate, but now the fear is that the income can’t keep up with costs. […] We’re seeing property owners failing to stay afloat, bailing from the business, or selling to larger companies that can afford to buy renters out and convert the property to condos.”

Southern California still saw high activity through the end of 2019 and into this year. For example, Greendland is set to open 685 more units at its massive Metropolis project in Downtown L.A., and Gelt sold a 232-unit community in Santa Clarita for $62.5 million earlier this month. In the month of December, Cityview announced three multifamily sales in the region worth $354.9 million, and told Commercial Observer that they expect to be “very active” this year.

The L.A.-based firm unloaded a combined 760 units in the three sales, including properties in Koreatown, Warner Center and Orange County’s Costa Mesa. The properties were sold after development as part of the original investment strategy, and not because of the new rent control laws.

“After successful lease-ups of each asset, Cityview sold Baker Block for one of the highest price-per-unit sales for mid-rise multifamily rental product in Orange County, and sold The Pearl for a record-breaking price per square foot in Koreatown,” said Tony Cardoza, managing director at Cityview, via email. “Based on our experience selling The Pearl and Baker Block, we are seeing deep interest in the market for quality multifamily product in desirable West Coast urban locations.”

Cardoza added that he expects the markets to continue to provide opportunities for developers to deliver for investors.