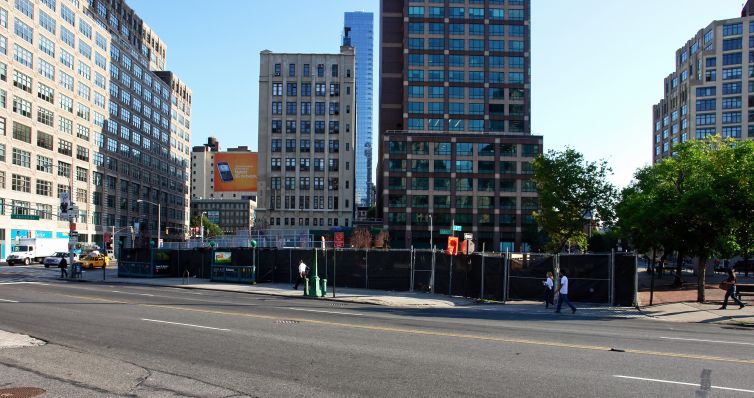 Taconic Investment Partners and Nuveen Real Estate are seeking up to $408 million in financing for their soon-to-be constructed office tower at 2 Hudson Square, Commercial Observer has learned.

CBRE’s James Millon, Tom Traynor and Ethan Gottlieb are leading the debt assignment, an offering memorandum shared with CO shows. Bids from lenders interested in providing either a construction loan or predevelopment loan were due December 6, with an anticipated closing date of January 24. Officials at CBRE declined to comment.

The Taconic/Nuveen joint venture will develop a 420,347-square-foot property at the site — which occupies a full block near the entrance to the Holland Tunnel — after acquiring its leasehold interest from Trinity Church. The deal was structured as a 99-year leasehold with a single upfront payment and no ongoing ground rent.

Crain’s New York Business first reported in October that Trinity Real Estate — the real estate arm of Trinity Church — was looking to ground lease the Hudson Square lot, and that CBRE’s Darcy Stacom had the listing. A few weeks later, Crain’s broke the news that Taconic and Nuveen were in contract to sign a ground lease on the development site.

The project is expected to be completed by March 2025.

In July 2018, Walt Disney Co. acquired the rights to develop 4 Hudson Square from Trinity Church, paying $650 million and also under a 99-year agreement. The 1.3-billion-square-foot project will occupy an entire city block and serve as the company’s new headquarters after it sold its Upper West Side campus to Silverstein Properties for $1 billion.

Disney is in good company in the burgeoning neighborhood, with Google also establishing a 1.7-million-square-foot campus in the Hudson Square submarket called — appropriately — Google Hudson Square. The tech giant’s campus will comprise 315 and 345 Hudson Street and 550 Washington Street.

As first reported by CO in August, Taconic and Nuveen also teamed up to purchase the former Disney-owned “West End Campus” from Silverstein Properties. The assets — at 125 West Side Avenue, 320 West 66th Street and Lot 61 — comprise 513,437 rentable square feet and sold for $230 million.

And last December, the joint venture acquired 440 Ninth Avenue from Unizo Holdings for $269 million, with the help of a $137 million loan from MetLife.

A spokesperson for Nuveen did not return a request for comment. Officials at Taconic weren’t immediately available for comment.