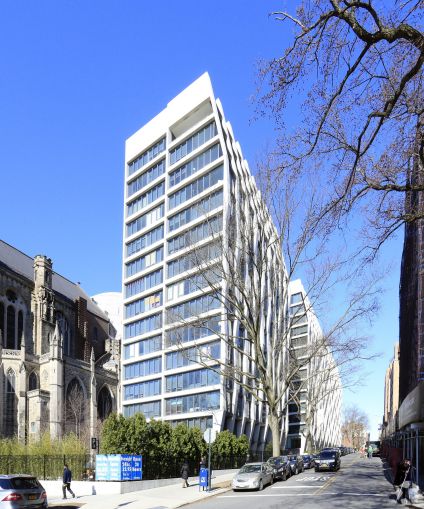 The $57 million sale of 400 West 113rd Street was the most expensive multifamily deal in the city in September. Photo: CoStar Group

Multifamily sales volume and activity plummeted around New York City last month after the sweeping rent reforms passed by the state over the summer, a report from PropertyShark found.

Sales volume of multifamily buildings fell 76 percent year-over-year across the city in September, totaling $284 million, according to the report. That’s down from $1.16 billion in September 2018 and the lowest figure on record since at least January 2018. The number is also lower than the $837 million in multifamily sales registered in Manhattan alone in September 2018, part of which was driven by $416.1 million sale of 101 West End Avenue that month, according to PropertyShark and The Real Deal.

The report also found that sales activity fell 34 percent year-over-year with 55 deals registered in September, making it the slowest month for multifamily sales in the city since at least January 2017.

PropertyShark and some industry experts blamed the slowdown on the rent reforms passed by the Democrat-controlled state legislature in June that aimed to increase tenant protections by dramatically limiting landlords’ ability to raise rents in rent-regulated apartments.

“I consider it almost an investment moratorium for anything that really has rent-stabilized products in it,” said Stephen Preuss, a vice president of sales at Cushman & Wakefield. “People are really taking a step back and still trying to digest what these rules mean and what it means for value.”

The report tracked multifamily sales of more than $100,000 in buildings that have more than five units from Jan. 1, 2017 to Sept. 30 in every borough except Staten Island. It found the Bronx was hit the hardest hit in terms of sales volume last month, with an 82 percent decrease year-over-year, with Manhattan close behind with an 81 percent drop year-over-year, according to PropertyShark. Brooklyn fell by 76 percent.

Sales activity in Manhattan didn’t look much better, with the report finding it fell by 71 percent year-over-year with only seven deals that totaled $153 million closed, the report found.

Queens was the only borough included in the study that fared well in September with its sales volume doubling year-over-year and it netting an 86 percent increase in sales activity, according to the report. Preuss, who is considered a Queens sales guru, said the borough has become an attractive market for larger, institutional investors in recent years because of its lower price points.

“We’re seeing a more flight of capital into Queens and a more diverse buyer pool,” Preuss said. “Queens hasn’t had as sharp of a rise in pricing as Brooklyn and Manhattan have had in the last cycle.”

However, Preuss doesn’t think Queens is immune to the concerns investors have over the new rent laws and PropertyShark’s year-to-date numbers show Queens multifamily sales slowing down with the rest of the city.

Preuss expects the jump in September was caused by deals already in contract that were renegotiated after it was passed.

“There was a massive renegotiation on most of the contracts,” Preuss said. “Those deals probably have just closed recently.”

But Pruess said it wasn’t all doom and gloom for New York City. While multifamily sales have faltered, Pruess said buyer interest is still high and they have just flocked to different types of assets including new developments and industrial.

“There’s an abundant amount of capital out here,” he said. “The people or the groups that have earmarked investment capital to multifamily are now looking at other types of assets.”