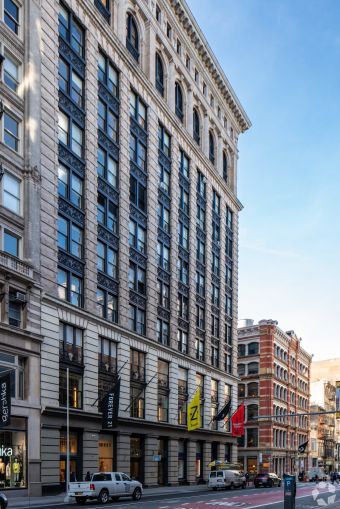 The value of a 12-story mixed-use building at 568 Broadway in Soho, owned by a trio of investors led by Allied Partners, has been marked down nearly 40 percent, or almost $132 million, by Morningstar Credit Ratings.

The action from the rating agency came just this week after it learned that the property’s roughly 19,000 square feet of ground-floor and lower-level retail space as well as 5,000 square feet of below-grade storage space leased by Artists & Fleas has hit the market.

Morningstar has appraised down the value of the asset to $208.5 million, from $340.3 million, bringing its estimated leverage level to almost 96 percent when considering a $200 million commercial mortgage-backed securities (CMBS) loan from CCRE that the owners nabbed in 2012 to refinance the building—located at the corner of Prince Street.

Morningstar’s revised loan-to-value ratio is based on a 10-year discounted cash flow metric that assumes the space will be filled within three years of when Artists & Fleas vacates the location.

The ratings agency’s commentary is backed by its estimation that the owners—a partnership between the Hadar family of Allied Partners, the Adjmi family of A&H Acquisitions and the Cayre family of Midtown Equities and Aurora Capital Associates, which has in the past acted as the owner’s rep in previous leasing negotiations—won’t be able to obtain the same rents it had charged old tenant Armani Exchange for the same ground-level space prior to its departure in January 2017.

In April 2017, Artists & Fleas—a 15-year-old company that provides a curated retail marketplace populated by local designers, artists and brands—signed a one-year lease for the 10,250 square feet of ground-floor retail space (for $175.60 per square foot, according to CoStar Group data), replacing Armani, as CO previously reported.

At the time of the 2017 lease agreement, a source with knowledge of the deal told CO that the asking rent was $250,000 per month. “Artists & Fleas is paying a rent that is substantially lower than the market rent,” the source said.

Allied Partners’ director of leasing, Bonnie Shapiro, who had worked on Artists & Fleas’ license agreement in 2017, could not immediately be reached.

Morningstar’s commentary revolves around the health of the $200 million CMBS loan and the fact that the property’s cash flow dropped almost 14 percent from 2017 to 2018 after Armani vacated, plummeting by roughly 35 percent from the time the loan was issued in 2012.

Although Armani had occupied about 3 percent of the building’s roughly 305,000 square feet of leasable space, it alone represented 29 percent of the property’s total rent, according to Morningstar.

Aurora’s current listing for the ground-floor space matches that of CoStar, while its listing for the 9,000 square feet of lower-level space is at $100 per square foot per year over the same term. It’s marketing the two spaces as one, combined 19,250-square-foot space.

Allied, with partners the Chayre and Adjmi families, bought the building (originally built in 1897 and last renovated in 1994) for $87.5 million, or $286.51 per square foot, from Long Island-based Shelbourne REIT in 2003 at a roughly 7.7 percent cap rate; the deal was facilitated by a $55 million first mortgage loan from M&T Bank, according to information from CoStar. The building, which includes 69,000 square feet of retail space and 285,000 square feet of office and storage, was 98 percent leased at the time of sale and had been appraised at $94 million in 2004.

The 10-year, interest-only $200 million CMBS loan used to refinance the asset carries a rate of 4.3 percent and was split into two pari passu notes. The first is a $125 million bill that represents 13.3 percent of the remaining collateral behind the $750.8 million COMM 2012-CR4 transaction; and the second is a $75 million note comprising 7.6 percent of the remaining balance within the $866.9 million COMM 2012-CR3 deal. The loan’s maturation is scheduled for October 2022.

Currently, the largest tenant in the building is Group Nine Media—the company that operates outlets such as NowThis, Thrillist, The Dodo and Seeker—which occupies almost 95,000 square feet spread across floors four through six and 10 through 11 on a lease dated September 2017, according to CoStar. In November 2016, online medical care booking service ZocDoc inked over 80,000 square feet across the second and seventh through ninth floors on a lease that expires in March 2028.

Forever 21 currently leases about 10,000 square feet of the building’s ground-level retail space, according to CoStar.

About eight percent of the asset is vacant, besting the overall submarket vacancy rate of around 8.5 percent for similar mixed-use properties.