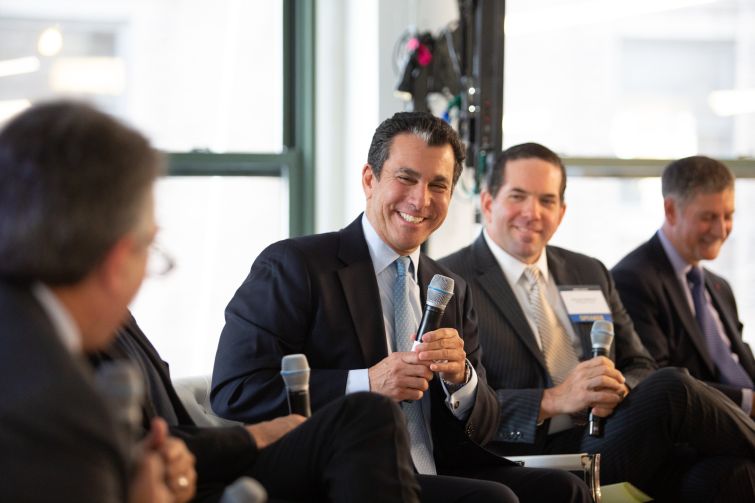 Midtown office landlords are all aboard the lifestyle-community-hospitality train as they attempt to reinvent their buildings to appeal to a younger, more relaxed generation.

Or so say the office landlord greats.

At the Commercial Observer’s annual Midtown Forum, three office landlords, Rob Lapidus of L&L Holding Company, Marty Burger of Silverstein Properties, and Winston Fisher of Fisher Brothers sat on a panel discussing what it takes to stay relevant in the current office market.

They were joined by star office broker Peter Riguardi of JLL and Vincent Martino, the managing director of JP Morgan Chase, which is demolishing their Midtown headquarters at 270 Park Avenue and building a 2.5 million-square-foot replacement.

“We’re almost in the hospitality business now,” Martino said. “It’s not about necessarily just leasing space and filling tenants, and getting a nice stabilized rent roll; it’s about making sure you’ve got the right tenants, the right amenities, the right tenant mix, to curate that experience.”

Instead of the old “nine to five” paradigm, much of the workforce now spends “five to nine” working, though not necessarily at the office, according to the panelists.

“The new employee values connectivity and lifestyle, and a work-life balance,” Riguardi said. “That’s what making Midtown South, and other burgeoning communities, so successful and in some cases, really outperform Midtown.”

For companies that are catering to two sets of employees, the traditional suit-and-tie generation, and the younger digital teams, they sometimes consider separate offices in order to accommodate both, Riguardi said.

Martino pointed out that like many companies with large tech teams, JP Morgan Chase is competing for the same talent as the tech giants. It was one reason they decided to build their headquarters anew, rather than reinvent the existing one. “We spend a lot of time really thinking about how we’re reimagining our space for the workforce of the future,” he said. “And what we found is that in order to attract and retain talent for the workforce of the future…we were challenged to operate in an environment built for the workplace of yesteryear.”

The group also agreed that whereas in the past, the retail in an office building was almost an afterthought, now it’s crucial to creating a building with the lifestyle amenities that workers want. Owners may want to aim at leasing the retail space first, rather than last, they said.

“It’s not just getting the highest rent, but actually does something that enhances the value for the tenant,” Fisher said.

Lapidus said that when an L&L had a vacancy at 200 Fifth Avenue, they put in the first Eataly market, even though it wasn’t the highest rent by any means.

“When we’re underwriting, we rationalize, ‘Oh it’s going to give a boost upstairs, so we can lose money on this,’” Lapidus said. More importantly, it was a boon to the entire community.

Jonathan Mechanic, chairman of Fried Frank’s real estate department, moderated the panel, which was hosted by RXR Realty, in the Helmsley Building at 230 Park Avenue on Wednesday.