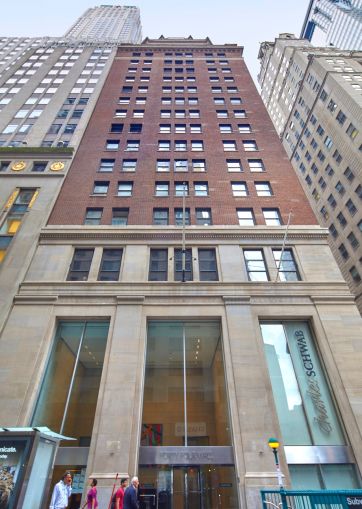 WeWork has nailed down three new leases totaling nearly 55,000 square feet in Midtown South and the Financial District for its Headquarters by WeWork offering, the company announced this week.

The coworking giant has sealed a deal for 26,600 square feet across the second and third floors of the 12-story building at 33 East 33rd Street between Park and Madison Avenues in Midtown South. Erik Harris from Newmark Knight Frank represented the landlord, Elk Investors. Harris didn’t immediately respond to a request for comment via a spokeswoman.

In the second-largest lease, WeWork took 17,350 square feet on the 22nd, 23rd and 24th floors at EQ Office’s 44 Wall Street. Scott Silverstein represented EQ Office in-house, along with a team from CBRE. A spokeswoman for the brokerage declined to comment. The 24-story building also recently landed marketing tech firm Contently as a tenant in 13,146 square feet. Asking rent for WeWork’s space wasn’t available, but the asking rent for Contently’s offices was in the low to mid-$60s per square foot, Commercial Observer reported last month.

“44 Wall caters to growing companies and its tenant roster includes some of the city’s most innovative creative, media, tech and fashion companies,” Silverstein said in a statement. “The penthouse floors of the tower are truly unique and present the perfect boutique office environment for WeWork to establish its next successful HQ location.”

The smallest new location is at 7 West 18th Street between Fifth Avenue and Avenue of the Americas near Union Square. The shared-space provider leased 10,750 square feet on the fourth and fifth floors of the nine-story building owned by George Comfort & Sons and ASB Real Estate Investments. The landlords were represented in-house by Matt Coudert and Alex Bermingham. A George Comfort spokesperson declined to comment.

WeWork plans to open all three outposts this summer. Lease terms were not available for any of the transactions. Arash Gohari, an executive vice president at WeWork, led the team that negotiated all three deals.

The transactions bring the number of locations up to 38 for Headquarters by WeWork (formerly HQ by WeWork), which subleases space to midsize businesses. WeWork nailed down 45,000 square feet for the single-tenant division last week at 1410 Broadway, as CO reported.

“The signing of these new locations—located in FiDi, Chelsea and Midtown—reflects the incredible demand we are seeing from medium-sized companies across Manhattan as a whole,” said Granit Gjonbalaj, WeWork’s chief real estate development officer, in prepared remarks. “We now have close to 40 locations for our Headquarters by WeWork offer and intend to continue expanding our footprint, both in the city and elsewhere, with a target of having 270 locations by the end of the year.”