Spreading the Wealth: More and More Developers Are Trying Their Hands at Lending 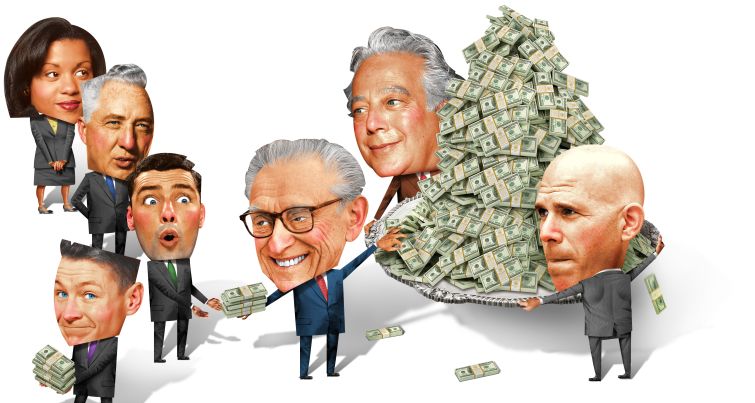 More than a decade after the 2008 crisis, some banks remain cautious when it comes to financing commercial real estate, and especially new construction.
So what’s a developer to do? Become the bank itself.

Developers with lending platforms are nothing new, with firms like Vornado Realty Trust, Related Companies and SL Green Realty Corp. operating on this side of the business for decades (and the latter landlord’s co-CIO even appearing on CO’s Power 50 list year after year). Recent years, though, have seen a number of fresh entrants, with companies like the Moinian Group, RXR Realty, Silverstein Properties and the Naftali Group launching lending ventures.

This trend stems from a variety of factors, including the banking industry’s pullback as well as a run-up in asset prices that made some developers hesitant to invest on the equity side of the equation.

Due to more stringent regulation and a more risk-averse posture, commercial banks often “just can’t get to the proceeds level that borrowers want,” said David Hochfelder, the head of acquisitions at Naftali. “So there’s this gap in the capital stack that developers who know the real estate really well are filling.”

“You’re seeing banks pull back in spaces, certainly like any high-yield lending, and definitely construction lending as well, because of the increased scrutiny from regulators,” agreed Jonathan Chassin, the head of Moinian Capital Partners.

Additionally, the increased regulatory requirements and scrutiny have “made it much more attractive for banks to finance other [lenders] than to directly lend on certain asset classes,” said Michael May, the president of Silverstein Capital Partners, which launched in late 2018.

“If you just look at the regulatory and accounting treatments, if a bank were to make a loan to a non-bank like me, they would get much better regulatory capital treatment than they would if they made the loan directly [on a development project],” May said. “So the repo [facility] side has become much, much bigger…and the result is this provides a tremendous amount of liquidity for non-banks that hasn’t been available previously.”

At the same time, as booming asset prices left some developers sitting on the sidelines, moving into lending has provided them with a way to stay in the game.

The influx of capital from China and other sources in recent years “really drove prices way above where traditional New York real estate players—developers or just equity owners—would buy assets,” Chassin said. “And that prompted a lot of firms, including [Moinian], to look at lending as an alternative use for capital while they [waited] for cap rates to come down.”

Naftali, too, found itself pulling back as prices peaked several years ago.
“We were very busy on the development side from 2010 until the end of 2014,” said Hochfelder, “and then when pricing got really [high], we just stopped buying stuff.”

He added that Naftali resumed its acquisition activity in early 2017, but said that the firm continues to see its lending business as providing opportunities to participate in deals it might otherwise sit out.

“On a risk-adjusted basis there might be deals where we don’t necessarily feel comfortable with the equity valuation, but that doesn’t mean we wouldn’t lend on the assets for a lower return with a more secured position,” he said.

“There are many occasions where you look at a deal and you just don’t necessarily have the same aggressive view or rent growth or cap rates or whatever other market assumptions drive the value of a building, and so you lose [bidding for] buildings by 3 percent or 5 percent,” he said.

He gave the hypothetical example of a building on which Silverstein bid $950 million but that ultimately went to another buyer at $1 billion.

“Then it goes out for financing, and Silverstein looks at the building and says, ‘Wow, we would have bid $950 million. If my loan is $800 million, that’s a spot where if I were to have to take it over and operate it, I’d be very, very comfortable,’ ” May said. “So it can give us a second bite at the apple in terms of using our expertise and the time and energy that we put into the equity side to get an opportunity to make money on the debt side.”

The notion of a developer-lender like Silverstein taking over a project might for some borrowers raise the specter of a loan-to-own scenario.

May insisted Silverstein is “very specifically not writing loans with the intention of taking over [the project]. We’re trying to do high-quality loans that don’t default. We’re not in the loan-to-own business.”

That said, “we’re not scared about what would happen were we to have to take over or manage a property,” he added.

Chassin said he sees Moinian Capital Partners filling a higher-risk niche where banks and larger funds like Blackstone or Brookfield Property Partners may be hesitant to play.

“For banks, construction lending is a regulatory nightmare…and the largest funds have raised money from pension funds and sovereign wealth funds and so on where they can find things to do at 6 percent to 8 percent returns and fill up their fund that way,” he said. “We are generally looking for 10 percent-plus returns.”

Chassin said Moinian targets around $500 million in originations per year, with a focus on markets in which the firm owns or has recently owned properties like New York and South Florida. In July, the company provided Marx Development Group with a three-year $125 million loan to refinance its Courtyard by Marriott hotel at 71 West 35th Street and 10th Avenue. Moinian provided the original loan, as well.

Naftali aims to lend around $100 million this year, Hochfelder said. The company announced this March it closed a $65 million construction loan for a 74-unit condominium building at 107-02 Queens Boulevard in Forest Hills, Queens, being developed by RJ Capital Holdings and RB Realty Capital. Naftali took the mezzanine portion while sourcing CIT Bank as the senior lender.

Hochfelder noted that the two deals the company has closed to date were for condo building construction loans but that looking forward he sees opportunity to move into condo inventory lending.

“There are a lot of people who built condo buildings that aren’t sold out,” he said. “So I think that trend will probably continue for the foreseeable future.”

Hochfelder said Naftali was looking at deals in cities including Miami, Los Angeles, San Francisco, Seattle and Chicago, but that it had yet to close on anything outside New York City.

Silverstein has likewise lent exclusively on New York City projects thus far but is currently bidding on deals in Seattle, Los Angeles, Boston and Washington, D.C., May said, like 9 DeKalb Avenue in Downtown Brooklyn where the firm issued a $240 million mezzanine loan.

Chassin suggested that the recent trend of developers moving into lending may have peaked, however.

“This has all sort of worked its way through the system over the last few years,” he said. “A year ago, you were still seeing a lot of people pop into the lending space, but you haven’t seen that many new guys over the last 12 months.”